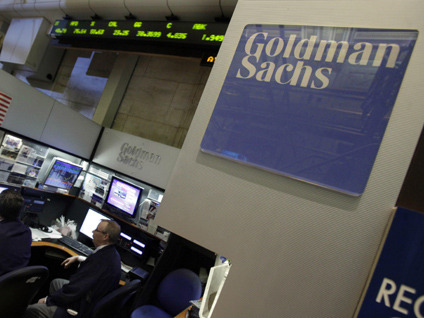 Goldman Sachs announced this morning that , on revenue of $12.78 billion — well above analysts' expectations.

But that positive news will likely be overshadowed by fallout surrounding the unprecedented civil suit in which the federal government is charging the investment bank with fraud.

In the first-of-its kind complaint filed Friday, the Securities and Exchange Commission alleges that Goldman misled investors when, in 2007, it knowingly sold a group of risky mortgages that was secretly designed to fail.

Goldman said the charges are completely unfounded, and adds it will vigorously contest them and defend its reputation.

When asked on CBS' "The Early Show" if the charges represent a clear case of a company trying to defraud its customers, former New York Governor Elliot Spitzer (who as state attorney general had prosecuted cases of white collar crime and securities fraud) said the word "clear" is one over which people will argue.

"They maintain of course that they disclosed everything they needed to disclose," Spitzer said of Goldman Sachs. "The SEC is saying they kept material information from the marketplace. If I had to bet, I would say the SEC wins at the end of the day because materiality is determined after the fact, and right now looking backwards, the fact that somebody other than Goldman made the choice about what mortgages to put into the CDO [the collateralized debt obligation] does look material."

"Because that decision was made outside of them?" anchor Harry Smith asked.

"By people intending that those [CDOs] lose money, that fact was not revealed," Spitzer said. "The investors in this product had all the information about the qualities of the mortgages; they just didn't know who chose them. And so that is where the legal dispute will come in."

When asked if the SEC case has legs, Spitzer said, "I think it's a reasonably strong case. Again, I don't like to bet on the outcome of cases like this, but I think it raises the much more important question: Why are taxpayers bailing out Goldman Sachs if this is what they're doing? Is this what investment banks should be doing? Is this where we need our money to be going?"

Although the SEC Board was reportedly split along partisan lines on whether to bring the suit, Spitzer did not think the decision to announce it in advance of the Obama administration's push for financial reform legislation was politically motivated [which the White House also denied].

"The SEC is trying very hard to say 'We're being tough, we're protecting the consumer,'" he said. "I happen to believe they wanted to bring an important case before the bill reached the floor of the Senate. That's a legitimate prosecutorial objective. I wouldn't say politics — I would say they're flexing their muscles."

When asked to predict if the reform bill will pass, Spitzer responded, "It will happen, but it's not fundamental enough. The critical issue is what should the investment banks do with all the money we've given them? They're not investing it where we need it to go, into the guts of our economy. [Instead] they're playing games like this."

"I absolutely expect that the SEC will bring more cases against other financial institutions — we just don't know which ones and for what just yet," SEC enforcement lawyer Jacob Frenkel told CBS News business correspondent Rebecca Jarvis.