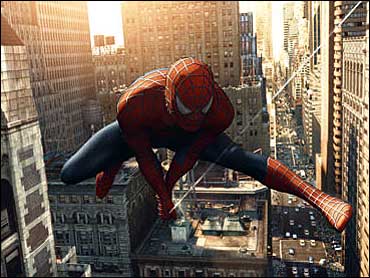 "Spider-Man 2" took in $40.5 million in its first day, a record debut that positions the film to challenge more box-office highs through the Fourth of July weekend.

"We are off to a phenomenal start on what looks to be a magical six days for `Spider-Man 2,"' Jeff Blake, vice chairman of the film's distributor Sony, said Thursday.

Ticket sales Wednesday surpassed the previous debut record of $39.4 million that the original "Spider-Man" grossed in its first day two years ago.

"Spider-Man 2" could go on to shatter other debut records, including the best three-day weekend gross of $114.8 million for "Spider-Man," said Paul Dergarabedian, president of box-office tracker Exhibitor Relations.

With the long holiday weekend, the film likely will set a record for biggest first six days, topping the $146.9 million haul for last year's "The Matrix Reloaded," Dergarabedian said.

On Friday or Saturday, the film also might have a shot at breaking the single-day gross record held by "Shrek 2," which raked in $44.8 million in its second day. "Shrek 2" also holds the record for highest gross in its first five days at $129 million, another mark "Spider-Man 2" could approach.

The opening-day figure for "Spider-Man 2" was more remarkable since it came on a Wednesday, when business is slower than on weekends. The first "Spider-Man" debuted on a Friday.

"We're in uncharted territory looking at midweek numbers this big," Dergarabedian said. "I remember when $40 million was a big opening weekend for a movie not that long ago, and now that's a single day in the middle of the week."

The best previous debut for a movie opening on Wednesday was $34.5 million last December for "The Lord of the Rings: The Return of the King."

Tobey Maguire is back as the Marvel Comics superhero, a brooding college kid struggling to make ends meet and juggle long nights of crime fighting with the demands of school. Kirsten Dunst, James Franco and other key cast members also are back, and Alfred Molina co-stars as Spider-Man's new nemesis, Doc Ock.

Maguire's casting initially turned some heads in Hollywood, since he was a rising serious actor who did not fit the usual mold of the beefy movie superhero. The $403.7 million domestic total for "Spider-Man" silenced any casting critics.

"He's not about the brawn. It's about the pathos and brain," Dergarabedian said. "Tobey Maguire had credibility as an actor going in, and he hasn't lost any credibility by doing `Spider-Man.' "Seabiscuit' came out after `Spider-Man,' and he's so good that when you saw him in that movie, you didn't go, `Oh, that's just Spider-Man on a horse."'

Sony originally scheduled "Spider-Man 2" to debut the Friday before July 4, then moved it up two days to get a jump on the holiday weekend.

With many people off work Monday, the film should draw big audiences that day. Business on Sunday might be slow, though, since that's the Fourth of July, when many people will opt for barbecues, parades and fireworks displays instead of going to the movies.

A rainy Sunday might boost business, but Rory Bruer, Sony's head of distribution, said, "I'm not praying for rain."

"We've had such astounding reviews throughout the country, and I think people are totally keyed in to what an incredible film Sam Raimi has delivered," Bruer said. "Come rain or shine, they want to come see this movie."