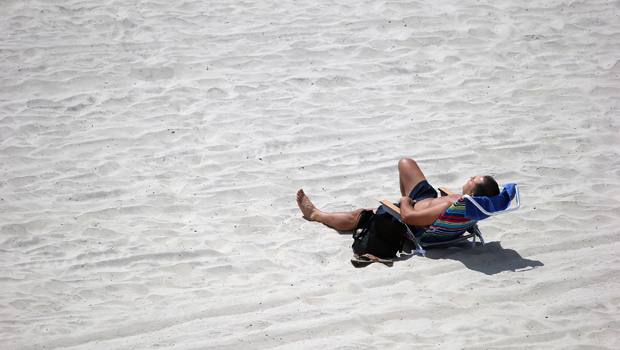 Taking the day off tomorrow on Labor Day? "It's about time" says our contributor Faith Salie ...

In tribute to the tireless American workers whom this day honors, I hope you're working hard at doing nothing.

And I don't mean that ironically: Taking a holiday makes us better at our jobs. It gives us a chance to unplug and reboot (and other technological metaphors that didn't exist when Labor Day was made a national holiday 120 years ago).

However, the average American worker leaves four vacation days unused, according to Expedia. In the past year, collectively, Americans chose not to take more than 500 million available days off from work.

Why aren't we pushing back from our desks?

The most common reason given is to accumulate days for possible future trips. But there are less hopeful reasons, too -- some workers say they can't afford a vacation. Others say "work is their life."

And some fear a boss' view of an employee who takes his or her full time off. Indeed, when asked about workers who use all their vacation days, 15 percent of managers described them as less dedicated, 15 percent as less productive, and 10 percent as less likely to be promoted.

If only your boss understood that you'd come back with a souvenir for her that says, "My employee went to the beach and all I got was this lousy T-shirt . . . plus renewed drive and refreshed company loyalty!"

It's time to rethink the American work ethic.

According to the Center for Economic Policy Research, the U.S. is the only advanced economy that does not require employers to provide paid vacation time. Almost a quarter of Americans receive no paid holidays, and most of those folks are low-wage workers and small business employees.

Everybody needs a break, especially the guy who fished your mother-in-law's watch out of your toilet, and the lady who remembers to make your decaf chai with vanilla almond milk.

To put it in perspective, workers in the European Union are legally guaranteed at least 20 paid vacation days per year. What about the industrious Japanese? They get at least 10 days.

Before you dismiss vacations as something that will make Americans as soft as fine French cheese, consider this: if we used all our time off, our economy would benefit from more than $160 billion in sales and would support 1.2 million jobs [according to "An Assessment of Paid Time Off in the U.S." by Oxford Economics, February 2014].

Let's not make the American work ethic face time and overtime. It should be vision and innovation, and we need a bit of fresh air for that.

Boldness is not bred in cubicles.

Are we done? Good, good, 'cause I need a vacation.