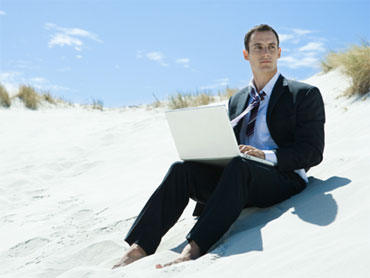 It's Memorial Day weekend. Get up! There's no time for lazing in a hammock for those who live in an all-work-no-play world. And just who lives in such a non-stop busy land? Why, any American who doesn't enjoy the right to a summer vacation. Our Cover Story is reported by Jim Axelrod:

This Memorial Day weekend . . . our unofficial start to summer . . . many Americans will look ahead to the next couple of months and their vacation plans. But not as many as you might think.

One in four American workers does not have paid vacation provided by his employer.

"And we don't have any law that would require any employer to do that," said John Schmitt, an economist at the Center for Economic and Policy Research.

He's the author of a study detailing one unique feature of our economic system that's not the envy of the rest of the world: Out of the 33 richest countries, the U.S. is the only one with no legally-required paid vacation for its workers.

"If you look at all of the other rich countries that have about the same standard of living that we have, it's pretty standard to have 20 or 25 days of paid vacation per year," said Schmitt.

Flying dogs to their forever homes

And the United States is the only country to have zero.

The average American has just nine days of vacation a year. One survey shows only 10% of us will take a full two weeks off.

And as for part-time workers, only a third get any paid time off from their employers.

Schmitt says we have a tortured relationship with vacation in the best of times . . . and the recession's only made it worse:

"Even when times are good, people don't take their vacation - they don't want to be seen as 'That guy who's always taking his time off,' who values his time off more than being at work," said Axelrod.

"Yeah, it completely intensifies the pressure on workers to buckle down and work as hard as they possibly can, so that if the boss has to make a decision about letting ten percent of people go, that you're not on that list," said Schmitt.

"There's no question we're different," said Cornell University economics professor Steven Kyle. "But it's because we choose to be, not because we can't afford to be. We are as rich as the Europeans are. We would be a little less rich in material terms if we took more time off as a nation. But we would be, some of us at least, happier to do that."

Kyle said it all comes down to a society's position on vacation.

Is vacation a perk? Or is it something that is an essential, like good healthcare or a good job - getting enough vacation to be healthy and regenerated?

"Well, I don't think it's a perk personally," said Kyle. "And I have a very good job that I love. But what are we doing this for, our jobs, if not to have a life and have a good life?"

Alan Grayson is adamant that vacation is a right.

"You need time off to recharge the batteries and to make yourself happy," he said.

In fact, he wants to make it a law - which he's in a better position to do than most, since he's a Congressman . . . a freshman Democrat from Orlando, of course considered the vacation capital of the world.

Grayson wants to guarantee a least one week of paid vacation for every worker at a company with a hundred or more employees. He says it will lead to greater productivity from well-rested and healthier workers.

Of course, this might not be the best week to point to the way Europeans run their economies. With Greece near insolvency, Spain also teetering, and the rest of Europe shaken, everything is now on the table as far as easing economic pressures there.

Well, everything but vacations.

Why? Horst Freitag, Germany's Consul General in New York, said it's because "the employers feel that they benefit from that law, primarily because they also feel that it has positive effects on the productivity.

"Now we had a lot of reforms just recently regarding our working force, et cetera, fringe benefits, unemployment protection, or what have you. Nobody - either the legislative or the unions, the employers - nobody touched the vacation," said Freitag.

We sat down with Freitag; Sabine Ulmann, the Deputy Consul from Switzerland; and Torben Getterman, Denmark's Consul General. All three countries have had national vacation laws on the books for decades.

Denmark, said Getterman, provides for five weeks, mandatory - everyone from the factory worker to a high-priced lawyer.

Denmark's unemployment rate, by the way, is three points lower than ours at the moment.

As for Switzerland, Ulmann said, "I think the first paid vacation came in 1937, and it was in the watchmaker industry to give people possibility not to be over-exhausted, not overworked, and to give the opportunity of feeling more relaxed and more comfortable."

"Wait a minute: You're not worried when you take your vacation that the guy at the next desk is going to get ahead of you while you're gone?" asked Axelrod.

"But, that's the point of it. If I'd be worried about that, you probably wouldn't take the vacation," said Freitag. "That's why it's legal. It's in the law. It's in the book. This was set."

The U.S. economy - with weaker unions than Europe, and less regulation - has higher growth rates and higher salaries. But European workers consistently rate themselves more satisfied with the balance in their lives.

"I have a feeling if I were to run that idea by some members of the business community in the United States, they might say, 'You know what, that sounds like a European idea, the balance,'" Axelrod said.

"Yeah, I mean, we think it's a good idea," said Getterman. "It's a good foundation for creating a society where you have respect for, let's say, both the family life and the working life."

Some food for thought to throw on the grill this Memorial Day weekend, when you might already be feeling like you won't get nearly enough time off this summer.

The rest of the world has a different recipe when it comes to vacation.

"You can't always attach a price tag to something," said Freitag. "There's some things in life that you can't pin down in dollars and cents."


For more info:
Center for Economic and Policy Research