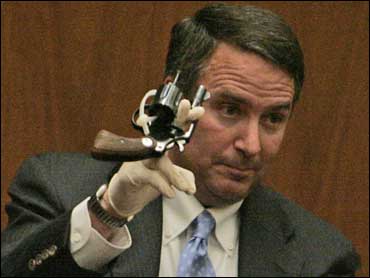 Jurors in the murder trial of music producer Phil Spector on Tuesday saw the bloody revolver that was found at the feet of the actress he is accused of killing in his home.

Los Angeles County sheriff's Det. Mark Lillienfeld donned gloves before removing the gun from an envelope because of the blood still on it. He used photographs to point out a holster in an open drawer of a bureau near the spot where Lana Clarkson's body was found was slumped in Spector's foyer. The holster was later shown to fit the gun, Lillienfeld said.

Clarkson, 40, died from a shot fired with the gun in her mouth early on Feb. 3, 2003. She had accompanied Spector to his Alhambra mansion after meeting him at her job as a hostess at the House of Blues just hours earlier.

Prosecutor Pat Dixon had Lillienfeld point out in the photographs a leopard-print purse that hung over Clarkson's right shoulder. Her right hand rested atop the purse, which sat on the floor.

The coroner who conducted Clarkson's autopsy and ruled her death a homicide testified previously that the presence of the purse on her shoulder was one of the non-medical observations that led him to rule out suicide.

Spector, 67, rose to fame with the hit-making "Wall of Sound" recording technique in the 1960s. Clarkson was best known for her role in the 1985 movie "Barbarian Queen."