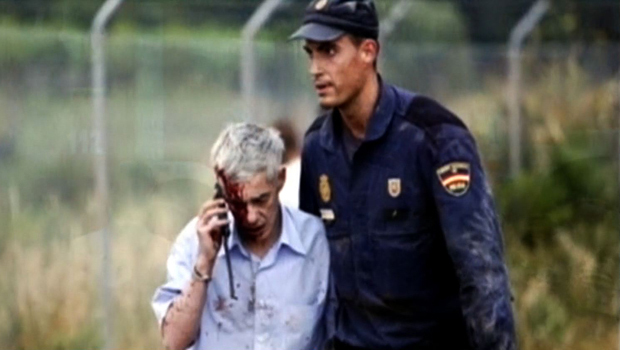 SANTIAGO DE COMPOSTELA, Spain Spanish police on Friday detained the driver of a train that crashed in northwestern Spain, lowered the death toll from 80 to 78 and took possession of the "black box" of the train expected to shed light on why it was going faster than the speed limit on the curve where it derailed.

A conversation the driver had with station officials immediately after the accident isn't helping his cause, Robert Nisbet of CBS News' British partner Sky News reported on "CBS This Morning" from Santiago de Compostela.

And in an interview with The Associated Press, an American passenger injured on the train said he saw on a TV monitor screen inside his car that the train was traveling 121 mph seconds before the crash — far above the 50 mph speed limit on the curve where it derailed.

Garzon Amo was officially detained in the hospital where he was recovering, said Jaime Iglesias, the National Police chief of the Galicia region where the crash happened just on the outskirts of the regional capital, Santiago de Compostela.

Iglesias said that Garzon Amo would be questioned "as a suspect for a crime linked to the cause of the accident."

The driver, under guard by police, cannot yet testify because of his medical condition, Iglesias said, adding that he did not have details of the medical condition but that it could delay efforts by police to question him.

The revised death toll from 80 to 78 came as forensic scientists matched body parts with each other at a makeshift morgue set up in a sports arena in Santiago de Compostela, said Antonio de Amo, the police chief in charge of the scientific service for Spain's National Police.

De Amo said police are still working to identify what they believe are the remains of six people, and that the count could change as they continue their work associating body parts with each other.

An American victim was identified by the Diocese of Arlington as Ana Maria Cordoba, an administrative employee from northern Virginia. Also among the dead were an Algerian and a Mexican, Spanish police said Friday.

Gustavo Angel confirmed to CBS News that his daughter, Cordoba, 47, of Arlington, Va., died in the crash. He said he was told of her death by authorities Thursday afternoon.

Angel said Cordoba was on holiday in Santiago de Compostela for two weeks with her husband and daughter. They were visiting the couple's son, an exchange student at a local university.

Cordoba's husband has skull injuries, and her daughter has a broken leg, and both are hospitalized, Angel said, adding that the son wasn't on the train.

Investigators, meanwhile, have taken possession of the "black box" of the train, which hurtled at high-speed along a curve and derailed, and will hand it over to the investigating judge, Iglesias said, adding that the box had not been opened yet.

The box records train's trip data, including speed and distances and braking and are similar to flight recorders for airplanes.

Court spokeswoman Maria Pardo Rios said analysis will be performed on the device but she declined comment on how long the analysis will take.

Stephen Ward, 18-year-old Mormon missionary from Utah, said he was writing in his journal when he looked up at the monitor and saw the train's speed. Then, he said, "the train lifted up off the track. It was like a roller coaster."

Seconds later, Ward remembered, a backpack fell from the rack above him and he felt the train fly off the track. That was his last memory before he blacked out on impact.

When Ward woke up, someone was helping him walk out of his train car and crawl out of a ditch where the car had toppled over. He thought he was dreaming for 30 seconds until he felt his blood-drenched face and noticed the scene around him.

"Everyone was covered in blood. There was smoke coming up off the train," he said. "There was a lot of crying, a lot of screaming. There were plenty of dead bodies. It was quite gruesome."