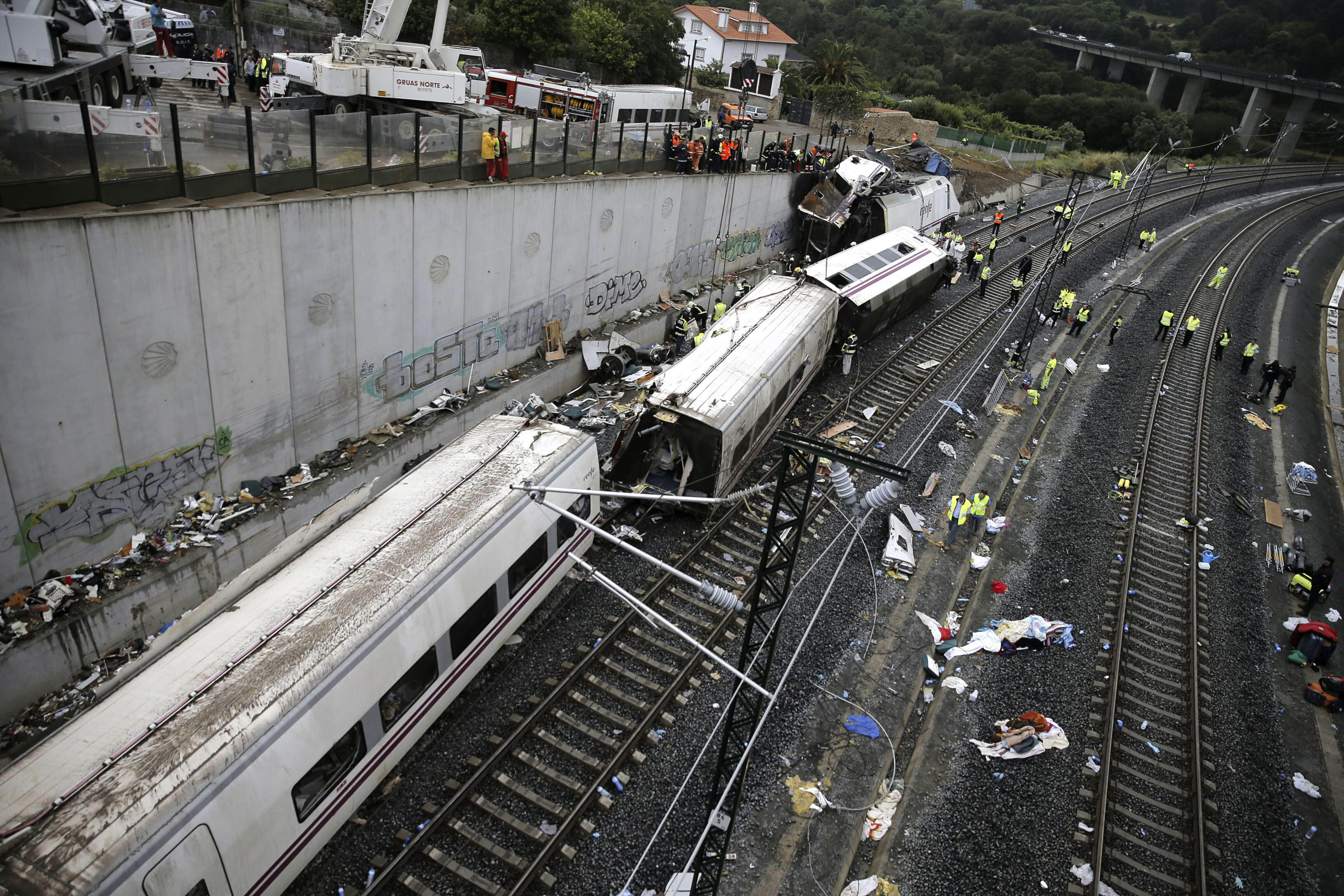 Police examining the remains of those killed in the derailment lowered the death count Friday from 80 people in all to 78, and said the count could change as they identify body parts and associate them with others.

Antonio de Amo, of Spain's national police, says the changes have happened as forensic scientists have matched body parts with each other.

He told reporters Friday that 72 bodies have been identified so far and that six remain to be identified.

Investigators, meanwhile, have taken possession of the "black boxes" of the train, which hurtled at high-speed along a curve, then derailed.

Gustavo Angel confirmed to CBS News that his daughter, Ana-Maria Cordoba, 47, of Arlington, Va., perished in the crash. He said he was told of her death by authorities Thursday afternoon.

Angel said Ana-Maria was on holiday in Santiago de Compostela for two weeks with her husband and daughter. They were visiting the couple's son, an exchange student at a local university.

Ana-Maria's husband has skull injuries and her daughter has a broken leg, and both are hospitalized, Angel said, adding that the son wasn't on the train.

By all accounts, the train was going way too fast as it curled around a gentle bend. Then in an instant, one car tumbled off the track, followed by the rest of the locomotive, which seemed to come apart like a zipper being pulled.

The derailment sent pieces of the sleek train plowing across the ground in a ghastly jumble of smashed metal, dirt and smoke.

And a day the disaster -- which also injured scores of other people -- one question surpassed all others: Why was the train going so fast?

Investigators opened a probe Thursday into possible failings by the 52-year-old driver and the train's internal speed-regulation systems.

Experts said one, or both, must be at fault for the disastrous Wednesday night crash of the train that was carrying 218 passengers and five crew members to Santiago de Compostela, a destination of Catholic pilgrimage preparing to celebrate its most revered saint.

Instead, this stunned city of nearly 100,000 converted its sports arena into a shelter for the dead and grieving.

Many aboard the train were Catholic pilgrims heading for Santiago de Compostela's internationally celebrated annual festival honoring St. James, a disciple of Jesus whose remains are said to rest in a church shrine. Since the Middle Ages, the city has been the destination for Christian faithful walking the mountainous El Camino de Santiago trail, or "The Way of St. James."

Santiago officials canceled Thursday's festivities and took control of the city's indoor basketball arena to use as a makeshift morgue. There, relatives of the dead could be seen sobbing and embracing each other.

Michael Donahue, director of communications of the Diocese of Arlington, Va., where the Cordobas are members, called it an "incredibly sad day."

He told CBS Washington, D.C. affiliate WUSA-TV, "(Ana-Maria's) son, Santiago, had just completed the pilgrimage. It can take sometimes many days and it can be arduous. And Ana Maria and her husband and daughter were traveling to meet up with him, to celebrate the Feast day and his completion of the pilgrimage.

"I'm sure they were looking forward to it. I can only imagine how horrible it must have been for their son, you know, waiting for them to arrive, and to hear the news of this terrible tragedy. And for the Christian community across Spain, and all over the world, it's just a horrible story. It's just brought home close to us because of Ana Maria's death."

Spain's head of state, King Juan Carlos, said, "All Spaniards feel the pain of the families," as he and Queen Sofia met hospitalized survivors of the crash 2-and-a-half miles south of Santiago de Compostela. The royal couple dressed in funereal black.

"For a native of Santiago like me, this is the saddest day," said Prime Minister Mariano Rajoy, who toured the crash scene and declared a national three-day mourning period.

The regional government of Galicia, in northwest Spain, said 94 people remained hospitalized, 31 of them in critical condition, including four children.

The U.S. State Department said that, in addition to Cordoba, at least five Americans were hurt and cautioned that those figures could be revised upward.

Many victims suffered severe burns as the train's diesel fuel ignited a fire that caught some passengers trapped in mangled upside-down carriages. Emergency officials took DNA samples from the most heavily burned or the unconscious in an effort to identify both the living and the dead.

Rafael Catala, a senior transport official in Spain's Development Ministry, told radio network Cadena SER that the train appeared to be going much faster than the track's speed limit of 50 mph as it approached the city.

Breathtaking footage of the crash captured by a railway security camera showed the moment when the eight-carriage train approached a left bend beneath a road bridge at a seemingly impossible speed.

An Associated Press analysis of the video indicated the train hit the bend going twice the speed limit or more.

Using the time stamp of the video and the estimated distance between two pylons, the AP calculated that the train was moving in a range of 89 to 119 mph. Another estimate calculated on the basis of the typical distance between railroad ties indicated its speed was between 96 and 112 mph).

The anonymously posted video footage, which the Spanish railway authority Adif said probably came from one of its cameras, shows the train carriages buckling and leaving the tracks soon into the turn.

Murray Hughes, consultant editor of Railway Gazette International, said a diesel-powered unit behind the lead locomotive appeared to derail first. The front engine quickly followed, violently tipping on to its right side as it crashed into a concrete wall and bulldozed along the ground.

In the background, the rear carriages could be seen starting to decouple and coming off the tracks. The picture went blank as the engine appeared to crash directly into the camera.

After impact, witnesses said, a fire engulfed passengers trapped in at least one carriage.

"I saw the train coming out of the bend at great speed and then there was a big noise," eyewitness Consuelo Domingues, who lives beside the train line, told The Associated Press. "Then everybody tried to get out of the train."

Other witnesses said nearby residents ran onto the tracks and worked to free survivors from the crumpled, flaming wreckage. Some were seen pounding rocks against windows, and one man wielded a pickaxe as survivors were pulled through shattered windows to safety.

The Interior Ministry ruled out terrorism as a cause.

While sections of the Spanish press pointed an accusatory finger at the train driver, government officials and railway experts cautioned that a fault in systems designed to keep trains at safe speeds could be to blame.

Jose Antonio Santamera, president of Spain's College of Civil Engineering, said one of the train's supposedly fail-safe mechanisms could have failed.

"The security system will detect any fault of the driver, (for example) if he has suffered a blackout and does not answer calls, and then starts the train's security systems. So I almost rule out human error," Santamera said.

He said the crash happened at a point where one speed-regulating system gave way to another, suggesting a possible failure at the handover point.

Train company Renfe identified the driver, Francisco Jose Garzon Amo, as a 30-year employee of the state rail company who became an assistant driver in 2000 and a fully qualified driver in 2003. The company said Amo took control of the train from a second driver about 65 miles south of Santiago de Compostela.

Renfe's president, Julio Gomez-Pomar Rodriguez, told Spain's Cadena Cope radio network that the driver had worked on that route for more than one year.

It was Spain's deadliest train accident since 1972, when a train collided with a stationary carriage in southwest Spain, killing 86 people and injuring 112.

"July 24 will no longer be the eve of a day of celebration, but rather one commemorating one of the saddest days in the history of Galicia," said Alberto Nunez Feijoo, regional president of Galicia. Santiago de Compostela is its capital.

Passenger Sergio Prego told Cadena Ser the train "traveled very fast" just before it derailed and the cars flipped upside down, on their sides and into the air.

"I've been very lucky because I'm one of the few able to walk out," Prego said.

The Alvia 730 series train started from Madrid and was scheduled to end its journey at El Ferrol, about 60 miles north of Santiago de Compostela. Alvia operates high-speed services, but they do not go as fast as Spain's fastest bullet trains, called AVEs.

The maximum Alvia speed is 155 mph on tracks made especially for the AVEs, and they travel at a maximum speed of 137 mph on normal-gauge rails.

Other Spanish train calamities include a 1944 accident involving three trains that crashed in a tunnel. That disaster produced wildly disputed death tolls ranging from the government's official count of 78 to researchers' later estimated tolls exceeding 500.

In 2006, 43 people died when a subway train crashed because of excessive speed in the southern city of Valencia.