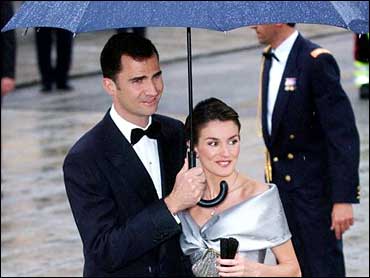 Town hall declined to disclose the cost of Spain's social event of the year, but the newspaper El Pais put it at approximately $24 million.

The ceremony will be the first royal wedding in Madrid in nearly a century, and the first to be held in the main nave of Almudena Cathedral. Normally, weddings there are held in an underground chapel that also is a crypt. King Juan Carlos and his Greek-born wife, Queen Sofia, were married in Athens.

The nearby Royal Palace will host a banquet for 1,400 guests from around the world - including about 30 heads of state or government, and members of royal houses from as distant as Japan. Former South African President Nelson Mandela was among the guests arriving Friday.

The tight security measures involve some 20,000 police, F-18 fighter jets and two AWACS surveillance planes from NATO to patrol the skies. The second AWACS plane arrived at a base in northeast Spain.

Police in blue jumpsuits walked the broad plaza between the cathedral and palace with bomb-sniffing dogs, while other officers rode on horseback. Several streets were blocked off.

The security measures come in the wake of March 11 train bombings that killed 191 people and wounded more than 2,000.

"It is urgent for Madrid to smile again," said Tomas Alias, an architect involved in the city's multimillion-dollar wedding decorations.

The newspaper El Mundo said in an editorial that Madrid "is news again, but for a much more pleasant reason."

The prince, 36, met television anchorwoman Letizia Ortiz at a dinner party in late 2002, and they started dating in earnest the following spring. After a secretive courtship, they announced their engagement in November.

The wedding is rich in novelty. Ortiz, 31, will be the first commoner in centuries of Spanish royal history to be in line to be queen.

As part of their frenzied final week as singles, the prince and Ortiz observed an old Spanish tradition: they sent dozens of eggs to an order of nuns named for a saint associated with good weather.

However, forecasters say there is an 80 percent chance of rain Saturday.