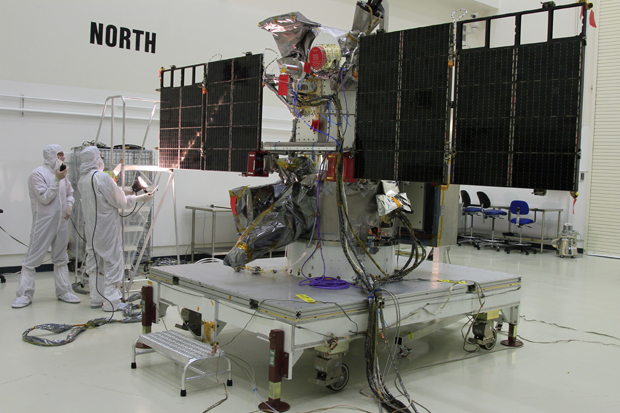 Launch of a satellite dreamed up 17 years ago by Al Gore to provide continuous views of Earth via the internet and now repurposed to serve as a space weather station will have to wait at least until Tuesday to get into space, after problems with an Air Force radar derailed a launch attempt Sunday.

Perched atop a SpaceX Falcon 9 rocket, the Deep Space Climate Observatory, or DSCOVR, spacecraft had been scheduled for liftoff from the Cape Canaveral Air Force Station at 6:10 p.m. EST Sunday. But just two minutes and 27 seconds before liftoff, the countdown was aborted when engineers were unable to fix the radar problem in time.

SpaceX also had problems with a video transmitter on the first stage of the Falcon 9, but that gear was not required for launch. In any case, the scrub was a disappointment for the launch team and, presumably, to Gore, who was on hand for the flight.

SpaceX has now rescheduled the launch for 6:05 p.m. Tuesday, assuming the technical issues can be resolved in time and the weather cooperates. Weather was not favorable to try for a launch on Monday.

The 1,256-pound solar-powered DSCOVR satellite is bound for a point 930,000 miles toward the sun where the gravity of Earth and its star are in a sort of balance, allowing spacecraft to remain on station with minimal use of maneuvering fuel. Because of the deep space trajectory, the mission does not have the luxury of a launch window and must take off on time.

The primary goal of the repurposed $340 million DSCOVR mission is to replace an aging NASA satellite, providing space weather data to the National Oceanic and Atmospheric Administration.

"DSCOVR will provide the observations necessary to help us deliver warnings and alerts to industries affected by space weather so they can take action to protect infrastructure and be more resilient in the face of severe events," said Tom Berger, director of NOAA's Space Weather Prediction Center in Boulder, Colorado.

Assuming a problem-free launch, it will take DSCOVR about three-and-a-half months to reach L1. NASA then will spent about 40 days testing and checking out the satellite's instruments and subsystems before turning the spacecraft over to NOAA this summer for routine operations.

While launching DSCOVR is the primary goal of the mission, SpaceX once again will attempt to guide the rocket's first stage to a powered landing on a barge stationed some 370 miles east-northeast of Jacksonville, Fla. SpaceX founder and chief designer Elon Musk hopes to eventually be able to recover, refurbish and relaunch rocket stages to lower the cost of access to space.

During a landing attempt in January, a Falcon 9 first stage made it back to the landing barge but ran out of hydraulic fluid needed to operate stabilizing fins during the descent to Earth. The booster crashed onto the deck at an angle and exploded.

This time around, SpaceX engineers say hydraulic fluid won't be a problem but the trajectory is more challenging and the rocket will enter the atmosphere at a higher velocity than usual, using only one pre-entry rocket firing instead of two.

"Personally, I feel this last time was really an enormous accomplishment on the way to refurbishment and reusability of vehicles," he said Saturday. "I don't see this as a failure at all, to me it's just a development step. Another improvement is coming this time. We have plenty of opportunities over the next year to try this out and perfect the landing part."

DSCOVR began its life in 1998 when then Vice President Gore suggested a modest satellite that could capture transformative -- and scientifically valuable -- images of Earth that could be streamed in realtime on the Internet. The mission, originally called Triana, was cancelled by the Bush administration and the spacecraft, dubbed "Goresat" by critics, was put in storage in 2001 at NASA's Goddard Space Flight Center.

NOAA then stepped in, paying NASA to take the spacecraft out of storage in 2008 for tests and refurbishment, putting the emphasis on space weather and relegating Earth science to a secondary role. The Air Force arranged for the Falcon 9 rocket and all three agencies roughly split the cost of the mission.

The goal was to make sure NOAA could monitor and provide advance warning of potentially serious solar storms after NASA's long-lived Advanced Composition Explorer is eventually retired.

Space weather in this context means the solar wind, the supersonic stream of electrically charged particles blasted away from the sun, and titanic storms on the surface of the sun that can hurl huge quantities of energetic particles -- coronal mass ejections, or CMEs -- toward Earth.

"Impacts from space weather are very wide ranging with potentially severe consequences," he said. "Many public infrastructure systems such as satellites, GPS systems, commercial aviation and the electric power industry are vulnerable to space weather, particularly the severe events that can sometimes occur."

"DSCOVR will ... serve as our tsunami buoy in space, if you will, giving forecasters up to an hour's warning of the huge magnetic eruptions on the sun that occasionally occur called coronal mass ejections," Berger said.

"CMEs are the cause of the largest geomagnetic storms at Earth, some of which can severely disrupt our technological society causing loss of communications with aircraft, particularly those flying over the poles, damage satellites in orbit and even damage power grid equipment on the ground," Berger said. "So with the launch of DSCOVR, NOAA and (the space weather prediction center) will be better prepared for this critical mission."

EPIC will photograph Earth's sunlit hemisphere every two hours. The images will be downlinked and posted on the internet a day or so later. Gore, writing in Scientific American, said the satellite will provide solid science, along with a bit of inspiration.

"DSCOVR will ... have the ability to inspire new ways of thinking about the true nature of the human condition, by showing us new images everyday that give every person on Earth the ability to see his or her home city or village in the context of the planetary whole, reminding us of our obligation to take good care of what Buckminster Fuller described so long ago as 'Spaceship Earth,'" Gore wrote.

He said DSCOVR's camera will "recapture the wonderment, excitement and curiosity" inspired by a spectacular photo of Earth captured by the crew of Apollo 17.

Steven Clarke, director of NASA's Joint Agency Satellite Division, said the EPIC camera "might not be cutting edge like you know today, but the electronics are good, the optics are good. ... I don't consider it old technology."

Either way, Gore said he was pleased the long-delayed mission was finally getting its day in the sun.

"We will soon see fresh, beautiful new images of our planet every day," he wrote. "Indeed, DSCOVR stands as a testament to the same ideals that originally brought humanity to space: resiliency, ingenuity and the strength of the human spirit. But DSCOVR will also provide a stark reminder of our physical limits. This satellite and its instruments will give humanity a new vantage point from which to view the boundaries and vulnerability of planet Earth."