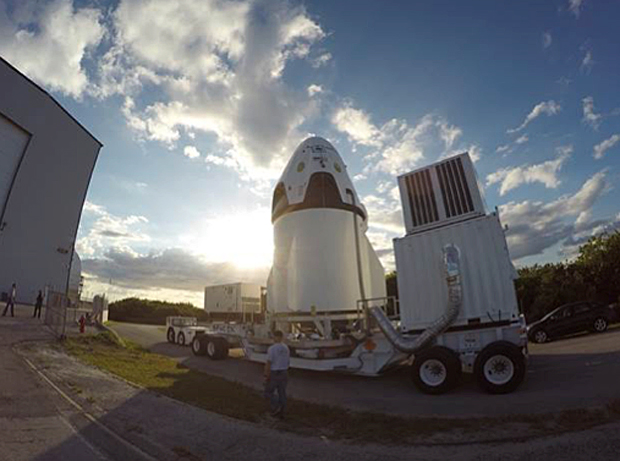 SpaceX is readying an unmanned Dragon capsule for a simulated launch pad abort Wednesday, a short, high-speed flight to demonstrate an innovative rocket-powered escape system designed to quickly pull a crew to safety in the event of an impending booster failure before or just after liftoff.

Accelerating from zero to 100 mph -- straight up -- in about one second, the capsule's eight SuperDraco engines will fire for just five seconds or so before running out of propellant, boosting the spacecraft and an attached trunk section to an altitude of about 4,500 feet.

At that point, the capsule and trunk will separate, drogue and then main parachutes will unfurl and if all goes well, the capsule will settle to a splashdown in the Atlantic Ocean half a mile off the coast of Cape Canaveral where recovery crews will be standing by to haul it aboard a barge.

Flight duration: about one minute and 47 seconds.

"This is a test flight, so there are a lot of uncertainties," former shuttle astronaut Garrett Reisman, SpaceX director of crew operations, said last week. "This is the first time we're ever going to have Dragon fly by itself in the atmosphere."

The pad abort test is "going to be amazing," he said. "It doesn't last long. The boost phase is only a few seconds, and it's pulling almost 5 Gs when it's coming off the pad, so it's going to get out of here in a hurry. My advice to you, if you go outside to watch it, is don't blink."

For Wednesday's test, simulating an on-the-launch-pad emergency, the Falcon 9 booster that normally would propel the Dragon to space was not needed. Instead, the trunk section and the heavily instrumented spacecraft -- carrying an instrumented dummy serving as its "crew" -- were mounted on a custom fixture at launch complex 40 at the Cape Canaveral Air Force Station.

SpaceX has a $2.6 billion contract with NASA to develop a piloted version of its Dragon cargo ship to ferry astronauts to and from the International Space Station starting in 2017. Boeing holds a similar contract, valued at $4.2 billion, to build its CST-100 ferry craft. A key element of the design of both vehicles is the escape system, designed to quickly propel a crew to safety at any point from launch to orbit.

"We're proud to have a launch escape system in case the Falcon 9 is having a bad day, the Dragon crew can get to safety," Reisman said. "It's a capability we had on Gemini and Apollo, and we have it on the Soyuz, but we did not enjoy that on the shuttle. We're bringing that back to try and make sure our crews are super safe."

NASA's single-seat Mercury capsules and Apollo moonships were equipped with solid-fuel rockets designed to pull the spacecraft away from an impending disaster for a parachute descent to Earth. The agency's two-seat Gemini capsules featured ejection seats.

Russian Soyuz spacecraft used to ferry cosmonauts and astronauts to the International Space Station also rely on escape rockets and other systems to pull the capsule safely away at any point during the climb to space.

In the wake of the 1986 Challenger disaster, NASA developed a system that would allow shuttle crew members to bail out of the shuttle's side hatch, one at a time, in an emergency. But the system could only work if the orbiter was in controlled, level flight. There were no survivable escape options in the event of a booster failure in the first two minutes of flight, like the one that doomed Challenger.

But NASA's next generation of piloted spacecraft -- the Orion deep space exploration ship and the commercial space station ferry craft being built by Boeing and SpaceX -- once again will feature escape rockets, along with state-of-the-art navigation systems and computer control allowing a crew to get away from a failing booster at any point from launch pad to orbit.

The SpaceX escape system relies on eight company-built SuperDraco engines that together generate 120,000 pounds of thrust within one second of ignition. In just two seconds, the SuperDracos will boost the Dragon test article 328 feet, tilting the trajectory slightly to ensure an ocean splashdown. The engines will shut down about five seconds after liftoff and the spacecraft will coast upward to an altitude of about 4,500 feet.

At that point, about 21 seconds after launch, the trunk will be jettisoned and the Dragon will flip around so its heat shield faces the ocean. A few seconds after that, two small drogue parachutes will deploy to stabilize the capsule, followed by deployment of three main parachutes. Splashdown is expected one minute and 47 seconds after liftoff.

"The whole intent is to get away from trouble fast, and that's what you're going to see," Reisman said.

SpaceX plans a second abort test later this year, using the same capsule, to make sure the escape system can operate when the aerodynamic pressure acting on the capsule is at maximum during the climb out of the dense lower atmosphere.

"There are two points in the trajectory that are the hardest for that system to work," Reisman said. "The first is when it's sitting still on the pad, and we call that a pad abort. When you have zero altitude and zero airspeed, you've got to get high enough and far enough downrange so you can get the parachutes out, get to the water, and get far enough away from any bad thing that might be happening over here (on the pad)."

"The other case is when you get to the area of maximum aerodynamic pressure. That's when you're flying along, and you're getting faster and faster. The drag is increasing as the aerodynamic forces build up, and eventually they start going down because you're going out of the atmosphere. But there's one point where it hits the maximum. Right there, you have to also get away when the dynamics of separation are the most difficult."

The in-flight abort test will demonstrate the spacecraft has "enough thrust in the engines to get away and enough controllability in the guidance, navigation and control system to get away in a stable manner, even at the most challenging point," Reisman said.

"We're going to stick the same (capsule) on top of a Falcon 9 and launch it, and when we get to that point of maximum aerodynamic pressure, we're going to punch out and make sure she can get away then. ... When we test those two cases, we're confident it's going to be OK throughout the entire trajectory."

SpaceX is in the process of modifying shuttle launch pad 39A at the Kennedy Space Center for use by Dragon crew capsules and the company's heavy-lift Falcon 9 rocket. A large hangar is under construction at the base of the pad where the rockets will be assembled before they are erected atop the pad for launch.

"We're modifying the crown at the top of the launch pad to accommodate the Falcon," Reisman said. "We're upgrading all the ground support equipment to be able to handle our propellants and we're adding a gantry arm. We're going to use the existing (shuttle) tower and the existing elevator, but we're adding a gantry arm at the proper height so the crew can get into Falcon 9."

The gantry arm will feature a "white room" where technicians can help crews into and out of the capsule. The same slidewire-basket launch pad escape system and bunker available to shuttle crews also will be available.

"We plan to have this launch pad operational later this year and start flying," Reisman said. "We have a very aggressive and exciting year ahead of us."