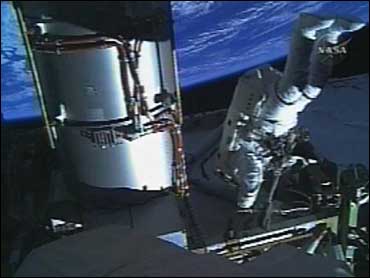 Steven Swanson and Richard Arnold II struggled with some cable connections, but managed to hook everything up.

"It wasn't quite as smooth as we had hoped, but those guys did a great job," astronaut Joseph Acaba told Mission Control.

The next milestone will be Friday, when the folded-up solar wings are unfurled.

Manpower was needed inside and out to attach the $300 million segment to the space station. Swanson and Arnold helped their colleagues inside the shuttle-space station complex cautiously move the 31,000-pound, 45-foot-long girder into position with a robotic arm.

"Keep coming," one of the spacewalkers said. "It really looks good to me."

The actual attachment occurred an hour into the spacewalk, and the hookups were completed two hours later.

Discovery delivered the new wings earlier this week. It's the final of solar wings to be installed at the 10-year-old space station and will bring it to full power. It's also the last major American-made piece of the space station.

This is the 121st spacewalk devoted to station assembly and maintenance since construction began in 1998, the second so far this year and the first of three planned for Discovery's crew, reports CBS News space analyst Bill Harwood.

Measuring 45.4 feet long and 16.3 feet wide in its stowed configuration, the 31,060-pound S6 is the fourth and final set of solar arrays to be attached to the lab complex and the final heavyweight payload scheduled for launch aboard a shuttle, Harwood reports.

Before going back inside, Swanson and Arnold must release and remove the locks and cinches holding down the solar wings. That will allow the 115-foot wings to be extended on Friday, an even more nerve-racking procedure than the one Thursday. The last time astronauts tried to unfurl a solar wing in 2007, it snagged on a guide wire and ripped. Emergency repairs were required.

Six solar wings already are in place at the space station. The new ones will bring the number to eight, with four wings on each side.

The space station "is almost symmetric, looking forward to that becoming permanent today," Mission Control said in a wake-up message to the astronauts.

NASA needs the extra electrical power that the new wings will provide in order to boost the amount of research being conducted at the space station. The pace of science work will pick up once the number of station crew members doubles to six; that's supposed to happen in two more months.

"Give us some more power," the space station's skipper, Mike Fincke, told the spacewalkers as they floated out Thursday afternoon.

Swanson was making the third spacewalk of his career. Arnold, a former schoolteacher, was on his first.

Thursday's spacewalk 220 miles up was the first of three planned for Discovery's space station visit. There should have been four spacewalks, but delays in launching the shuttle cut the mission short.

Discovery needs to leave the space station Wednesday so that a Russian spacecraft can bring up a fresh crew.