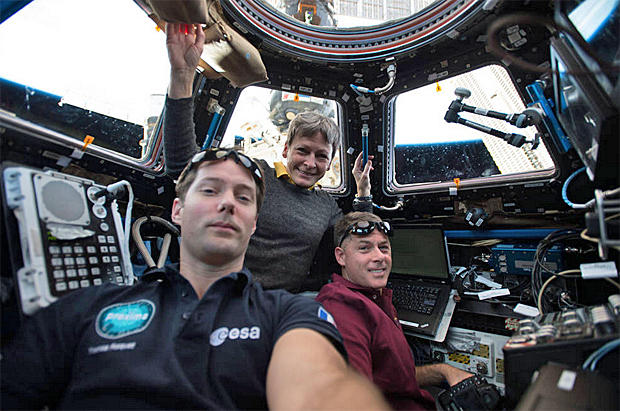 Two astronauts plan to venture outside the International Space Station Friday, taking over from earlier robotic arm operations to help replace a set of batteries used to store power from one of the lab’s four sets of solar arrays.

The goal is to replace 12 aging nickel-hydrogen batteries with six smaller but more powerful lithium-ion power packs that were delivered to the International Space Station last month attached to a pallet in the cargo bay of a Japanese HTV cargo ship.

Working over the New Year holiday weekend, flight controllers at the Johnson Space Center in Houston remotely operated the station’s robot arm to install three lithium-ion batteries in the integrated electronics assembly at the base of the starboard 4, or S4, set of solar arrays.

They also removed four of the older batteries from the IEA and moved three of them to the HTV pallet for eventual disposal. The fourth was temporarily mounted on a storage fixture at the base of the arm’s hand-like multi-appendage special purpose dexterous manipulator, or SPDM (pronounced SPID-um).

Kimbrough and Whitson plan to begin their excursion at 7:05 a.m. EST (GMT-5) Friday when they switch their spacesuits to battery power inside the station’s Quest airlock.

This will be the 196th spacewalk devoted to station assembly and maintenance since construction began in 1998, the third for Kimbrough and the seventh for Whitson, who has nearly 40 hours of EVA time to her credit during three previous space missions. At 56, Whitson is the oldest female space flier and the second most experienced female spacewalker after NASA’s Sunita Williams.

“All our power here on board the space station is collected by solar arrays,” Whitson said in a NASA interview. “But of course, as we’re going around the Earth 16 times in a day, half of that time the Earth is between us and the sun and so we have to have a way to store our power. Our batteries have been there in place many, many years and it’s time for us to replace (them) with new batteries outside.”

Station assembly began in 1998 and the original-equipment batteries are losing strength. Over the next few years, all 48 of the nickel-hydrogen batteries will be replaced with 24 smaller, more efficient lithium-ion batteries that will keep the station in good health through 2024, its currently planned end of life.

The pallet carrying the first six Li-Ion batteries, along with six so-called adapter plates, was extracted from the HTV by the station’s robot arm last month and mounted near the S4 set of arrays, which collect power for electrical channels 1A and 3A. The S4 arrays, and their batteries, were launched in June 2007.

On Friday, Kimbrough and Whitson plan to finish up the battery swap outs for channel 3A. The six original NiH2 batteries in that channel were wired in series in two-battery pairs. One Li-Ion battery and one adapter plate will replace each NiH2 battery pair, using jumper cables between the new batteries and adapter plates to maintain the serial circuit.

“We’re really looking forward to these EVAs,” Whitson said. “We’re going to use robotics to remove the old batteries and then we’ll install new batteries and adapter plates. Our new lithium-ion batteries actually are so much more efficient that we’re (installing) one battery in the volume that used to take up in two.”

Along with carrying the six new batteries to the station, the pallet will be used to carry nine of the 12 older batteries away from the station. They will burn up, along with the HTV, when the cargo ship re-enters the atmosphere after departing the station at the end of January.

Three of the older batteries will be left in storage aboard the lab, mounted atop three of the adapter plates.

After setting up their safety tethers, Kimbrough and Whitson will make their way to the S4 arrays and the HTV pallet on the right side of the station’s long power and cooling truss.

“It’s always fun to go outside,” Whitson said. “We have a great view out the cupola windows, but a lot of our time is spent focusing on the research we’re doing inside here. And so having an opportunity to go outside is very special. I’ve done a number of spacewalks out near the starboard end of the solar arrays, so it’s like going to visit an old friend out there.”

Kimbrough and Whitson first will remove two adapter plates from the HTV pallet and mount the first in the S4 integrated electronics assembly, or IEA. Then an old NiH2 battery will be removed from its place in the IEA and mounted atop the adapter plate for long-term storage. The spacewalkers will repeat that process with the second adapter plate and a second NiH2 battery.

Their final major tasks are to mount a third adapter plate in the IEA and release a bolt holding another NiH2 battery in place. Whitson and Kimbrough then will make their way back to the airlock. At that point, the channel 3A battery upgrade will be complete.

Arm operators in Houston will focus on channel 1A next week, installing the final three Li-Ion batteries. Three NiH2 batteries in the 1A section of the IEA will be moved to the HTV pallet and two more will be temporarily held by robot arm appendages.

Kimbrough and Pesquet, a French astronaut making his first spacewalk, will carry out another planned 6.5-hour spacewalk next Friday to move three adapter plates into position on the 1A side of the IEA and to mount a third and final NiH2 battery on one of those plates. If time is available, they will carry out a variety of “get-ahead” tasks before calling it a day.

With the second EVA complete, robot arm operators in Houston will finish the battery work the following week, moving the three NiH2 batteries attached to robot arm appendages to the HTV pallet for disposal. The pallet then will be moved back to the Japanese cargo ship, which is scheduled to depart the station Jan. 27.

“If we didn’t have the robotics helping us out, it would be six spacewalks for Shane and I to do all the activity,” Whitson told CBS News in an interview earlier this week. “And the reason we have to have the two is because unfortunately, the adapter plates don’t have an interface for the robotic arm. Lucky for Shane and (me)!”