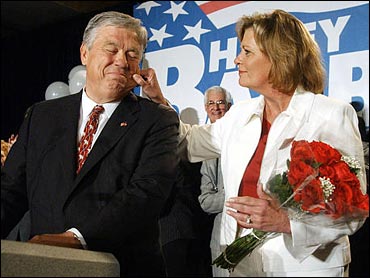 With a presidential campaign only months away, Republicans picked up two governorships in the South, ousting Mississippi's Democratic incumbent and seizing Kentucky's top job for the first time in 32 years.

President Bush loomed large in both campaigns, and he's sure to claim a boost from the victories. He stumped for both GOP candidates, while Democrats in Kentucky tied their opponent to Bush's economic policies and Musgrove dismissed his challenger as a "Washington insider."

Barbour, a former head of the Republican National Committee who said his connections would help Mississippi, told a crowd of supporters: "Get ready to accentuate the positive."

"My job is to be governor for all Mississippians, regardless of whether they voted for me or not, regardless of what part of the state they're from," said Barbour, who appeared to fight back tears as he claimed victory after a hard-fought race.

Nearly 100,000 more votes were cast in Tuesday's election than in the governor's race four years ago, the most ever in a race for the state's top elected post. The previous record was set in 1995.

But in the Kentucky and Mississippi races, campaigns tried out strategies that could play out in next year's presidential race. And Republicans were already crowing.

"The Democrat strategy was negative attacks and tying Ernie Fletcher to President Bush and making this race a referendum on the president's economic policies," Republican National Chairman Ed Gillespie said. "The Democrats had their referendum and got their answer."

Mississippi Democrats criticized Barbour for his connections and years spent in Washington as President Bush, Vice President Dick Cheney and other top GOP officials came to campaign for him - and as Musgrove distanced himself from national Democrats.

In Kentucky, party activists argued that a vote for Chandler would tell the White House its economic policy is a failure.

Republicans went into the election holding seven of 11 governorships in the South, having turned out Democratic chief executives in Alabama, South Carolina and Georgia last year. With Arnold Schwarzenegger's victory in California last month and victories for Fletcher and Barbour, Republicans will hold 29 governorships nationwide.

One more governor will be elected this year, also in the South. The race to replace term-limited GOP Gov. Mike Foster goes before Louisiana voters on Nov. 15. Democratic Lt. Gov. Kathleen Blanco will face Republican Bobby Jindal, a former health policy adviser in the Bush administration.

Racial issues flared in both states - Musgrove ran ads reminding voters of a divisive and unsuccessful 2001 referendum to change the state flag to remove a Confederate emblem, and Election Day brought claims of intimidation at largely black precincts. Kentucky Democrats complained about a GOP plan to put observers at black precincts, but no problems materialized.