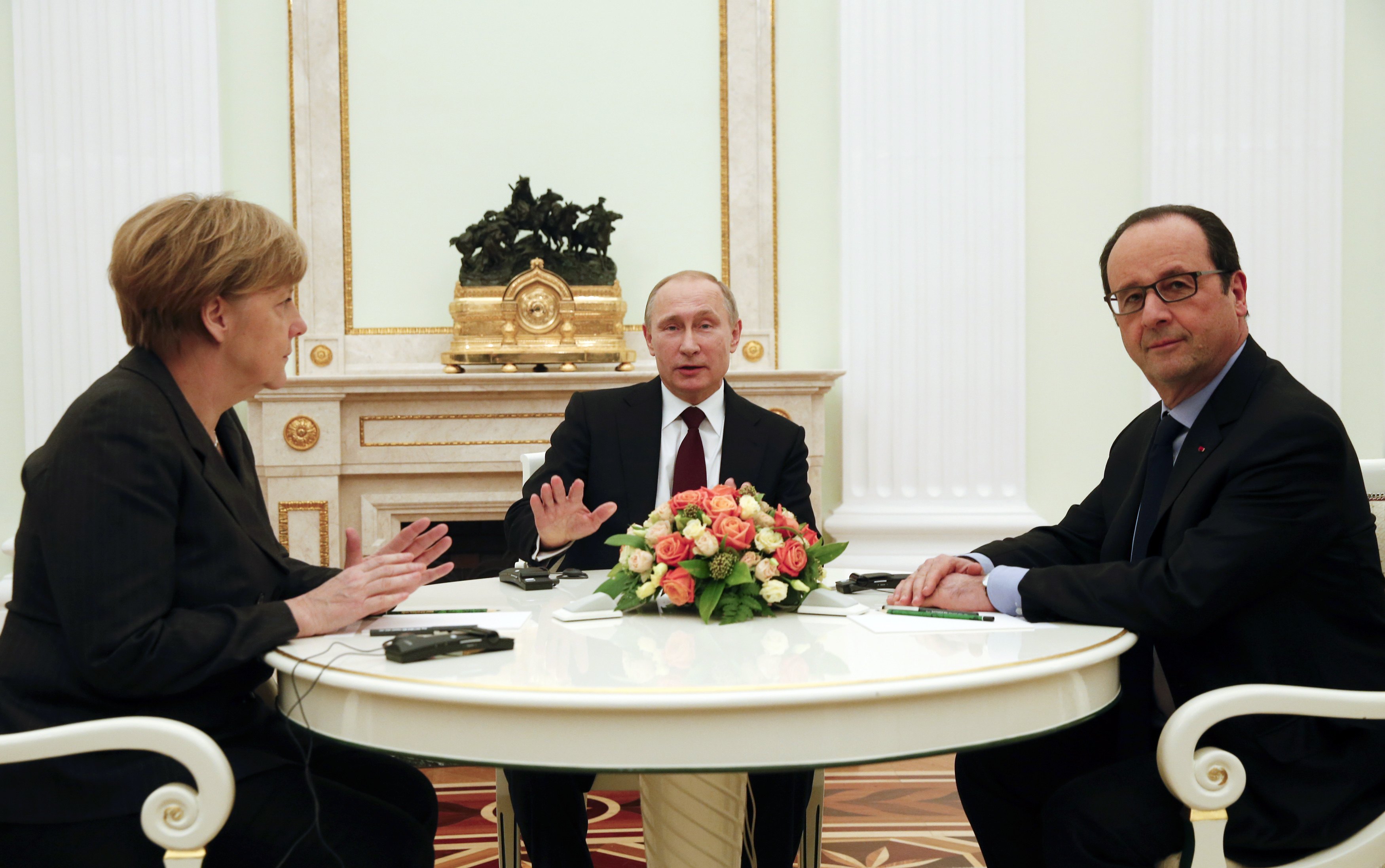 MOSCOW -- Talks among the leaders of Russia, France and Germany on a peace initiative for Ukraine were described as "substantive and constructive," according to Reuters.

The news agency spoke with a source within French President Francois Hollande's office after the negotiations ended early Saturday with an announcement that Russian President Vladimir Putin and his Ukrainian counterpart would discuss a proposal to end the fighting in a four-way telephone call this weekend.

The planned discussions Sunday involving Putin, Ukrainian President Petro Poroshenko and the leaders of France and Germany came amid urgent shuttle diplomacy to halt the recent intensification of fighting in Ukraine and suggested that a cease-fire proposal was still on the table, although there was no firm announcement of progress.

Even getting the arms to fall silent would be a significant diplomatic breakthrough. The resurgent fighting has fueled fears the conflict is threatening Europe's overall security and has prompted the U.S. to consider giving lethal weapons to Ukraine, an option opposed by European nations.

Hollande and German Chancellor Angela Merkel came to Moscow on Friday on the second leg of a hastily arranged trip to try to halt the spiraling conflict. They had met with Ukraine's president the previous day in Kiev.

The contents of their proposal have not been revealed, but it is aimed at salvaging a peace plan agreed to in September in Minsk, Belarus.

"Work is currently under way on drafting the text of a possible joint document on the implementation of the Minsk agreement, which would include the proposals made by the president of Ukraine and President Putin," Peskov said after the talks in the Kremlin ended.

He said Merkel, Putin, Hollande and Poroshenko would hold discussions by telephone on Sunday. A similar four-party conversation took place in mid-December, before the recent upsurge in fighting.

The urgent diplomacy comes as Western anxiety over the conflict grows and sanctions bite down ever harder on Russia's economy. More than 5,300 people have been killed since fighting began in April, according to a U.N. tally, and the bloodshed has markedly increased over the past two weeks.

In Washington, the meeting was viewed with skepticism.

"I'm not going to say it's a positive sign that they're listening," State Department spokeswoman Marie Harf said of Russia. "They've been listening. They just haven't been acting."

The United States and other Western countries contend Russia has supplied troops and equipment to the separatists in eastern Ukraine who have been fighting Ukrainian government forces since April. Russia denies the claims.

A cease-fire deal was reached in September, but both sides have repeatedly violated it and the fighting has risen sharply in the past two weeks.

"Everyone is aware that the first step must be the cease-fire, but that it cannot suffice. We must seek a global solution," Hollande told journalists in Paris before heading to Moscow.

In Berlin, Merkel said she and Hollande would use "all our power with direct visits to Kiev and to Moscow today to stop the bloodshed as soon as possible and to fill the Minsk agreement with life."

"We are convinced that there's no military solution to this conflict," Merkel added. "But we also know that it's completely open whether we will manage to achieve a cease-fire with these talks."

She rejected reports that she and Hollande were prepared to offer more territory to the Ukraine separatists, saying, "I will never deal with territorial questions over another country."

Putin "continues to call for new peace plans as his troops roll through the Ukrainian countryside and he absolutely ignores every agreement that his country has signed in the past and that he has signed," Biden said.

Biden insisted the 28-nation European Union and the United States needed to stand together and support the government of Ukraine with financial and political aid.

Biden was to join U.S. Secretary of State John Kerry, Poroshenko, Merkel, Russian Foreign Minister Sergey Lavrov and other top world leaders for a three-day security conference in Munich that is expected to be dominated by the conflict in Ukraine.

"All sides know that fighting over every square meter won't help anyone. What's needed now is calm so there can be negotiations," Ischinger told German public broadcaster ZDF.

Speaking to The Associated Press on the sidelines of the Munich Security Conference, NATO Secretary-General Jens Stoltenberg described the current situation in Ukraine as "critical," and said every effort must be made to support the diplomatic initiative undertaken by Merkel and Hollande.

Noting that the previous cease-fire agreement "was undermined and violated by the separatists," he said observers from the Organization for Security and Cooperation in Europe must be be allowed access to monitor the implementation of any new agreement.

Meanwhile, on the ground in eastern Ukraine, the rebels and the Ukrainian authorities briefly halted hostilities Friday to evacuate civilians from Debaltseve, a besieged key railway hub between the two main rebel-controlled cities of Donetsk and Luhansk.

Dozens of buses drove in from both rebel-held and government territory to carry away residents who had been trapped in the crossfire without power, heat or running water for two weeks.

Authorities expected to evacuate about 1,000 civilians from the town Friday, offering them the choice of going to either rebel- or government-controlled territory. One rebel spokeswoman, however, said only about 50 people left on the rebels' 20-odd buses.

Several residents didn't know the evacuation was taking place until the buses arrived and could not bring family members to the collection point in time. Many looked exhausted. Bags of rice, noodles and canned goods were handed out to those staying in the town, and arguments erupted in the food line. One woman noticed that some of the canned goods had expired years ago.

To the west, artillery duels between the rebels and government forces rumbled through Donetsk, where one disenchanted resident had little hope for the new European peace initiative.

"I don't expect anything. I'm so tired of this. It has been going on for so long," said retiree Esfira Papunova.