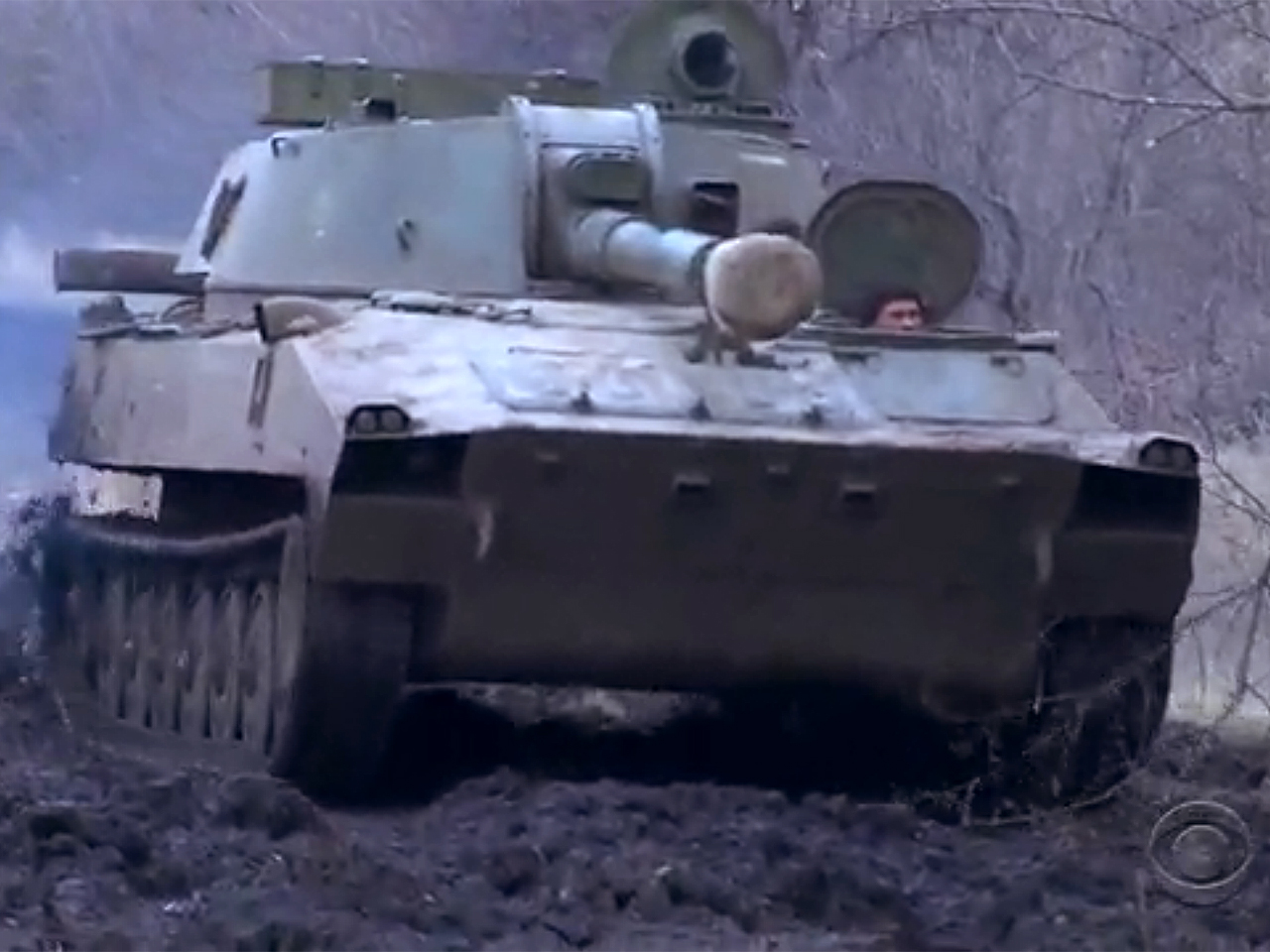 VUHLEHIRSK, Ukraine -- The pro-Russia rebels in Ukraine reached agreement with government forces on a humanitarian corridor to evacuate civilians from the epicenter of fighting on Friday as German and French leaders brought their peace plan to Moscow.

German Chancellor Angela Merkel and French President Francois Hollande were set to hold talks with Russian President Vladimir Putin in the Kremlin a day after discussing their proposals with Ukrainian President Petro Poroshenko.

CBS News correspondent Elizabeth Palmer says few details of the European leaders' proposal have been made public -- but it contains the outlines of a ceasefire, and a roadmap for a permanent political solution to the war which has now killed more than 5,000 people, most of them civilians.

"Everyone is aware that the first step must be the cease-fire, but that it cannot suffice. We must seek a global solution," Hollande told journalists in Paris before heading to the airport.

In Berlin, Merkel said she and Hollande would use "all our power with direct visits to Kiev and to Moscow today to stop the bloodshed as soon as possible and to fill the Minsk agreement with life."

"We are convinced that there's no military solution to this conflict," Merkel added. "But we also know that it's completely open whether we will manage to achieve a cease-fire with these talks."

She rejected reports that she and Hollande were prepared to offer more territory to the Ukraine separatists, saying "I will never deal with territorial questions over another country."

"(Putin) continues to call for new peace plans as his troops roll through the Ukrainian countryside and he absolutely ignores every agreement that his country has signed in the past and that he has signed," Biden said.

Biden insisted the 28-nation European Union and the United States needed to stand together and support the government of Ukraine with financial and political aid.

The diplomatic blitz comes amid fierce fighting which has prompted Washington to consider providing the beleaguered Ukrainian military with lethal weapons, in turn sparking European fears of even wider hostilities.

Palmer was allowed onto a Ukrainian military base near the frontline on Thursday, where soldiers told her they were short of some things, but not desperate for high-tech American weapons. The local commander told Palmer his men don't need any military help from the United States -- yet.

What Ukraine's state forces do need, said Palmer, is a completely revamped army; deep-rooted corruption and neglect means many of the soldiers got just a few weeks of basic training before they were flung into an intense rocket war.

Anton, a volunteer, told Palmer the men in his unit lack everything from clear orders, to adequate pay. His message was not for the U.S., but for Ukraine's president, to "stop lying to us."

As Palmer noted, the Ukrainian troops are facing Russia's vastly superior military, and there's very little chance they could ever hope to win this war. Thus the urgency for the diplomatic efforts.

Rebel leaders said they reached agreement with Ukrainian authorities to allow the evacuation of civilians from Debaltseve, a key railway hub that has become the focus of fighting in recent weeks because of its strategic location. It wasn't immediately clear where the evacuees would go.

The cease-fire around Debaltseve held Friday as a convoy of several dozen buses drove from nearby Vuhelhirsk toward Debaltsevo, where a shrinking population has been trapped in cross-fire and left without power, heating and running water for almost two weeks. Half-way to Debaltsevo, the convoy's movement was stopped by concrete blocks, apparently intended to block military vehicles from using the road.

The fighting in eastern Ukraine between Russia-backed separatist rebels and Ukrainian forces has intensified sharply over the past two weeks. Russia vehemently denies that it is backing the insurgency with troops and weapons, but U.S. Secretary of State John Kerry rejected that denial on Thursday's visit to Kiev.

France and Germany were hoping this time they can come up with a peace deal acceptable both to Ukraine and Russia. In a sign of the importance of the initiative, this will be Merkel's first trip to Moscow since Ukraine's conflict broke out last year.

More than 5,300 people have been killed since the separatist insurgency flared up in eastern Ukraine in April following Russia's annexation of Ukraine's Crimean Peninsula.