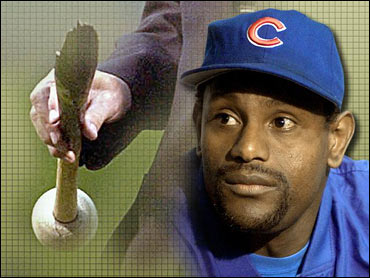 Sammy Sosa is done talking. All he can do now is wait.

Sosa on Tuesday appealed his eight-game suspension for using a corked bat. After speaking for about an hour with Bob DuPuy, baseball's chief operating officer, Sosa could only hope for the best.

A decision from major league baseball could come as soon as Wednesday.

"He admitted a mistake," said one fan in Baltimore, rooting for Sosa. "He should be allowed to play."

Cubs manager Dusty Baker was philosophical as he reflected on Sosa's situation, noting that he has apologized, and nobody's perfect.

At Camden Yards Tuesday, Sosa took time out to sign balls for fans who turned out for batting practice, and he made a short statement to the media without taking any questions. Cubs officials said then that Sosa would not speak with reporters again during the three-game series with the Orioles that concludes Thursday.

But after going 2-for-5 in the Cubs' 4-0 victory Tuesday night, Sosa relented and met with reporters on the condition that their questions be only about the game.

CBS News Correspondent Howard Arenstein reports there were a few boos, and some cheers, for Sosa during the game - and some fans threw cork at him from the bleachers.

"You know, I got to deal with that," Sosa said. "Someday I'm probably going to get tired of it."

Finally, the game was interrupted in the bottom of the eighth when a fan ran onto the outfield, removed his shirt and bowed to the slugger.

"That was another comedian, another idiot," Sosa said.

Much earlier in the day, Sosa met with DuPuy at the hotel where the Cubs are staying in Baltimore. After hearing the appeal, DuPuy paused briefly before getting into a cab.

Asked when a decision would be rendered, DuPuy replied, "As soon as I get to it."

Although Sosa started against the Orioles, the Cubs were unsure how much longer he would be with the team.

"You'd like to get it over with so we can put it behind us and move forward," Cubs second baseman Mark Grudzielanek said. "Obviously he's a vital part of our offense and our team, and we kind of want to know what's going to happen."

Sosa was suspended for eight games Friday by Bob Watson, baseball's vice president in charge of discipline, but the appeal allows him to play until a ruling is made.

He was ejected from a game against Tampa Bay on June 3 when his bat shattered after hitting a ground ball and umpires discovered cork halfway up the handle of the bat.

Tests on 76 bats taken from Sosa's locker found no foreign substances, and five of his bats at the Hall of Fame were also determined to be clean. Sosa claims he mistakenly grabbed a bat he uses for batting practice and used it in the game.

"It's been a tough week for me," he said Tuesday. "Once again, I want to apologize to everybody for the mistake that I made."

It's almost certain that Sosa will receive a suspension of some sort. The only question is how long.

"If they reduce it, it will only be a day or two," Grudzielanek said. "If not, let's go with it. Whatever needs to be done, let's get it done."

Chicago went 10-7 without Sosa last month while he was on the disabled list after undergoing surgery on his big toe. But they would love to have him in the lineup next week, when they follow a three-game interleague series against Toronto with a four-game road test against NL-Central foe Cincinnati.

"Let's get it over with now, so when we go play Cincinnati we'll have everybody that we need," Cubs reliever Mike Remlinger said.

Sosa has gone 66 at-bats since his last home run on May 1. But his value to Chicago transcends home runs; he's scored 32 runs and has 27 RBIs in 45 games.

"Obviously, Sammy is a huge part of this ballclub," first baseman Eric Karros said. "The sooner he can focus entirely on what happens on the field, the better off we'll be as well."