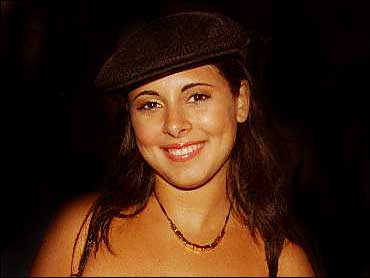 Fan's of HBO's "The Sopranos" are familiar with the daughter of Tony Soprano, Meadow Soprano, but most were not aware that the actress, Jamie-Lynn Sigler, had a eating disorder that almost cost her job.

Sigler, 21, visited The Early Show to discuss her new book, "Wise Girl: What I've Learned About Life, Love and Loss," that documents her problem and other obstacles she faced in life.

"I have something called exercise bulimia, which is where you rid of your calories by over exercising. I ended up starting at a routine which was, you know, 20 minutes in the morning and cutting back a little on my calories. And it snowballed into six or seven hours a day of exercise," said Sigler.

Sigler shot "The Sopranos" pilot, when she was at normal weight, the summer right before she started her junior year of high school. The series' first season, however, did not begin production until almost a year later.

In those intervening months, Sigler fell ill for the first time. Her ability to lose extreme amounts of weight was a revelation. "It was something you could have absolute full control over," Sigler said.

By the time Sigler arrived on the set to begin shooting the first season, she was already at the beginning of her recovery. But, to most cast members, she looked like a shadow of her former self.

"I remember [actor] Jim Gandolfini took my arm and wrapped his whole hand around it," Sigler said. "And he was like, 'Are you eating?'"

She told him she was fine.

"He could tell I didn't want to talk about it, so he left it alone," she said.

In the book, she reveals how the show's creator, David Chase even phoned her mother to ask about her health and she voices her concerns that she might be replaced.

Only during the second season did Sigler open up to her TV family. "It took me that whole year to come to terms," she said.

At that point, Sigler began speaking publicly about her illness on talk-shows and on-camera announcements.

When Gandolfini heard Sigler had gone public, he also reached out. Sigler recalled: "I remember, one day on the set, we were sitting on the couch and he said, 'You know, I think it's really great what you're doing, talking out about what you went through, because it's hard to put yourself out there to help other girls."

Discriminated Based On Skin Color?