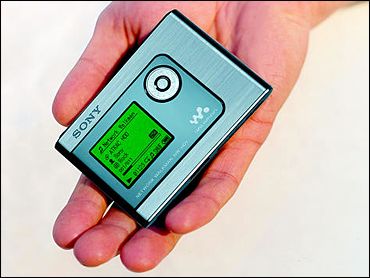 The iPod may finally have a serious competitor.

The company that brought us the Walkman is entering the hard disk music player arena now dominated by its trendsetting-rival Apple Computer Inc.

Sony Corp. plans to unveil Thursday its newest Walkman, a palm-sized, aluminum-encased player that can store up to 13,000 songs on its 20-gigabyte, 1.8-inch hard drive, and promises 30 hours of playback on a rechargeable battery.

Weighing 3.8 ounces, the new Sony NW-HD1 is smaller and lighter than the iPod's 15-, 20- and 40-gigabyte models, and just slightly larger than the 4-gigabyte iPod Mini. Sony claims the portable player is the smallest of its class.

The product will be available in mid-August for less than $400, Sony said.

Then the face-off will begin.

"I'd call it an iPod challenger, and one that will keep Apple on its toes," said Richard Doherty, an industry analyst with The Envisioneering Group.

Apple was not the first to introduce a high-capacity hard-disk portable music player, but its October 2001 launch of the iPod defined the market. The product's runaway success — with an estimated 3 million units sold — has since drawn other rivals, including Dell and Samsung.

Still, Apple leads with about a 60 percent share of the hard-disk drive player segment in the United States, and about 30 percent of all portable music players, according to Michael Goodman, an analyst at The Yankee Group market research firm.

Sony's sleek new Walkman is a highly-anticipated and belated entry but will likely be Apple's fiercest competitor yet, Doherty predicts.

"These are two aging entrepreneurs who are incredibly well-driven internally to exceed what they did just the month before," he said. "It'll be great to finally have these two in the same playing field."

Of course, portable music isn't new to Sony. It pioneered the category when it introduced the original Walkman in 1979.

But in the past few years, analysts say Sony lost some of its luster as it aggressively pushed mini disc-based music players, and sales — except for Japan — fell short of expectations.

"Apple's iPod came out, and it was so successful, it really forced Sony's hand," Goodman said.