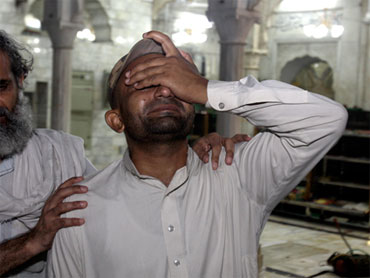 Two suicide bombings that killed 42 at a popular Sufi shrine in Pakistan's east stirred outrage in this terror-scarred nation Friday. Several people blamed the U.S. presence in Afghanistan for spurring the attacks, while some faulted a minority sect that itself was viciously targeted weeks ago.

The bombings of Lahore's Data Darbar shrine, the burial site of a famous Sufi saint, struck at the heart of the moderate Islam most Pakistanis practice. The assault wounded 180 people and again demonstrated the potency of militant groups that are linked to but operate far from the northwest tribal areas bordering Afghanistan.

Thousands of people had gathered late Thursday at the green-domed shrine when bombs went off minutes apart in separate sections. The blasts ripped concrete from the walls, twisted metal gates and left the white marble floor awash with blood. Worshippers scattered as white plumes of smoke blanketed the area, footage showed.

There was no claim of responsibility, but Islamist extremists consider Sufism to be heretical, and they have previously struck non-Sunni sects. Still, several Pakistanis interviewed Friday said the real root of the problem was the U.S. presence in Afghanistan and its missile strikes against militants in Pakistan's tribal regions.

"America is killing Muslims in Afghanistan and in our tribal areas, and militants are attacking Pakistan to express anger against the government for supporting America," said Zahid Umar, 25, who frequently visits the shrine.

Pakistanis are suffering because of American policies and aggression in the region, said Mohammed Asif, 34, who runs an auto workshop in Lahore. He and others said the attacks would end if the U.S. would pull out of Afghanistan.

Several others interviewed blamed the Ahmadis, a minority sect that has long faced discrimination in Pakistan. On May 28 in Lahore, gunmen and a suicide squad targeted two Ahmadi mosques, massacring at least 93 people.

"I think the Ahmadis were behind the attack" on the Sufi shrine, said Lahore resident Mohammad Amir, accusing the sect of seeking revenge. He offered no evidence to back up his claim.

Lahore, capital of Punjab province, is a key military, political and cultural hub. The city has witnessed several audacious attacks on diverse targets over the past two years, from crowded markets to Sri Lanka's cricket team.

The Pakistani government has been criticized for lacking the will to crack down on militants in Punjab, the country's most populous and most powerful region. Many of the militants are part of now-banned groups launched with government support in the 1980s and '90s to fight the Soviets in Afghanistan and pressure archenemy India.

Many of these groups have formed links with the Pakistani Taliban, which has recruited militants to carry out attacks in parts of Pakistan far from its sanctuary in the northwest.

During Thursday's attack, the first bomber detonated his explosives in an underground room where visitors sleep and wash themselves before praying. Minutes later, a second bomber struck upstairs in a large courtyard in front of the shrine as people tried to flee.

Police investigated a possible third blast, but concluded there were only two suicide bombers, whose heads were later found, said Khusro Pervez, a senior government official in Lahore. Overnight, the death toll rose to 42, he said. Police said 180 were wounded.

Pakistani officials condemned the bombings, using language they have frequently used to try to convince the population that the fight against militancy is not one they can ignore. The efforts have had limited success in a country where anti-Americanism is widespread and engaging conspiracy theories is a national pastime.

"Those who still pretend that we are not a nation at war are complicit in these deaths," said Farahnaz Ispahani, a spokeswoman for Pakistani President Asif Ali Zardari.

The attacks have fueled anger against Pakistan's weak police forces, who appear helpless to stop the killings. In the hours after Thursday's bombings, demonstrators gathered outside the shrine to protest the security lapse, only to be dispersed after police fired into the air and threw rocks at them.

"The intelligence agencies alerted us that terrorists could target prominent places, shrines and mosques in Lahore. They mentioned names of major places as a possible target, but no specific information was available to us," he said.

On Friday, militants attacked a security checkpoint on the outskirts of the northwestern city of Peshawar, killing three officers, said Safwat Ghayur, a regional commander of the Frontier Constabulary security force.

He said officers also returned fire and killed some of the attackers.