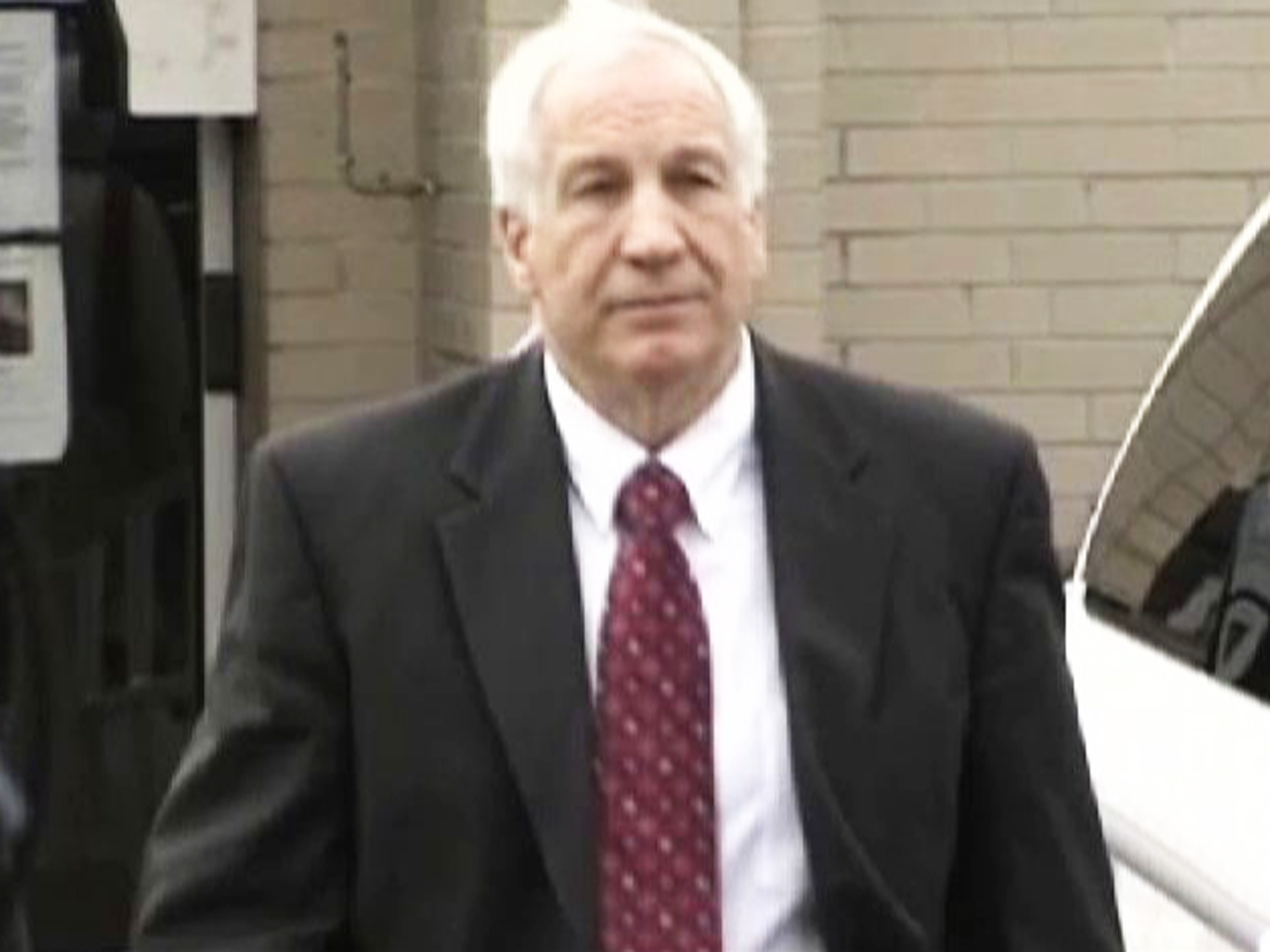 BELLEFONTE, Pennsylvania Former college football coach Jerry Sandusky and at least some of his victims plan to address the judge at his sentencing, a proceeding that may last less than two hours, lawyers said after a closed-door meeting to iron out logistics ahead of the Tuesday hearing.

Sandusky lawyer Joe Amendola said the former Penn State assistant coach will almost certainly speak to Judge John Cleland and assert his innocence before he is sentenced on 45 counts of child sexual abuse for molesting 10 boys over 15 years after meeting them through a charity for at-risk children.

"What I anticipate he'll say is he's innocent," Amendola said outside the courthouse Monday afternoon.

On Monday, Sandusky released a rare jailhouse recording in which he questioned his accusers' motives and repeatedly proclaimed to be innocent of and baffled by the charges against him. The three-minute statement aired on Penn State's student-run radio station.

The Sandusky case, which tarnished the reputation of one of the most storied college football programs in the U.S. and stunned a nation where college sports are revered, led to the firing of longtime head football coach Joe Paterno, who died from lung cancer in January.

Penn State football under Paterno was built on the premise that it did things the right way, that it was not a football factory where only wins and losses determined success. All major college football programs try to send that message, but Penn State built its brand on it.

Along with Sandusky, prosecutors last year arrested two Penn State administrators and charged them with lying to the grand jury that investigated Sandusky and failing to properly report suspected abuse. Tim Curley, the athletic director on leave, and Gary Schultz, a retired vice president for business and finance, deny the charges and await trial.

The case also led to the ouster of university President Graham Spanier, who remains a faculty member. Eight legal teams that represent at least 20 victims or other potential civil claimants have surfaced, and Penn State has indicated its desire to settle claims out of court.

Amendola said he did not expect any others to speak on Sandusky's behalf, although friends and family members -- including his wife, Dottie -- have written letters of support. Dottie Sandusky plans to attend the hearing, he said.

Given the number of charges, the serious nature of his crimes and his age, the 68-year-old Sandusky faces the likelihood of a sentence that will send him to state prison for the rest of his life.

Sandusky was convicted for incidents that included some attacks inside Penn State athletic facilities.

"The important thing for us is, it starts the appellate process," Amendola said.

One element of the appeal is expected to be a claim that the defense did not have time to adequately prepare for trial. Sandusky was charged in November, following a lengthy investigation.

Tom Kline, lawyer for a young man who said Sandusky groped him in a shower when he was 12 or 13, said his client plans to read a statement Tuesday.

"He's going to tell the judge how this has affected him, how it's been painful and difficult," Kline said.

Lead prosecutor Joe McGettigan said as many as a half-dozen victims are expected to be heard.

Karl Rominger, another Sandusky defense lawyer, said the sentencing and a related proceeding to determine if Sandusky qualifies as a sexually violent predator under Pennsylvania's version of Megan's Law should take less than two hours.

Rominger said a 30-year minimum sentence - which would keep Sandusky behind bars at least until he's nearly 100 - was probably the most the defense could hope for.

Rominger said on WHP radio in Harrisburg, Pa. that Sandusky knows the judge could impose a longer sentence if Sandusky insists he is innocent, but some offenses carry mandatory minimums that are likely to translate into an effective life sentence.

"Why worry about the niceties of pleasing the court when it won't change your sentence?" Rominger said.

After Tuesday's sentencing hearing, Sandusky most likely would be sent to Camp Hill state prison. There, he would be tested and evaluated by Department of Corrections personnel, who will determine which institution he will be sent to.

The following is a transcript of what Sandusky said Monday on the Penn State radio station:

I'm responding to the worst loss of my life. First I looked at myself. Over and over, I asked why? Why didn't we have a fair opportunity to prepare for trial? Why have so many people suffered as a result of false allegations? What's the purpose? Maybe it will help others. Some vulnerable children who could be abused might not be as a result of all the publicity. That would be nice, but I'm not sure about it. I would cherish the opportunity to become a candle for others as they have been a light for me.

They can take away my life, they can make me out as a monster, they can treat me as a monster, but they can't take away my heart. In my heart, I know I did not do these alleged, disgusting acts. My wife has been my only sex partner and that was after marriage. Our love continues.

A young man who is dramatic and a veteran accuser and always sought attention started everything. He was joined by a well-orchestrated effort of the media, investigators, the system, Penn State, psychologists, civil attorneys and other accusers. They won. I've wondered what they really won. Attention, financial gain, prestige will all be temporary.

Before you blame me, as others have, look at everything and everybody. Look at the preparation for the trial and the trial. Compare it to others. Think about what happened, why and who made it happen. Evaluate the accusers and their families. Realize they didn't come out of isolation. The accusers were products of many more people and experiences than me. Look at their confidants and their honesty. Think about how easy it was for them to turn on me given the information, attention, and potential perks. I never labeled or put down them or their families. I tried and I cared, then asked for the same. Please realize all came to the Second Mile because of issues. Some of those may remain.

We will continue to fight. We didn't lose to proven facts, evidence, accurate locations and times. Anything can be said. We lost to speculation and stories influenced by people who wanted to convict me. We must fight unfairness, inconsistency and dishonesty. People need to be portrayed for who they really are. We've not been complainers, and we couldn't have kids we adopted, and we didn't have time to prepare for trial. We still gave it our beset. We will fight for another chance. We have given many second chances and now will ask for one.

It will take more than our effort. Justice will have to be more than just a word, fairness be more than just a dream. It will take others -- somebody apolitical with the courage to listen, to think about the unfairness, to have the guts to stand up and take the road less traveled. I ask for the strength to handle everything and the willingness to surrender only to God, regardless of the outcome.