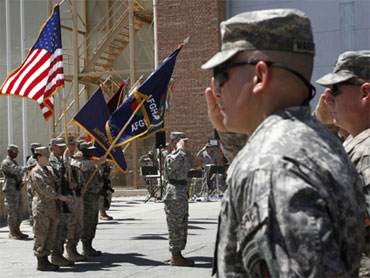 For the troops serving in Afghanistan every day is Memorial Day. Around 400 men and women in uniform took time away from fighting the war to stand together under the blazing sun at Bagram Air Field and remember their fallen.

General Stanley McChrystal, commander of U.S. forces in Afghanistan told his troops that "today is about people. It is about the people we have lost and most importantly it's about people who have been left behind."

This is America's longest war. More than a thousand men and women have been killed and deadly battles are still raging across the country. War is not a memory here. It's a deadly daily reality.

The soldiers at Bagram received a poignant reminder of the reason why they're here. Shipped from Breezy Point in New York, a beam from one of the World Trade Towers was transformed into a memorial. Etched with the code that everyone understands - WTC 911 01 - the beam will stand at Bagram until the last American soldier leaves Afghanistan.

Moments after the ceremony was over, McChrystal was back on his helicopter, headed for the next base. Landing at a training camp where the Afghan army's elite troops train under American special forces. This may be an American holiday but the Afghans are mourning their fallen too and the general came to thanks them for their sacrifice.

Next stop is a visit with coalition forces in Logar province. Driving into a nearby village, the general jumped out of armored vehicle and walked to the local mosques. Children gathered around the small group of uniformed men, giggling shyly as the commander, walking briskly ahead of his escorts, waved at them.

Village elders gathered at the village mosque to meet the commander of the US soldiers they have been living with for the past nine years. McChrystal listened patiently as they described the renovation work - paid for by the coalition - at the mosque and then asked the elders to report any Taliban activity to the coalition.

McChrystal knows that this war will not be won on the battlefield. He is reshaping the military strategy here. Under his command, U.S. troops are meeting the Taliban in the battlefield with growing intensity and meeting everyone else with a big smile and a handshake.

Walking back to his convoy, the general surveyed made a point of stopping to greet every passing villager. The memory of the troops who had died here was very much on his mind but, like every other American soldier in Afghanistan, he has a job to do.