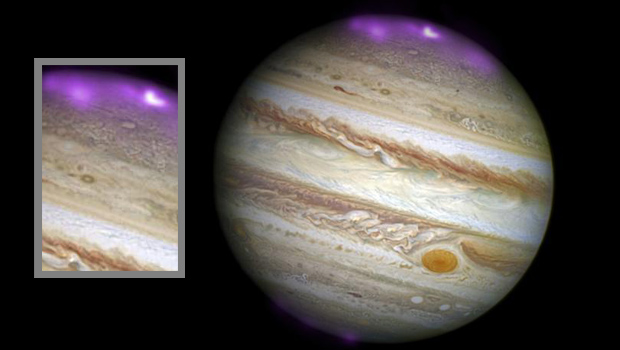 Newly released images from space show a rare view of Jupiter's X-ray version of the Northern Lights. Based on observations from the Chandra X-ray telescope, the vivid aurora is depicted as a magenta glow surrounding the planet's north pole. In reality, the X-rays lie in a portion of the light spectrum not visible to human eyes.

Astronomers say this aurora on Jupiter, which occurred in 2011, covers an area larger than Earth's entire surface.

New research published in the Journal of Geophysical Research explains that the phenomenon is caused by solar storms which produce an X-ray aurora that is eight times brighter than normal, and hundreds of times more energetic than Earth's own aurora borealis.

The research comes out the University College London's Mullard Space Science Laboratory and marks the first time ever that Jupiter's aurora has been examined at the same time that a giant sun storm hit the planet.

"There's a constant power struggle between the solar wind and Jupiter's magnetosphere," lead author William Dunn said in a press release. "We want to understand this interaction and what effect it has on the planet. By studying how the aurora changes, we can discover more about the region of space controlled by Jupiter's magnetic field, and if or how this is influenced by the sun. Understanding this relationship is important for the countless magnetic objects across the galaxy, including exoplanets, brown dwarfs, and neutron stars."

What is a solar storm? The sun is constantly shooting out particle streams into space in the form of a solar wind. As a giant storm explodes forth, these winds increase in intensity, compressing Jupiter's magnetosphere -- the area surrounding the planet in space where Jupiter exerts the greatest magnetic force. The boundary can move with the wind 1.25 million miles through space. This is essentially the trigger that creates the X-rays in the planet's Northern Lights.

We may soon learn even more about the planet from NASA's Juno spacecraft mission, which is expected to reach Jupiter's orbit this summer. It should help astronomers learn more about Jupiter's origin, which in turn would shed light on how the solar system formed.

Juno will look at the relationship between the solar winds and the planet's magnetic field. NASA hopes to determine how these X-rays form, using data also collected by the European Space Agency's X-ray space observatory, the XMM-Newton, and NASA's own Chandra X-ray observatory.

"Comparing new findings from Jupiter with what is already known for Earth will help explain how space weather is driven by the solar wind interacting with Earth's magnetosphere," Graziella Branduardi-Raymont, an astrophysicist at UCL Mullard Space Science Laboratory and a co-author of the study, said in the release. "New insights into how Jupiter's atmosphere is influenced by the sun will help us characterize the atmospheres of exoplanets, giving us clues about whether a planet is likely to support life as we know it."

The team monitored the X-rays over the course of two 11-hour observations in October 2011. The data that they collected was used to compile a spherical 3D image used to find the source of the X-ray activity.

"In 2000, one of the most surprising findings was a bright 'hot spot' of X-rays in the aurora which rotated with the planet," Dunn added. "It pulsed with bursts of X-rays every 45 minutes, like a planetary lighthouse. When the solar storm arrived in 2011, we saw that the hot spot pulsed more rapidly, brightening every 26 minutes. We're not sure what causes this increase in speed but, because it quickens during the storm, we think the pulsations are also connected to the solar wind, as well as the bright new aurora."