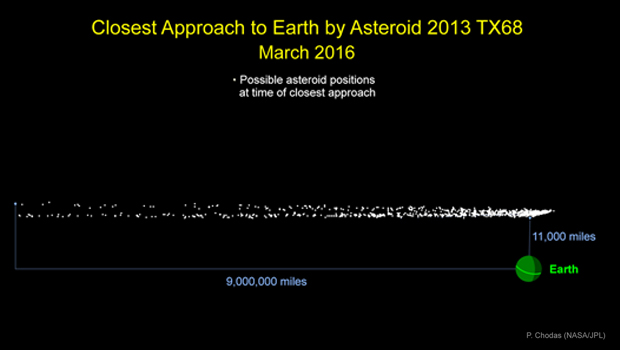 An asteroid that passed by Earth at a safe distance of 1.3 million miles away two years ago, is set to make a return appearance. The asteroid is expected to fly by again on March 5, and this time it could get much closer to Earth -- possibly as close as 11,000 miles, according to NASA.

NASA's Center for NEO Studies (CNEOS) at the Jet Propulsion Laboratory declared that there is no possibility of the object impacting Earth. Its path is projected to range anywhere from 11,000 miles to as far as 9 million miles away.

The asteroid, which is estimated to be only 100 feet in diameter, would likely burst apart in the atmosphere if it got too close.

Projected flybys by the same small asteroid in 2046 and 2097 reportedly have an even lower probability of colliding with Earth.

"The possibilities of collision on any of the three future flyby dates are far too small to be of any real concern," Paul Chodas, manager of CNEOS, said in a press release. "I fully expect any future observations to reduce the probability even more."

The asteroid was discovered by the NASA-funded Catalina Sky Survey in October 2013 as it approached our planet on the nighttime side. NASA monitored the asteroid for three days before it passed over into Earth's daytime sky. Given the short amount of time that the object was tracked, the research team was unable to predict its exact orbit around the sun.

"This asteroid's orbit is quite uncertain, and it will be hard to predict where to look for it," Chodas added. "There is a chance that the asteroid will be picked up by our asteroid search telescopes when it safely flies past us next month, providing us with data to more precisely define its orbit around the sun."