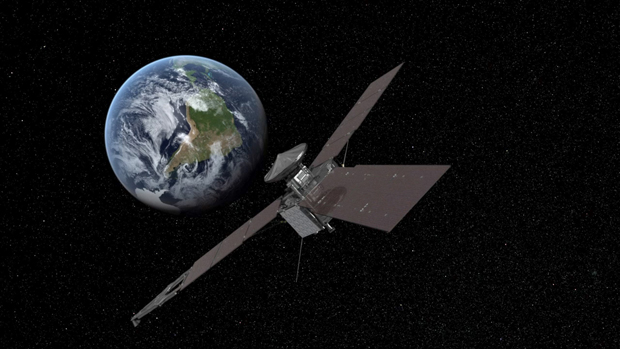 NASA's Jupiter-bound Juno spacecraft went into protective "safe mode" just 10 minutes after a low-altitude gravity-assist flyby of Earth Wednesday, but mission managers said Thursday they were back in touch with the spacecraft and optimistic about a full recovery from whatever triggered the upset.

Project Manager Rick Nybakken at the Jet Propulsion Laboratory in Pasadena, Calif., said engineers were downloading stored telemetry from the spacecraft and were developing plans to restore it to normal operation.

"We're starting now to develop a plan to bring the spacecraft back into operational status and we think putting that plan together is going to take a few days," he told CBS News in a telephone interview.

"Obviously, we need to finish downloading and reviewing the current data. The takeaways: we're still in safe mode, we're still safe and we're proceeding in a very calm and deliberate manner to take care of this wonderful asset."

The centerpiece of a $1.1 billion mission, Juno was launched atop a United Launch Alliance Atlas 5 rocket from the Cape Canaveral Air Force Station, Fla., on Aug. 5, 2011. Even using the most powerful version of the workhorse rocket, Juno did not have enough energy to fly directly to Jupiter.

Instead, the solar-powered spacecraft was launched on a trajectory that carried it beyond the orbit of Mars and out into the asteroid belt before the sun's gravity finally began pulling the craft back into the inner solar system.

In September 2012, flight controllers carried out precisely timed rocket firings to slightly alter the probe's course, setting up Wednesday's gravity-assist flyby. By flying close to Earth, Juno was able to use the planet's gravity to boost its velocity enough to head out for Jupiter.

Closest approach occurred at 3:21 p.m. EDT (GMT-4) as the spacecraft passed about 350 miles above South Africa, just after entering Earth's shadow for a 19-minute-long eclipse.

Nybakken said Juno's flight computer encountered a problem of some sort 10 minutes after closest approach, triggering automatic safe mode routines designed to put the spacecraft in a stable configuration in the event of unexpected events, programming problems or malfunctions that are beyond its ability to resolve.

In safe mode, the flight computer stops executing stored commands and makes sure the spacecraft is "power positive" with its solar arrays pointed at the sun. The spacecraft then stands by for instructions from Earth.

"We've re-established communications, including full commandability, we verified we were in a safe, stable state, which means sun-pointed and getting power from the arrays as expected," Nybakken said late Thursday. "We are currently going through our diagnostic procedures to analyze the anomaly and just this morning we started downloading and reviewing the on-board engineering and science-slash-imaging data."

Juno was programmed to exercise its instruments during the flyby, capturing views of the Earth-moon system and collecting other data. Nybakken said the imaging sequence started normally and presumably all of the data was recorded on board before the event that triggered the computer's transition to safe mode.

"We're hopeful ... that we'll get all the data up to that point," he said. "But we really won't know until we get it all down and go through it."

Asked if engineers have any ideas about what caused the safe mode transition, Nybakken said "we don't like to speculate. We have some strong suspicions, but I'd rather not put those out" yet. Asked about Juno's overall health, he said the spacecraft appeared to be in good shape.

In the meantime, Juno came through the Earth flyby precisely on course to Jupiter. If all goes well, the spacecrat will brake into a polar orbit around the giant planet on July 4, 2016, kicking off a one-year 33-orbit mission to learn more about Jupiter's atmosphere and evolution.