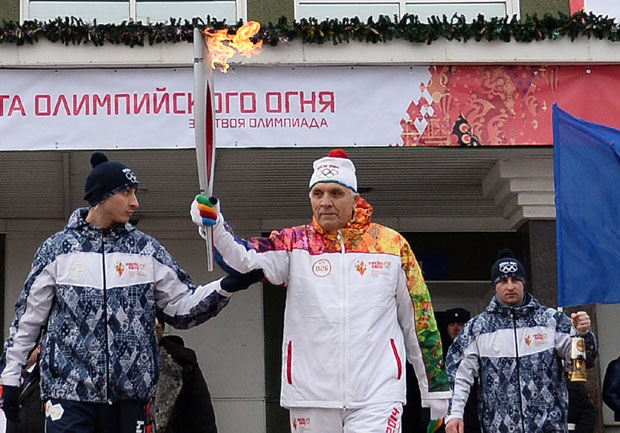 Russia's Olympic torch relay has been the longest and most ambitious ever staged – a four-month, 40,000-mile trek that has seen 14,00 people carry the flame on foot, by snowmobile, on horseback – and even by space craft. But the relay leading up to the Sochi 2014 Winter Games in February has been clouded by a string of mishaps that reached its nadir earlier this week.

On Monday, an official said a torchbearer died of a heart attack after carrying the Olympic flame as part of Russia's torch relay.

Vadim Gorbenko, 73, a sports school director and Greco-Roman wrestling coach, felt ill after walking 500 feet with the torch in his home city of Kurgan in western Siberia, said Roman Osin, spokesman for the Sochi 2014 torch relay.

"He returned to the gathering place and was photographed, then he said he was not feeling well and was taken to hospital, but the doctors were unable to save him," Osin, who travels with the relay, said by telephone.

"We express our deepest condolences to his loved ones."

Osin said Gorbenko, who had trained top Russian wrestlers and won state honours, had suffered two heart attacks in the past. He was conscious when he was taken to hospital and had spoken to his son at his bedside before his death.

Before Gorbenko's death, the torch relay had been plagued by a string of problems – mostly related to the torch itself.

The flame has gone out dozens of times since President Vladimir Putin handed it off in Red Square on Oct. 6, and once it had to be relit by a civilian with a Zippo lighter. Last month a torchbearer's jacket caught fire as he carried the flame though another Siberian city.

Cosmonauts took an unlit torch on a spacewalk last month. The Olympic flame has been to the north pole and Lake Baikal on a journey that will end at the opening ceremony in Sochi on Feb. 7.

Putin appears eager to improve Russia's image and build his own legacy by hosting the country's first post-Soviet Olympics, but he has faced criticism over legislation seen in the West as anti-gay and some world leaders are staying away from the Games.

The 14,000 torchbearers in the Sochi 2014 relay are not asked to sign releases but are warned that it involves some physical exertion and their health is their own responsibility, Osin said.