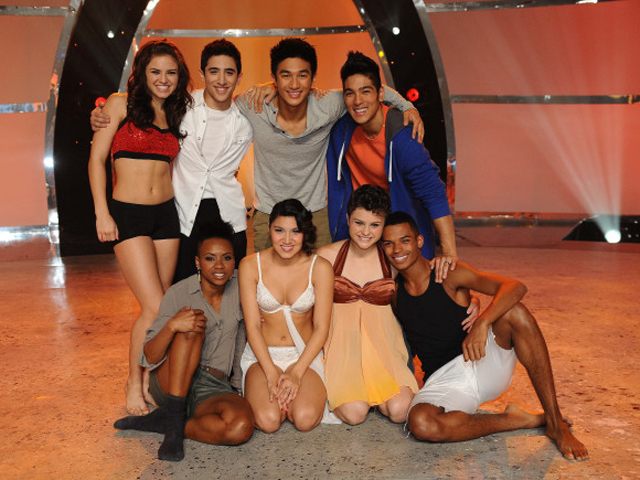 (CBS) Last night's "So You Think You Can Dance" featured acclaimed director Rob Marshall and Lady Gaga on the judging panel, and the Top 8 finalists gave them 12 performances to critique.

The appearance was classic Gaga - she wore long blue wig, psychedelic costume and a gigantic military  hat that looked like it came from a Sgt. Pepper cover band. But she offered insightful advice as a performer, and one of the numbers moved her to tears while another moved her to throw her shoes.

In comparison, Marshall was subdued - and probably overshadowed by the pop star at the other end of the judges' table. But the Tony and Emmy winner (who's also an Oscar and Golden Globe nominee) still had a lot to say.

So, how did everyone do?

Pictures: "So You Think You Can Dance" Season 8

Each of the Top 8 performed a number with an All-Star, and then paired off for four more numbers.

The night opened with a quickstep from Sasha and Pasha that the judges largely praised, but, as Marshall noted, the genre of dance doesn't really allow Sasha to shine.

Then, Caitlynn and All-Star Ivan performed a hip-hop number that felt generic and safe. The judges gave her faint praise, but it probably won't be enough to save her from the bottom four.

Jordan and Ade took on a jazz number choreographed by Tyce Diorio that played to her sass and flexibility. The lifts and jumps were great, but the pair had zero chemistry.

Melanie and Neil danced a Mandy Moore contemporary routine that wowed the viewers and judges, especially with that running leap she took into Neil's arms. Lady Gaga even offered her a job, telling Melanie, "I would hire you to dance on my tour."

Ricky and Anya's jive was fun and lively, but the judges spent most of their critique time praising his smile and not mentioning his dance skills. Gaga told him, "I love that you're up there, because that's you." This probably means he's going home.

Jess was paired up with All-Star Lauren for a hip-hop number from Nappytabs. The judges praised him for listening to their critiques and improving - and he has been improving throughout the season. This was probably one of his best performances.

Then, Tadd and Lauren F. put on a jazz routine in which  they were burglars pulling off a heist. Tadd, a B-boy, continues to pick up choreography like a pro, and kept on going even when he lost his hat.

Marko and Allison's contemporary number is the one that got a standing ovation from the judges - and moved Lady Gaga to tears. And as if Sonya Tayeh's choreography wasn't moving enough, Marko's mom flew halfway around the world from Guam to be in the audience. Judge Mary Murphy tells him he's her favorite dancer, and Nigel Lythgoe tells everyone to call their moms. Tear.

Then it was time for the finalists to dance in pairs. Caitlynn and Tadd paired off for a foxtrot that channeled Ginger Rodgers and Fred Astaire. Gaga offered Caitlynn some befuddling advice about her hands: "Every once and a while, with your hands, I get a little bit of, 'I've won a lot of trophies!' Right? And that's good that you've won a lot of trophies. That's nice. But you know what? After I sell a bunch of records, I take all the platinum ones off the walls, and I pretend like I haven't sold a damn one and I've got to go do it all again. So I think you should just go relax those hands a bit and just remind yourself that maybe the trophies are in the closet and just work that flower [pinned in her hair], honey!"

Marko and Ricky danced as a hip-hop cleanup crew in a number with some fun tricks but failed to deliver overall. It looked as if the two had trouble keeping up with the choreography once the music sped up. They've both done better.

Jordan and Jess did a rumba to Adele's "Set Fire to the Rain," which failed to ignite much of anything. The judges critiqued their lack of chemistry and it wasn't the right song for this kind of dance. But Jess, who had trouble with lifts earlier in the season, seemed to have no trouble with them tonight.

And finally, Melanie and Sasha, together in a jazz number choreographed by Sonya Tayeh. It played to all their strengths - Sasha's powerful abandon and Melanie's technical prowess - and was definitely the highlight of the night. Lady Gaga called it "the performance of the evening" and loved it so much that she decided to take off her gazillion-inch heels and throw one to Sasha and one to Sonya. In Gaga-World, that's high praise indeed.

Our prediction for who's heading home: Caitlynn and Ricky

What did you think of last night's performances, and Lady Gaga and Rob Marshall as judges? And who do you think is going home tonight? Share your thoughts in the comments and come back here tomorrow to find out who was eliminated.