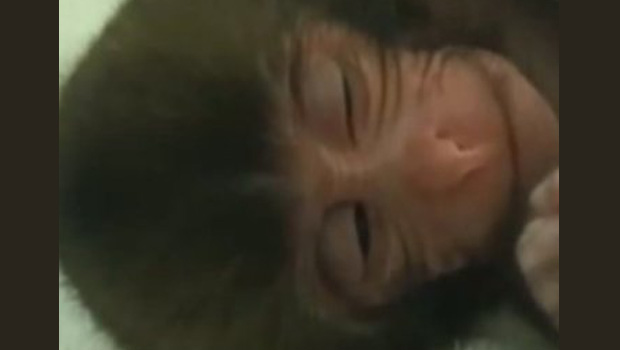 This one is sure to put a smile on your face -- a team of Japanese researchers found that sleeping baby monkeys could shed light on the origins of laughter and smiles in humans.

When either a chimp or a human baby sleeps they sometimes have small, smirking facial movements that look like smiles. Now it appears that other, more distantly related primates also share this adorable facial feature.

A team from the Kyoto University Primate Research Institute said that these facial movements can be found in newborn Japanese macaques -- primates that are further out from humans and chimps in the larger family tree. That would suggest that the behavior developed much earlier in our evolutionary history.

"About a decade ago we found that chimp infants also display spontaneous smiles," study author Masaki Tomonaga said in a press release. "Since we see the same behavior in more distant relatives, we can infer that the origin of smiles goes back at least 30 million years, when old world monkeys and our direct ancestors diverged."

This research started when the study's lead author Fumito Kawakami noticed that some baby macaques appeared to be "smiling" when they were getting regular checkups. The baby monkeys took naps during the sometimes-lengthy appointments. The researchers seemed to notice a trend, and Kawakami said they decided to "empirically examine the behavior."

The researchers studied 58 "spontaneous smiles" from seven macaques. All of the monkeys smiled at least once.

"Spontaneous macaque smiles are more like short, lopsided spasms compared to those of human infants. There were two significant similarities; they both happened between irregular REM sleep, and they show more lopsided smiles compared to symmetrical, full smiles," Kawakami said. "A major difference, though, is that the smiles were much shorter."

Other than sounding like the best day at the office ever, examining the little monkeys' sleep-induced smiles sheds light on better understanding our primate cousins. Past research seemed to indicate that a baby's spontaneous smile developed as a bonding mechanism between parent and infant. This research team said that the "smiles" appear to be more of a grimace than a sign that the animal was having a pleasant dream.

The researchers said that spontaneous smiles might serve the purpose of developing cheek muscles so that primates like humans or chimpanzees can grow to be more expressive with laughs and grimaces.

What about other types of animals? While this study focused exclusively on primates, Tomonaga said not enough is known to rule out whether other kinds of animals also spontaneously smile.

"There are case reports about mice laughing when they get tickled and dogs displaying facial expressions of pleasure," Tomonaga said. "It may be the case that many mammal infants display spontaneous smiles, in which case smiling would have an older evolutionary origin. Who knows?"

Ahead of elections, states reject federal help to combat hackers

Blue and black? Or white and gold?
Brian Mastroianni