A furrowed brow, lifted chin and pressed-together lips -- a mix of anger, disgust and contempt -- are used to show negative moral judgment among speakers of English, Spanish, Mandarin and American Sign Language (ASL), according to a new study published in the May issue of the journal Cognition. In ASL, speakers sometimes use this "not face" alone, without any other negative sign, to indicate disagreement in a sentence.

"Sometimes, the only way you can tell that the meaning of the sentence is negative is, that person made the 'not face' when they signed it," Aleix Martinez, a cognitive scientist and professor of electrical and computer engineering at The Ohio State University, said in a statement.

Martinez and his colleagues previously identified 21 distinct facial emotions, including six basic emotions (happiness, sadness, fear, anger, surprise and disgust), plus combinations of those (happy surprise, for example, or the kind of happy disgust someone might express after hearing a joke about poop).

The researchers wondered if there might be a basic expression that indicates disapproval across cultures. Disapproval, disgust and disagreement should be foundational emotions to communicate, they reasoned, so a universal facial expression marking these emotions might have evolved early in human history. [Smile Secrets: 5 Things Your Grin Reveals About You]

The researchers recruited 158 university students and filmed them in casual conversation in their first language. Some of these students spoke English as a native tongue, while others were native Spanish, Mandarin Chinese or ASL speakers. These languages have different roots and different grammatical structures. English is Germanic, Spanish is in the Latin family and Mandarin developed independently from both. ASL developed in the 1800s from a mix of French and local sign language systems, and has a grammatical structure distinct from English.

But despite their differences, all of the groups used the "not face," the researchers found. The scientists elicited the expression by asking the students to read negative sentences or asking them to answer questions that they'd likely answer in the negative, such as, "A study shows that tuition should increase 30 percent. What do you think?"

As the students responded with phrases like, "They should not do that," their facial expressions changed. By analyzing the video of the conversations frame by frame and using an algorithm to track facial muscle movement, Martinez and his colleagues were able to show that a combination of anger, disgust and contempt danced across the speakers' faces, regardless of their native tongue. A furrowed brow indicates anger, a raised chin shows disgust and tight lips denote contempt.

The "not face" was particularly important in ASL, where speakers can indicate the word "not" either with a sign or by shaking their head as they get to the point of the sentence with the negation. The researchers found, for the first time, that sometimes, ASL speakers do neither -- they simply make the "not face" alone.

"This facial expression not only exists, but in some instances, it is the only marker of negation in a signed sentence," Martinez said.

The researchers are now building an algorithm to handle massive amounts of video data, and hope to analyze at least 10,000 hours of data from YouTube videos to understand other basic facial expressions and how people use expressions to communicate alongside language. 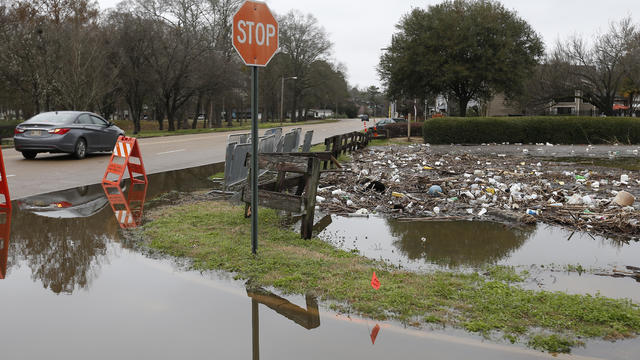 In some neighborhoods, the only way to get around is by boat.

In some neighborhoods, the only way to get around is by boat.