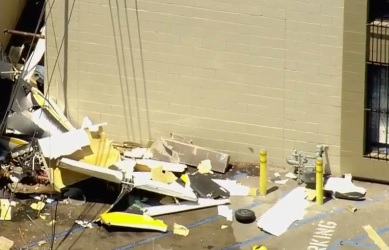 VAN NUYS, Calif.-- One person was killed after a small plane crashed into the side of a building near Van Nuys Airport in California, CBS Los Angeles reported.

A CBS Radio helicopter reporter witnessed the crash just after the plane took off at about 1:15 p.m.

The crash happened just a block away from the busy commuter airport.

Authorities confirmed at least one person was killed in the crash.

The building was not structurally damaged and there were no other injuries.

The plane was believed to be an Arion Lightning, a light-sport kit-type aircraft, according to Federal Aviation Administration spokesman Ian Gregor.

According to Gregor, the pilot was apparently performing "touch-and-go" practice maneuvers at Van Nuys Airport when the crash occurred.

Shaw described the plane as a light sport aircraft and that the pilot complained of something banging around upon take-off, and that the tower said his landing gear was loose.

"Before they could clear him to land, he turned really hard to the left and was sideways," Shaw said. "He started losing altitude, and my pilot was like, 'He's going to crash. He's going to crash' ... He just nosedived. It all happened in about 15 seconds."

"Never in all my time in the skies have I actually watched a plane crash...rather shaken up up here. Sometimes we forget the risks we take," Shaw tweeted.