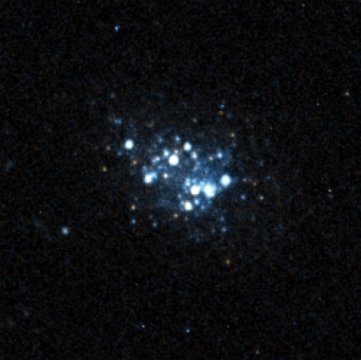 A small blue galaxy far, far away might shed light on the origins of our universe. A research team from Indiana University reports that the galaxy, dubbed Leoncino, or "little lion," holds the lowest level of metals or heavy chemical elements ever seen in any gravitationally-bound system of stars.

The astronomers say this galaxy, located about 30 million light-years from Earth in the Leo Minor constellation, could reveal details about the Big Bang itself. The study was just published in the Astrophysical Journal.

"Finding the most metal-poor galaxy ever is exciting since it could help contribute to a quantitative test of the Big Bang," John J. Salzer, a co-author of the paper and professor at Indiana University, said in a press release. "There are relatively few ways to explore conditions at the birth of the universe, but low-metal galaxies are among the most promising."

The composition of metal-poor galaxies like Leoncino -- officially named AGC 198691 -- is incredibly similar to that of the early universe. Locating these low-metal galaxies requires astronomers to look far and wide. The scientists explain that our own Milky Way, for instance, has a high level of heavier elements that are formed from stars churning out heavier elements and re-distributing the atoms back to the larger galaxy as they explode as supernovae.

The galaxy is part of the "local universe," which refers to the area of outer space that is around 1 billion light-years from Earth. This vast area contains several million galaxies, and understandably, only a small number have been labeled.

Scientists were able to determine what elements make up this galaxy because of bright lines emitted from the area of the galaxy that forms stars. These shining lights reveal atoms that correspond to specific gases, like oxygen, nitrogen, and hydrogen, and helium among others.

The team used spectrographs on two telescopes located in Arizona to read the lights. Initially, the galaxy was discovered by the Acreibo Legacy Fast ALFA radio survey project out of Cornell University.

Leoncino is classified as a dwarf galaxy. It is about 1,000 light-years in diameter and contains several million stars, a far cry from the estimated 200 to 400 billion stars in the Milk Way. Its blue tint is the result of hot stars that were recently created. Despite this, it has the lowest luminosity level over found in this kind of galaxy.

"We're eager to continue to explore this mysterious galaxy," Salzer added. "Low-metal-abundance galaxies are extremely rare, so we want to learn everything we can."

The study is published in the Astrophysical Journal.

It's called an SBU, or self-balancing unicycle, and enthusiasts say it could be the future of transportation