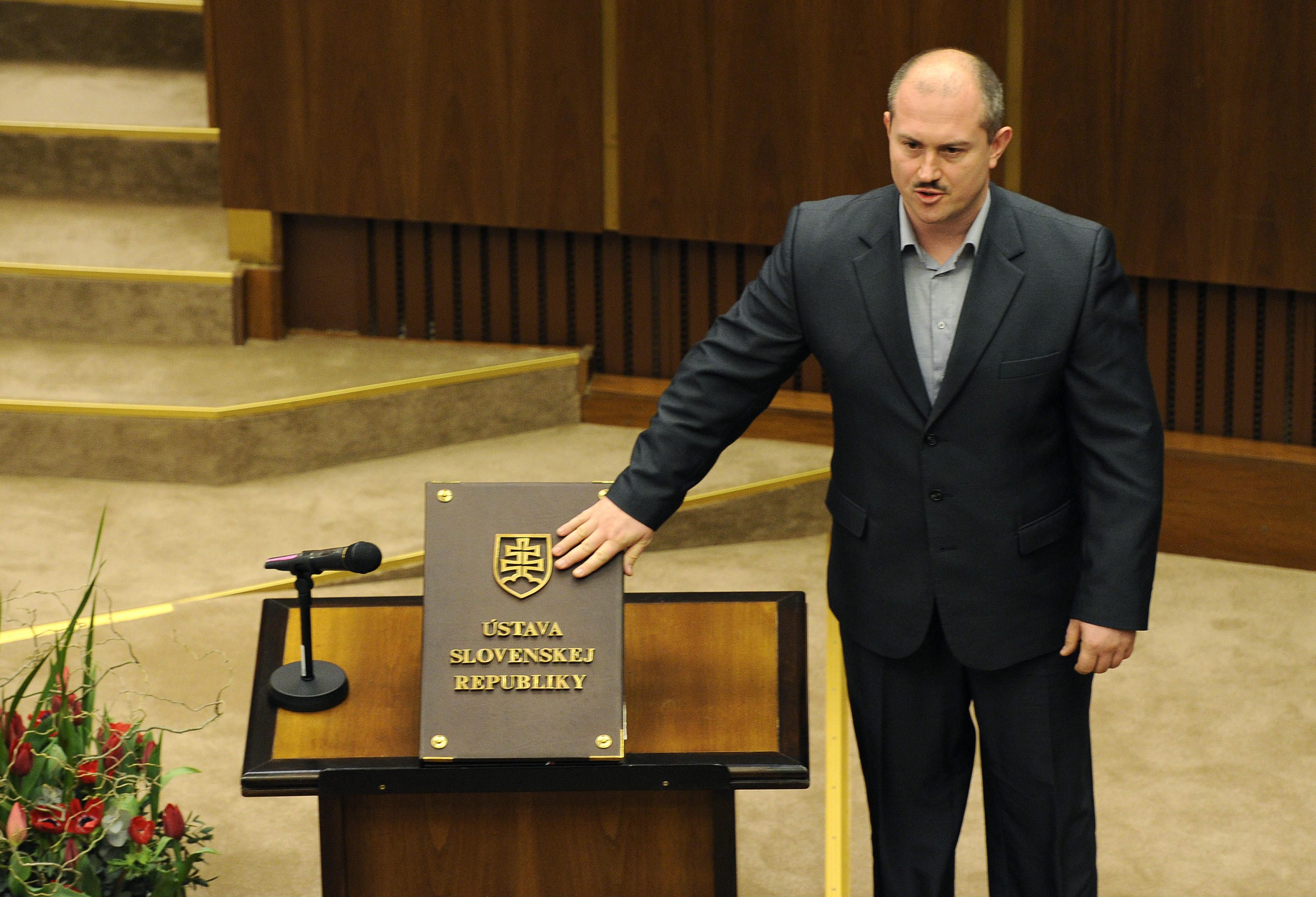 BRATISLAVA, Slovakia -- The wave of far-right parties across Europe has been gathering steam from Greece to France, Austria and Germany. While most of the continent’s extreme forces have taken pains to steer clear of Nazi imagery, Slovakia’s answer to the trend celebrates it.

Kotleba - The People’s Party Our Slovakia - won almost 10 percent of the seats in Parliament in March. It openly admires the Nazi puppet state which the country was during the World War II.

Party members use Nazi salutes, blame Roma for crime in deprived areas, consider NATO a terror group and want the country out of the alliance and the European Union.

The party takes its name from its leader, Marian Kotleba, previously chairman of the banned neo-Nazi Slovak Togetherness-National Party, which organized anti-Roma rallies and admired Nazi rule in Slovakia.

Thousands have signed a petition demanding that the party be banned. Analysts say the party’s popularity could grow even further.

Its simple slogan - “With courage against the system!” - attracts young people fed up with corruption and the inability of mainstream parties to deal effectively with the post-communist country’s problems.

In contrast to most of Europe’s far-right groups, “it’s truly neo-Nazi, it advocates the legacy of the Nazi war state,” says Eduard Chmelar, a Slovak political analyst.

Miroslav Mares, an expert on extremism from the Masaryk University in the Czech city of Brno, said the party belongs to the “hard core of right-wing extremism” in Europe. He said it has only some features similar to Greece’s Golden Dawn party and to Hungary’s Jobbik at its beginning.

What they have in common is targeting the mainstream politics.

“The parties like that are not looking for solutions, it’s all about protests,” Chmelar said. “You can see it globally. It’s the same with Donald Trump, it’s the same with (Marine) Le Pen in France. What’s important is to be against the system. They’re all riding on a wave of public dissatisfaction that has been growing.”

These parties “communicate and cooperate with each other, and that dramatically changes the situation in Europe, and that’s dangerous,” Chmelar said. “So far, there’s no recipe to stop them.”

Kotleba’s new party made news by launching patrols on trains in April in a reaction to a robbery blamed on a member of the Roma minority. Parliament banned such activities in October.

The party has proposed legislation to label non-governmental organizations that receive funding from abroad as foreign agents, and is trying to get the 350,000 signatures needed to force nationwide referendums on the country’s membership in NATO and the European Union.

“Among our major goals is above all a creation of an independent and self-sufficient Slovakia, that is Slovakia which has an autonomous foreign policy that is not dictated by any foreign structure, such as the European Union,” Milan Uhrik, a deputy chairman of the party, told The Associated Press in a rare interview. Kotleba refuses to talk to foreign media, The AP was told.

Speaking in the Parliament building, Uhrik said the EU has been turning into a super state with Brussels in power. “What’s the worst is that EU legislation is above Slovak law,” he said.

NATO is another target.

“It’s important for Slovakia to leave NATO because we consider NATO a terrorist organization. It doesn’t bring peace to the world, quite the contrary,” Uhrik said.

A celebration of wartime Slovakia remains particularly controversial, but Uhrik says it is not about fascism.

On Oct. 13, party members celebrated the 129th anniversary of the birth of Jozef Tiso, a Catholic priest and politician who was Slovakia’s war president. During his rule, some 60,000 Slovak Jews were transported to Nazi death camps. He was sentenced to death and hanged in 1947.

Rights activists have submitted a petition with 20,000 signatures calling for the party to be banned.  Prosecutors are reviewing that request.

“Racism, xenophobia, anti-Semitism, Holocaust denials and other such things have no place in democracy,” said Peter Weisenbacher from Bratislava’s Human Rights Institute.

Kotleba is not a newcomer on Slovakia’s political scene.

In 2013, he was elected the head of a regional government, campaigning on a strong anti-Roma ticket. He promised to have a recipe to solve problems with the embattled minority, calling its members “Gypsy parasites.”

He defeated a candidate of the ruling leftist Smer-Social Democracy party in a runoff vote despite that party’s chairman, Prime Minister Robert Fico, claiming that “a bag of potatoes” would beat Kotleba.

“It was a shock for me when (Kotleba) won the regional election,” said Ingrid Kosova, a Roma activist. “I remember people were calling me every day saying that they were ridiculed on the streets, they were not allowed to board buses, they were really afraid. Later on the situation calmed down but until now they live with worries and fears.”

In a region hit by unemployment around 15 percent, and over 25 percent in one county, Kosova said Kotleba succeeded in poor areas where the problems with the Roma minority are felt, and “which he misused to get to power.”

When the party won seats in Parliament, “I was abroad in the Czech Republic and I was considering staying there for good,” Kosova said.

During the celebration of the 70th anniversary of the Slovak National Uprising against the Nazi rule in 2014, with foreign presidents and other dignitaries in the central city of Banska Bystrica, the seat of Kotleba’s region, Kotleba was flying a black flag from his office and unveiled banners saying “Yankees go home!” and “Stop NATO!”

The Uprising is considered a defining moment of the Slovak history, and for most Slovaks a source of national pride because they stood against the Nazi rule.

Peter Gogola was mayor there at the time.

“I can’t forgive him that,” Gogola said. “My grandpa was forced to fight in the Hungarian fascist army and died at Stalingrad. I can’t stand fascism.”

Martin Slosiarik, the head of Bratislava-based pollster Focus, said 70 percent of those who voted for Kotleba are under 40. He said most of them voted for him not because they would share his extremist views but because he promised “to deal with the Roma and get rid of corruption.”

“They’ve learned how to work with the public opinion to create a picture that they’re the only force ready to challenge the current corrupt system,” Chmelar said. He predicted the party could reach more than 10 percent of the popular vote at the next election.

Full transcript: Taiwanese Rep. to the U.S. Bi-khim Hsiao on "Face the Nation"
Thanks for reading CBS NEWS.
Create your free account or log in
for more features.
View CBS News In
CBS News App Open
Chrome Safari Continue
Be the first to know
Get browser notifications for breaking news, live events, and exclusive reporting.