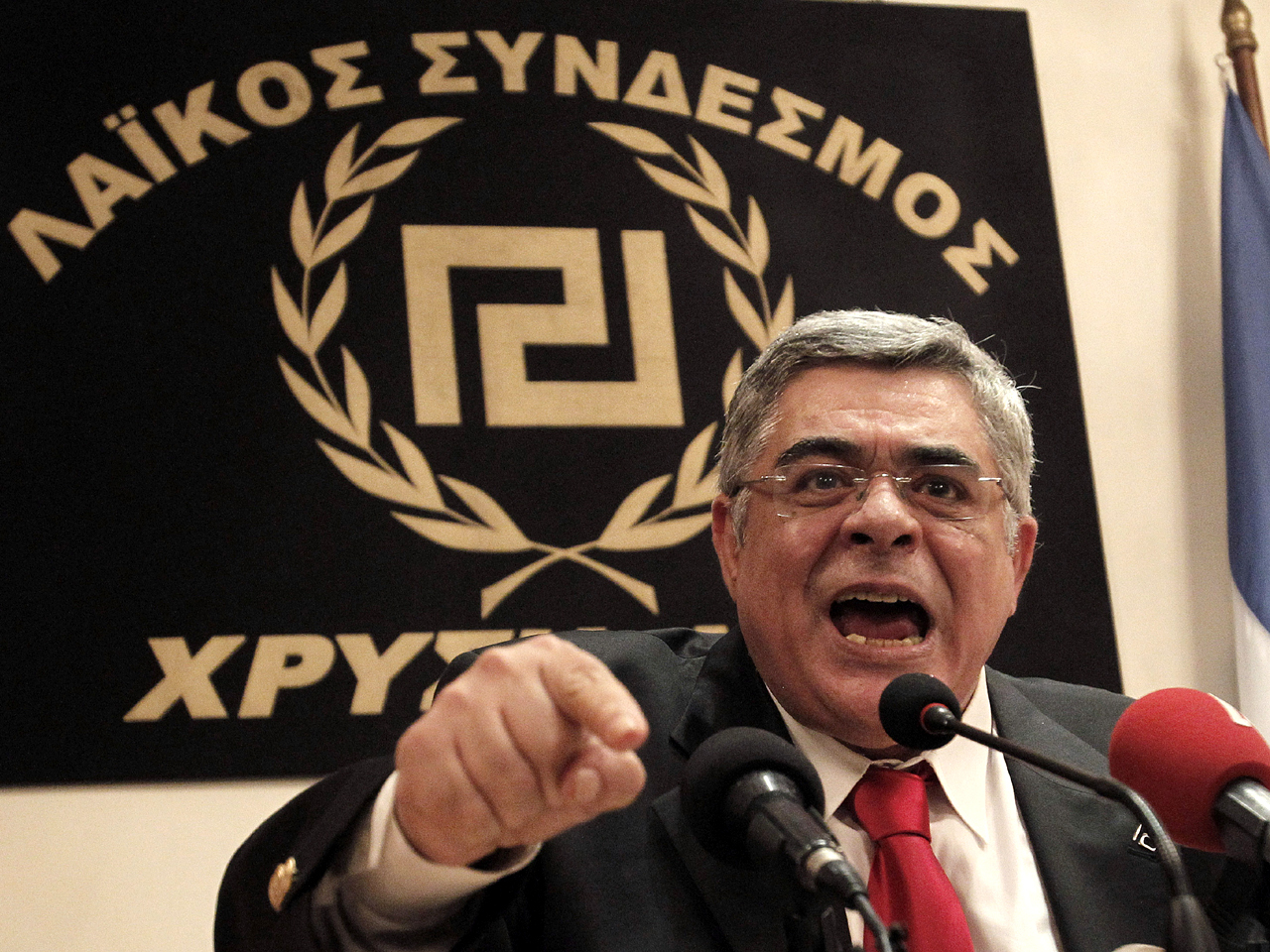 (CBS News) ATHENS, Greece - The first time the leader of Greece's far-right political party Golden Dawn was given a platform and a microphone, his words shocked a continent.

Journalists were told to stand up in a sign of respect while the party leader made a grand entrance. Nikolaos Michaloliakos, a former mathematician who was recently involved in a prostitution scandal, gave a rambling speech which included the proclamation that the official account of the Nazi death camp at Auschwitz was widely exaggerated.

Golden Dawn, which some call a neo-Nazi party, is not new to Greece. Its members and ideology have been around for years. What is new and different today is the legitimacy they've been granted by the votes of a deeply frustrated nation.

Boasting close to half a million votes in recent elections, the extreme right wing party gained 21 seats in parliament. It was a first for Greece, the country that invented democracy and resisted the advance of fascism.

Before the vote, few took Golden Dawn seriously, explains one Greek student. But scores of young men started canvassing for the party months ago.

With security concerns rife as the Greek economy hangs in the balance of convoluted European Union debt negotiations, burly young Dawn members escorted select Athenians to ATMs, providing security for people wanting to pull their money out of Greek banks.

That platform is all over the place. The party's slogan is "Greece: Only for the Greeks."

They have spoken vehemently against Judaic and Christian religions, advocating the worshiping instead of Olympian gods. They also advocate the very un-European right to bear arms but believe Greece should remain within the eurozone.

The top priority on their agenda, however, is expelling immigrants, who they blame for Greece's current woes, including the economic crisis.

The group is now more careful in conveying their message as they have to defend their seats in parliament in runoff elections.

No single party or coalition obtained a majority in the vote, so, according to the constitution, elections must take place again.

Vourdis dismisses the negative press as cheap shots at the newcomers to the political landscape. He denies that the party's symbol was inspired by the infamous Nazi swastika, in spite of obvious similarities.

He also says their salute, remarkably reminiscent of the hand gesture seen across Nazi Germany, is from ancient Greece - not the Third Reich.

But not everyone believes them.

Downtown Athens has many neighborhoods which have become home to thousands of immigrants. The capital, however, is one of the places where the Golden Dawn enjoys support, thanks to Greeks' anger at their current situation.

Athens resident Mike Kethathos said he's seen men with shaved heads beat up immigrants and scare away others recently, and he's happy with the outcome.

"These people from Afghanistan and Bangladesh and Africa are not programmed to work; they live like rats, they steal," said Kethathos.

Golden Dawn is tapping into very real anger and fear to achieve its political advent.

"We believe we should be armed," said the group's deputy leader Elias Panayotaros. "It's impossible for people to sleep in their houses and not be attacked by burglars. The attacks are from illegal immigrants 95 percent of the time.

"We have hundreds of thousands of immigrants from Iran, Afghanistan and all the places the U.S.A. is fighting wars. They (the U.S.) should take the refugees!"

CBS News spoke to Panayotaros in his Athens store, where he sells memorabilia and paraphernalia from his own party and just about every other possible right-wing group in Europe. There are photos of the Greece's military dictatorship period.

"Greece had no debt then, and nobody was committing suicide," he remarks.

His tone is calm, but there are frenetic outbursts. He challenges the CBS News crew to walk through downtown Athens with our camera equipment, virtually guaranteeing that we will be robbed and or attacked.

A walking tour of downtown, through alleys filled with makeshift stores and electric wires hanging precariously over narrow streets, reveals many immigrant workers, and they are frightened. The CBS News crew was not attacked.

A Pakistani man at one shop said his friend lost an eye in a vicious beating.

Most people don't really know about Golden Dawn, or even the elections or austerity measures in Greece; they're too busy working, trying to stay afloat in a dire economy.

Greek Jewish community leader Benjamin Albalas said the synagogue and Jewish school in Athens are guarded by police, but there have not been special-protection measures put in place since the extremist party's election victory. He hopes and expects to see support for the party fade when times improve.

But given the anger and fear in Greece, and the highly uncertain future for the country's economy, Albalas may have to wait longer than he would like.

Monica Villamizar is a correspondent for CBS Newspath.