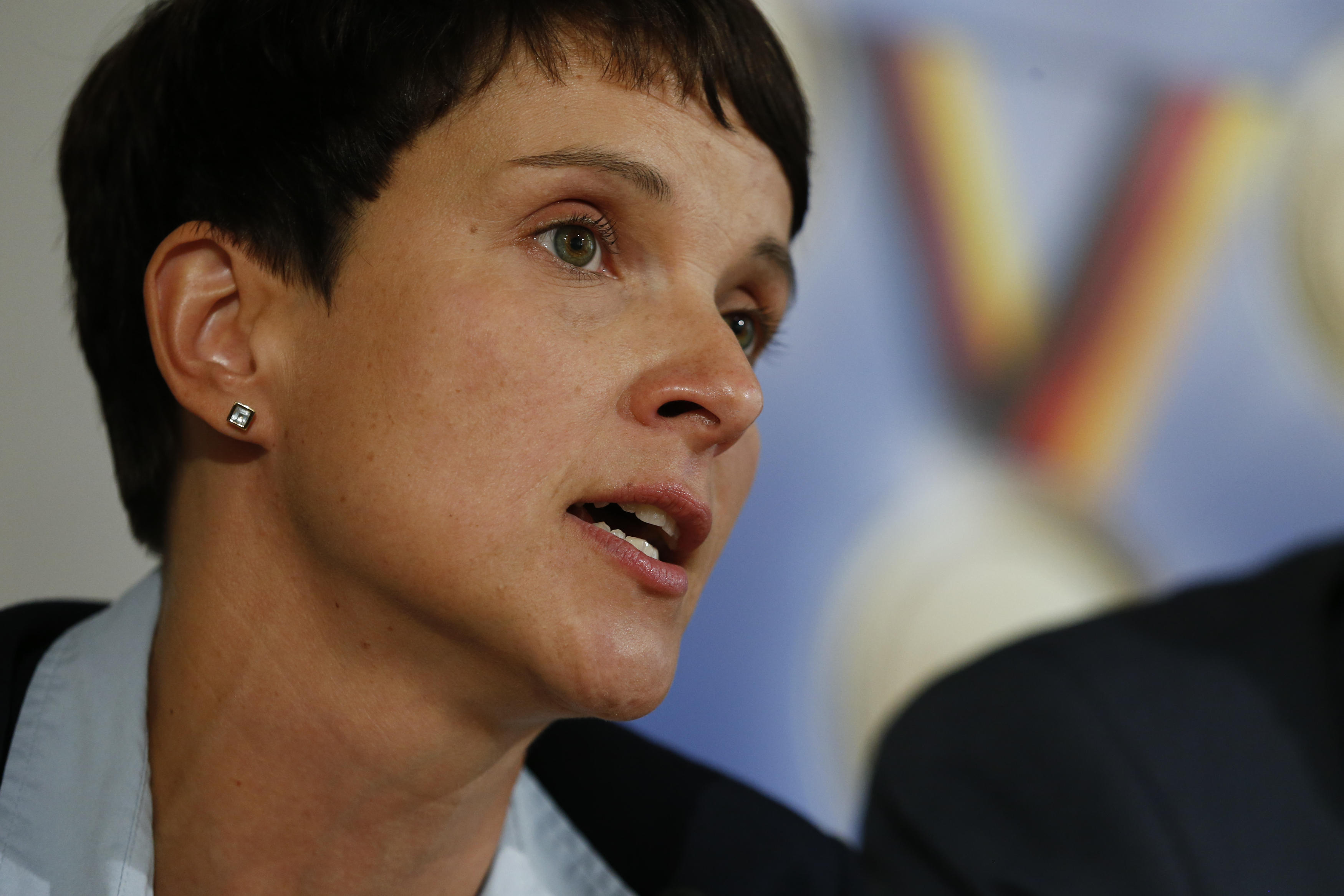 BERLIN A leading member of Alternative for Germany, the nationalist party whose recent elections successes have shaken the country’s political system, faced fierce criticism Monday after calling for a racially charged term favored during the Third Reich to be rehabilitated.

Party co-chairwoman Frauke Petry said in an interview published Sunday that words such as “voelkisch” shouldn’t be taboo any longer. The term refers to people who belong to a particular race and was frequently used by the Nazis - their party paper was called Voelkischer Beobachter.

“We should finally regain a relaxed, not uncritical but normal way of dealing with our nation and terms such as ‘Volk’ and words that are derived from it,” she told weekly Welt am Sonntag. Asked whether she would include the word “voelkisch,” Petry responded that she doesn’t use the term herself but dislikes the fact that it is only used negatively.

“Let’s work on giving the term a positive connotation,” she said.

Her remarks prompted a swift backlash from politicians, commentators and historians who warned that Petry’s party - known by its acronym AfD - was trying to legitimize ideas that were once at the core of Adolf Hitler’s Nazi ideology.

“Her statement that one should work on giving the term ‘voelkisch’ a positive meaning is disgusting,” daily Neue Westfaelische wrote in an editorial. The paper accused Petry of trying to blur the lines between conservative and extreme-right opinions.

“The voelkisch ideology of the 20th century resulted in National Socialist race hatred and the mass murder of Auschwitz,” Beck said.

AfD has become a potent electoral force in Germany since it was founded three years ago, sweeping into four state Parliaments on a wave of anti-migrant sentiment​ this year, most recently in Mecklenburg Western-Pomerania. The party is polling double-digit figures in advance of a vote in the city-state of Berlin on Sunday.

Along the way, AfD has tried to portray itself as the only true defender of the German “Volk.”

Although it has a common root with the English word “folk,” the term Volk gained an ethnic connotation in the early 19th century to signify the unity of German people who lived in dozens of mini-states across Central Europe. Nationalist sentiment didn’t evaporate with Germany’s unification in 1871 but rather grew into a myth of German uniqueness in the world.

The Nazis latched on to that, and encapsulated it in their slogan, “Ein Volk, Ein Reich, Ein Fuehrer” - “One People, One Nation, One Leader”

“There’s a fundamental difference with the word as it’s used in the French or English-speaking world,” historian Pascal Begrich said.

While some of its uses are ambiguous - such as AfD’s regular call for popular referendums, or Volksabstimmungen - other phrases have raised eyebrows.

When one of the party’s local chapters posted a Christmas message to Facebook followers urging them to think about their responsibility toward the “Volksgemeinschaft” - the community of people belonging to the same Volk - experts pointed out that this was a phrase straight out of the Nazi dictionary.

AfD rallies commonly include placards accusing Chancellor Angela Merkel and her government of being “Volksverraeter” - traitors to the Volk - for allowing hundreds of thousands of migrants into Germany last year.

Gideon Botsch, a political scientist at the University of Potsdam who has watched AfD’s rise, said the party has absorbed ideas from far-right thinkers who claim that Germany’s white population is being intentionally diluted.

The notion that a conspiracy is behind the recent influx of migrants to Germany has echoes of the country’s dark past, Botsch warned.

“They try to avoid openly anti-Semitic images but it’s clear that there are close parallels to anti-Semitic and anti-Jewish ideas,” he said.

Heidrun Kaemper, a linguist at the Institute of German Language, noted that AfD’s rhetoric is imbued with notions of “us” and “them.” The party’s program portrays migrants as uneducated and their women as excessively fertile compared with “women of German origin.”

AfD’s focus on national self-interest has already translated into concrete proposals to strengthen Germany’s armed forces, weaken international institutions such as the EU that were designed to keep Germany’s power in check after World War II, and return to the principle of granting citizenship only to those who can prove they have German blood.

AfD also wants more “positive, identity-inspiring aspects of German history” to break up what it calls the “current focus of Germany’s culture of remembrance on the period of National Socialism.” It’s the only time the party mentions the country’s Nazi past in its program.

So far, AfD’s tone and message seem to be striking a chord among a growing number of Germans, especially those who feel unrepresented by established parties.

“They are reacting to a mood in the population,” said Botsch.

American pro among skiers killed by avalanche in Japan