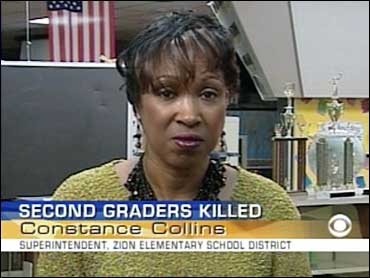 The superintendent of the school district attended by two young girls found slain in a northern Illinois park paints a picture of a close-knit school community whose collective heart has been broken.

Best friends Lauara Hobbs, 8 and Krystal Tobias, 9, vanished while riding their bikes and were found brutally stabbed to death, a day after they disappeared.

"These girls were in the same class. There were 22 students in the classroom. And they did a lot of things together. They appreciated the girls. They loved them. And their loss is felt by everyone here in the community."

School officials didn't tell the students when the bodies were found, but did notify parents, many of whom rushed to school at the end of the day to pick up their children and hold them in their arms.

Says Collins: "(It was) very emotional. The parents were very concerned, really, not knowing what was going on in the community, if someone was still at large, whether or not this was a single incident or if possibly something else could occur."

Both girls were extremely well-liked, Collins added: "The two little girls were favorites in their class. …Laura was very artsy and also enjoyed reading and taking the puppets in the classroom and pretending that she was acting.

"(Krystal) also had a sense of humor, was very witty. The children enjoyed reading, and they enjoyed volunteering, doing things for the teacher, and spending time with their classmates. They enjoyed playing out in the out-of-doors and running races whenever the class went outside to play."

Collins says there are mental health professionals available at the school to help the students cope.