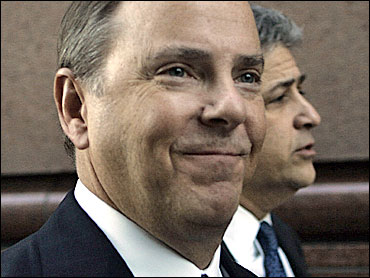 Attorney Andrew Cohen analyzes legal issues for CBS News and CBSNews.com. He is presently in Houston observing the Enron trial.

Former Enron executive Jeffrey Skilling is just another victim of the corporation's stunning demise, his attorney told jurors Tuesday morning during opening statements in this grand fraud and conspiracy trial. It is a legal position and strategy that in many ways is as arrogant and as brash as was Skilling himself when he helped run Enron into bankruptcy in 2001. And for this trial, in this place, it is another huge gamble for a man his colleagues say often gambled with Enron's future — and his own.

Skilling "never broke the law, he never told anybody to break the law, and he didn't lie, cheat or steal," Daniel Petrocelli told jurors during an opening statement packed with declarative sentences. "He did not steal one nickel from an employee, from a shareholder, from an investor, or from a 401 K plan." So "this is not a case about 'hear-no-evil, see-no evil,'" the lawyer said, "this is a case of 'there was no evil."' In fact, Petrocelli argued, there is so little evil involved in the story of Enron that all of the other former executives of the company who already have pleaded guilty (and who will soon testify for prosecutors against Lay and Skilling) have made a terrible mistake. They've confessed to crimes they didn't really commit.

That's why, in Petrocelli's words, his client is so eager to testify. "You could not keep him off that witness stand," the lawyer said about his client. "He is going to tell you in his own words whether he did any of these things…. He has nothing to hide… I can't tell you how relieved Jeff Skilling is to finally get into the sanctity of this courtroom." We'll see if Skilling still feels so happy to be in court under oath after prosecutors conclude their cross-examination of him. Still, the message Petrocelli wanted to send came in loud and clear to jurors: Skilling believes he has nothing is hide and is ready to sell the jury on his innocence.

For now, however, Petrocelli wants jurors to know and remember that Skilling was a "leader, all right" who, along with his co-defendant, Kenneth Lay, "changed the world." When his client left Enron suddenly in August 2001, his lawyer said, it was "sound" and "vibrant" and "everything was fine." Even now, Petrocelli told jurors, Enron doesn't look like "a crooked company… it's a company that this man (Skilling) was proud to lead." If that doesn't exactly jibe with your knowledge and understanding of what happened at and to Enron, as documented relentlessly since 2001, then you are not alone. But trials often are about parallel universes — and which ones jurors want to enter — and so Skilling and Petrocelli certainly have every right to try to push jurors into accepting their realities.

And, in this reality, Skilling isn't a cheating skunk who sold his Enron stock even as he was telling people to hold onto theirs. Instead he "took one last effort. He tried to raise $3 billion to save the company — people at Enron didn't even know he was doing it." And on top of that he was willing, his attorney said, to sink $60 or $70 million of his own money back into the company. If the best defense is a good offense — and that's a dynamic, too, that Enron often employed when it was still operating — than Skilling has positioned himself to lead the charge against the charges against him.

Earlier Tuesday, prosecutor John C. Huston had told jurors that the case was about "lies" not "accounting" but Petrocelli told them otherwise. "It is about accounting and it is about accounting issues — as well informed as Lay and Skilling are — they are not accountants," the defense lawyer said. Moreover, Petrocelli continued, there was never any criminal intent inside Enron. "Not one person ever thought they were breaking the law, told anyone that they were breaking the law, acted like they were breaking the law." This presages the defense argument that Lay and Skilling should not be convicted of a crime simply because they signed off upon deals that their accountants and lawyer sand bankers also signed off upon. Of course, that begs the question of whether all those professionals were acting illegally or improperly to begin with.

It's hard to know whether this opening gambit in this long trial is Skilling's attempt to bluff his way into an acquittal, or an acknowledgment that he has decided to go down fighting if he is to go down at all, or simply recognition that the only sound defense tactic here is to convince jurors, despite so much evidence to the contrary, that Skilling reasonably could have believed that everything at Enron was as rosy as he was saying it was — even until the bitter end. Or maybe it's a combination of all three. Whatever the case, it's an in-your-face defense that jurors are either going to reject quickly — like by tonight- — or be willing to ponder for just a while longer.

You rarely see a man and his legal defense match as soundly as Skilling matches the defense Petrocelli offered up for him Tuesday. Skilling's boldness got him in the trouble he's in today. We'll see whether his bold defense can bail him out.
By Andrew Cohen

The Bad Company Of Barack Obama