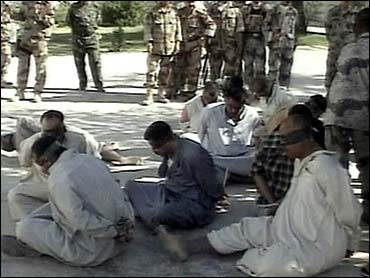 The Marines died Wednesday after their vehicle was attacked near Ramadi, 70 miles west of Baghdad, the military said. Officials in Ramadi had reported a roadside bomb blast in the pre-dawn hours.

A sailor attached to the Marines' unit, the 2nd Marine Division, II Marine Expeditionary Force, was also killed Wednesday in Ramadi by gunfire, the military said.

The six U.S. deaths raised Wednesday's toll from insurgent attacks to 58 killed, making it the deadliest day of violence in more than a month.

In Baghdad, Iraqi legislators seemed close to agreement on a demand by Sunni Arabs for more participation in the effort to draft a constitution.

A Shiite-dominated parliamentary committee drafting Iraq's new constitution offered a compromise to the country's Sunni Arab minority in an effort to break a deadlock over demands they have a bigger say in drawing up the charter.

The offer suggested that 13 additional Sunni Arabs join the committee in a parallel body. The head of a major Sunni religious organization and a spokesman for the community's largest political party rejected committee chairman Hummam Hammoudi's offer.

An agreement on the constitution would help defuse growing sectarian tension between the majority Shiites, who control the government, and the Sunnis. The minority is thought to make up the core of an insurgency that has killed at least 1,080 people since Prime Minister Ibrahim al-Jaafari's government was announced April 28.

The surge in attacks appeared aimed at derailing efforts by Shiite and Kurdish politicians to bring the disaffected Sunni Arab minority into the political process, particularly the drafting of the new constitution. The new charter must be approved by parliament by mid-August and put to a nationwide vote two months later. If passed, it will be the basis for a new election in December.