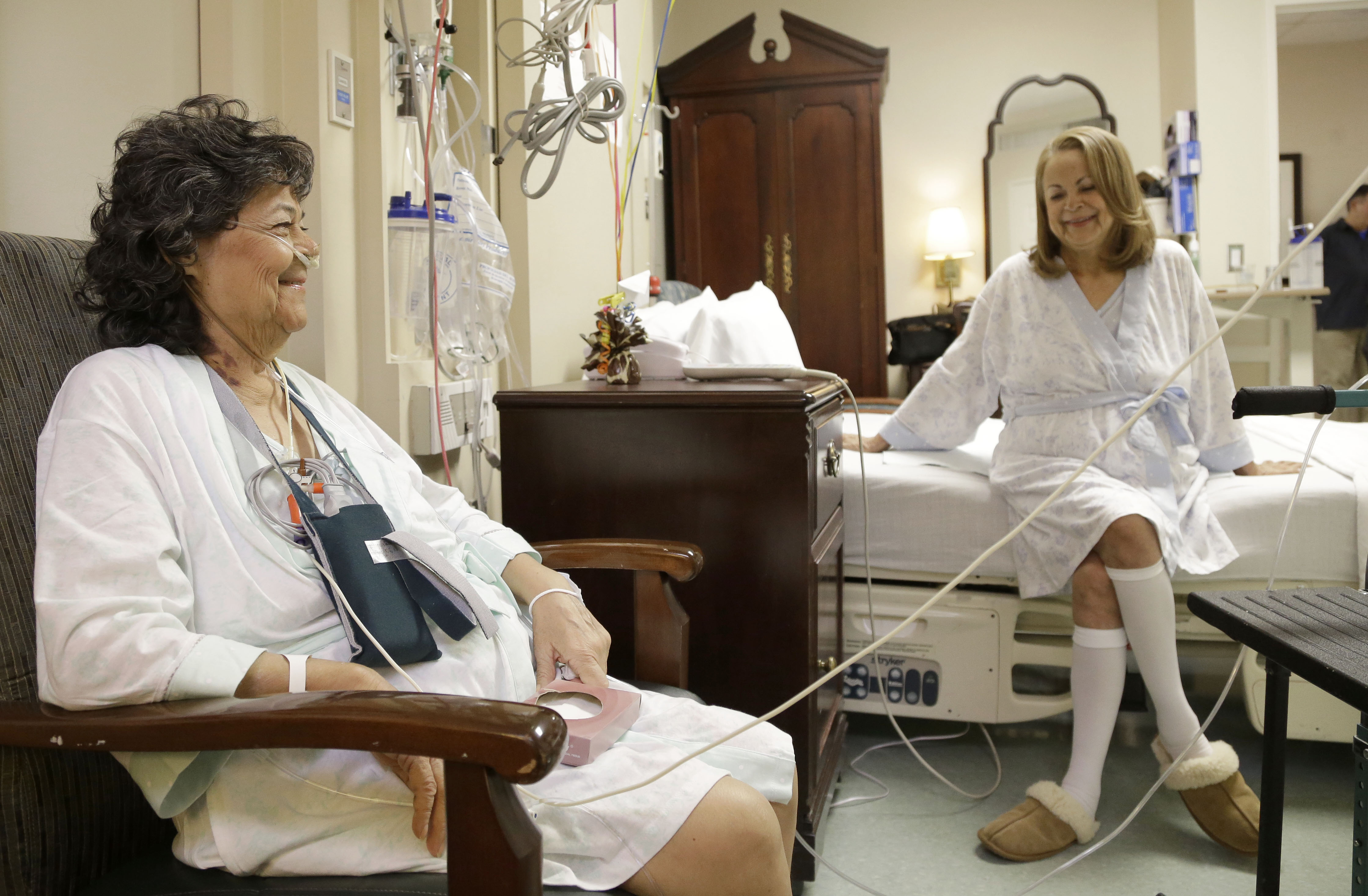 HOUSTON -- They quibble, joke and share knowing looks, finishing each other's thoughts and making snide comments - like many sisters. But a recent heated argument was unlike any other they've had, and it ended in a most surprising way.

For months, 71-year-old Irma Myers-Santana and her younger sister, Anna Williamson, 69, had been debating who more urgently needed a lung transplant, each wanting the other to go first. Earlier this month, though, the sisters ended up in the same operating room, each getting one lung from the same donor in what doctors at Houston Methodist Hospital say is a first for their facility.

"It's never happened. ... We've transplanted siblings before, but years apart," said Dr. Scott Scheinin, who did Myers-Santana's transplant. "It's a little bit of serendipity."

The sisters both became ill about 10 years ago with idiopathic pulmonary fibrosis, a little-understood scarring of the lungs that often requires a transplant and kills more people than breast cancer every year, said Scheinin.

Doctors, assisted by a computer program, look at blood type, height and severity of illness to match a donor and a transplant patient. The likelihood that Myers-Santana and Williamson would meet all three criteria at the same time was small, Scheinin said.

The sisters' situation was further complicated because they insisted on a "bloodless transplant." They are Jehovah's Witnesses and do not believe in receiving blood transfusions. They live in California, but Houston Memorial is the only hospital in the country that does such transplants.

"The irony of this whole thing is that we're sisters, we're both Jehovah's Witnesses, we have the same blood type and we got (the lungs) from the same donor," Williamson said, her eyes tearing up as she sat next to her sister, able for the first time in years to complete a sentence without coughing.

"It's a miracle to have all those things lined up like that," Williamson said.

Until the transplant, Williamson coughed all day and had to be attached to an oxygen tank constantly. About a year ago, her doctor told her she needed a transplant.

So, Williamson and her husband headed down to Houston 10 months ago. Within six months, Myers-Santana, who had a sudden, violent decline in her health and could barely breathe, joined Williamson, hoping she, too, would be a viable candidate for that type of transplant.

Then the waiting began, with the sisters housed just 10 doors apart in a Houston RV park. On a few occasions, each woman was offered a lung, but they bickered over who should take it.

"If we hadn't had the transplant when we did, she would be dead right now, dead," Williamson said adamantly, her sister sitting beside her in the hospital room.

Myers-Santana agrees with that, yet believed Williamson needed to have the first transplant.

"Her coughing just hurt to my core. You can't help someone that coughs like that," Myers-Santana said. "It's so hard to watch, and so I felt she needed it more than I did.

"I can live with a cough, but she can't live without oxygen, so I win," Myers-Santana shot back, smiling at her sister.

In the end, though, the individual lungs weren't a match.

Now, less than two weeks after the surgery, Williamson has the right lung and Myers-Santana has the left. They have on makeup, their hair is done, and they joke with their doctors - extending an invitation to Santa Barbara for free manicures and pedicures at Williamson's salon. Their husbands and children linger in the background. Colorful balloons wishing them well float above.

They can talk, joke and laugh without an oxygen tank.

And they can breathe easy.