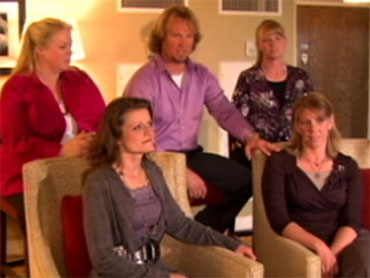 Last Sunday, "Sister Wives" premiered on TLC and almost immediately after, the Brown family of Lehi, Utah, learned they were under investigation for the very lifestyle they allowed reality show cameras to film.

In promotions for the show, Kody Brown admitted, "I'm a polygamist, but we're not the polygamists you think you know."

In the episode one of the wives remarked, "Some people think how do you feel when he's off with another woman and you know they're having sex? Well gosh darn it, they better."

However, by allowing reality cameras into their home, the Browns may have allowed real trouble into their lives that may end up costing them their freedom.

Utah police have now launched an investigation to determine if the Mormon family is breaking the law against multiple marriages. Police say the investigation was brought on by the publicity surrounding the show.

But the family says that freedom of religion should allow them to continue their way of life.

The HBO series "Big Love" turned the spotlight back on polygamy, a practice that was banned by the Mormon Church in 1890.

In 2008, the issue grabbed real headlines when a polygamist compound run by convicted sex offender Warren Jeffs was raided and more than 400 children removed.

Kody Brown contends, "We're not trying to promote this lifestyle, this is kind of the thing that I would actually say, 'Hey buddies, don't try this at home.'"

The Brown family says they aren't surprised by the added scrutiny, releasing a statement that says, "When we decided to do the show, we knew there would be risks. But for the sake of our family, and most importantly, our kids, we felt it was a risk worth taking."

But how much will that risk cost?

Clemens said on "The Early Show," though rarely prosecuted, bigamy remains a third-degree felony in Utah. So, once the police complete their investigation, the evidence will be forward to the Utah County Attorney's Office for review.

On "The Early Show," co-anchor Maggie Rodriguez asked CBS News Legal Analyst Lisa Bloom, "This seems to be pretty cut and dry. Polygamy is illegal and they are flaunting they are polygamists. Do you think if it moves forward they will have a hard time proving this is a crime?"

Bloom replied, "I don't know what they were thinking doing a reality show with cameras clearly a felony under Utah law, a person who knows they have a husband or wife cannot take another spouse or co-habit with someone else in a marriage-like relationship. Here they are saying we have a polygamist lifestyle and all live together, four wives and one husband, clearly in violation of Utah law."

Bloom added prosecutors rarely prosecute this kind of thing unless there is child abuse or statutory rape in a polygamist marriage.

But, Bloom added, "You can't simply flaunt what you're doing and sort of thumb your nose at law enforcement and expect to get away with it. I mean, here is hard cold evidence by way of all of the videotapes of the reality shows. I don't think law enforcement can turn their backs when the evidence is this clear."

If convicted, the family could face zero to five years in prison and up to a $50,000 fine.

Bloom said, "You know, they say this is a risk they thought was worth taking. Really? I wonder if they are re-evaluating that this morning."
As for the Browns' children, if their parents are convicted and incarcerated, the children will become wards of the state and would go into foster care."

She added, "I have to say, I don't expect long prison terms if they are convicted this a case like this, assuming they have no criminal record, they would probably get the low end, a fine, a warning, that kind of thing. I think law enforcement is trying to make an example of them, and simply say 'You can't violate the law on television and expect to get away with it.'"