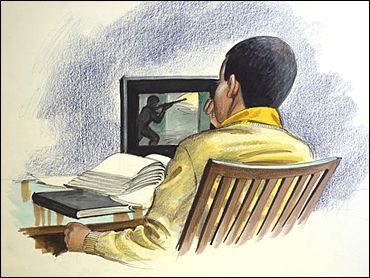 Sniper suspect Lee Boyd Malvo was so brainwashed by mastermind John Allen Muhammad that he could no longer tell right from wrong when an FBI analyst was killed outside a Home Depot during last year's shooting rampage, a psychologist testified on behalf of the defense.

Yet, in cross-examination so far, Dr. Dewey Cornell has acknowledged that Lee Malvo pulled a knife on a man and hunted and killed cats with a slingshot, reports Neil Augenstein of CBS radio affiliate WTOP. Prosecutor Robert Horan pointed out Malvo was showing these violent tendencies long before he ever met John Muhammad.

Malvo's attorneys are presenting an insanity defense to capital murder charges in the death of Linda Franklin, who was shot in the head on Oct. 14, 2002, as she and her husband loaded packages into their car.

Cornell, of the University of Virginia, testified Monday that he diagnosed Malvo with a dissociative disorder, a form of mental illness in which a person loses touch with reality and his own personality becomes distorted. Cornell gave no opinion on whether the disease rose to the level of insanity.

"He is, in my experience, a very unusual, rare case," he said.

Malvo told him he was the spotter — not the shooter — in all of the sniper shootings except the last one, Cornell said.

That contradicted a confession to police in which Malvo, laughing at times, said he was the triggerman in all of the shootings in metropolitan Washington that left 10 people dead and injured three. Jurors previously listened to the audiotape of that confession.

Horan expressed skepticism about the diagnosis, noting that a dissociative disorder from brainwashing is poorly defined in the medical literature.

Horan was expected to continue cross-examining Cornell when the trial resumed Tuesday.

Cornell interviewed Malvo in jail more than 20 times since February. Malvo initially defended Muhammad but after several months, Malvo said he realized that Muhammad had manipulated him, Cornell said.

"He realized he was an expendable person" to Muhammad, Cornell said, recalling that Malvo wondered, "If I was doing right, why did God let it stop?"

Cornell said Malvo had been instructed to claim credit for the killings to spare Muhammad.

Muhammad spent months preparing Malvo for a mission by controlling Malvo's diet and exercise, telling him that blacks were oppressed by the white government, teaching him to fire weapons and isolating him from family and friends, Cornell said.

There was a lot of mystery about what Malvo was being trained to do, Cornell said, but it was clear that Muhammad wanted to regain custody of his three children, who were living with Muhammad's ex-wife in the Washington, D.C., suburbs, and that Muhammad wanted money from the U.S. government to fund his vision of a new Utopian society.

Then, while visiting Muhammad's family in Louisiana in August 2002, a couple of months before the shooting spree, Malvo was finally told "that they were going to carry out a sniper plan to start shooting people, one after another," Cornell said.

That left Malvo in turmoil, to the point that he considered suicide, Cornell said. Malvo had misgivings about the plan, but he also felt an obligation toward Muhammad, whom he idolized, Cornell said. Malvo, a Jamaican native, told the psychologist that he had hoped Muhammad would adopt him so he could become an American citizen, go to college and become a pilot.

By the time Malvo had been fully subjected to Muhammad's indoctrination, "the effects were he believed what he was doing was right and that John Muhammad was a chosen person of Allah."

Cornell also testified about Malvo's intense interest in the film "The Matrix," which Malvo watched more than 100 times — including just before Franklin's shooting.

Defense lawyers played a brief clip from the movie, in which a character played by Keanu Reeves guns down numerous guards in a building lobby. Jurors also watched clips of several bloody sniper video games that Malvo had played.

Cornell said the film seemed to represent how Malvo viewed his situation, with a hero chosen by a black father figure to lead a revolution against "an evil government" that oppressed people.