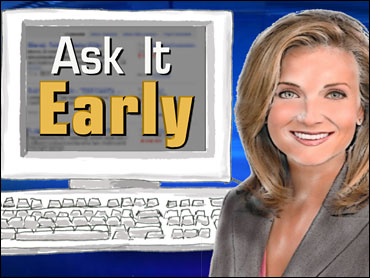 That was among the questions answered Thursday by Early Show consumer correspondent Susan Koeppen in the latest installment in her series, "Ask It Early."

Viewers send Susan videos of themselves posing the questions, and she picks some to answer on the broadcast.

You see signs at gas stations that say no cell phones.

Here's the deal: Cell phone batteries can explode, which would be a real danger if that happens while you're pumping gas.

What you need to be concerned about is static electricity. If you are pumping gas, and walk away from the pump, and say, get back into your car, you can build up static electricity, and when you touch the nozzle again, you can actually ignite the vapors.

There aren't any verifiable incidents of a cell phone causing a fire at a gas station; a gas station is a "class one" area. That means there are explosive vapors (not fumes). Under National Fire Protection Association rules, you're not supposed to use electronic materials at gas pumps. Fire codes say you can't use a cell phone there.

Do tires have an expiration date?

So, the big question: How can you tell how old your tire is? Every tire will have a DOT number -- the only part of it that you care about is the last four digits. Say that number is 0301. That means the tire was made in the third week of 2001. If the DOT number only has three digits, it means it was made in the '80s or '90s.

You should also replace your spare tire, even if you've never used it.

Yes, but only if it has never been involved in a crash. Product safety experts and car seat manufacturers say you shouldn't use a car seat more than six-years-old. All car seats are required to have a serial number and a manufacture date. If you can't find a date, or you're not sure, just call the company and read off the serial number.

Don't donate an old car seat if it's older than six. And if you throw a car seat away, make sure you take it apart so someone can't find it in the trash and grab it and use it.