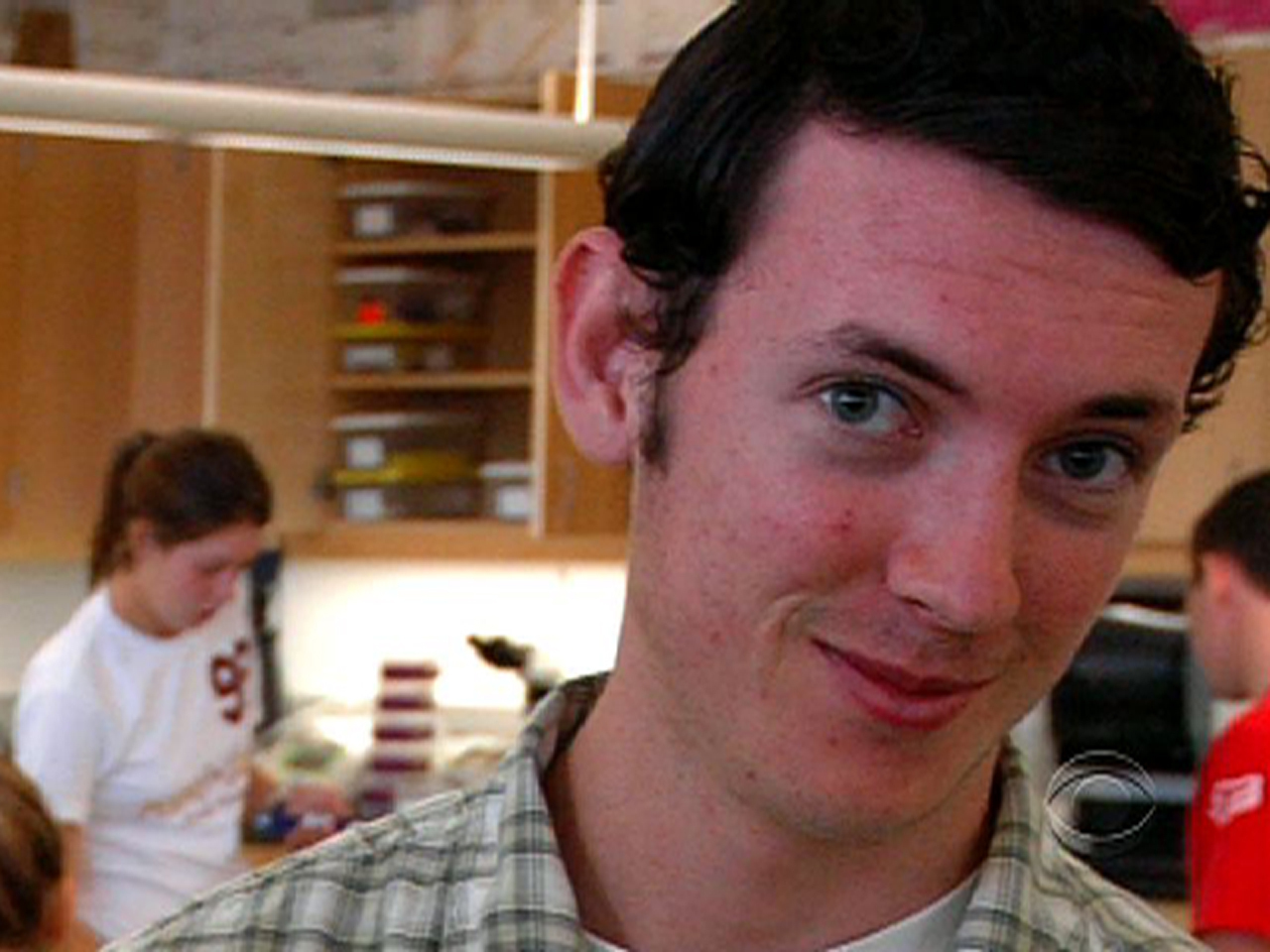 (AP) AURORA, Colo. - Shooting suspect James Holmes applied to join a Colorado gun range last month but never became a member because of his behavior and a "bizarre" message on his voice mail greeting, the range's owner said Sunday.

Holmes, 24, emailed an application to join the Lead Valley Range in Byers on June 25 in which he said he was not a user of illegal drugs or a convicted felon, said owner Glenn Rotkovich.

But when Rotkovich called to invite him to a mandatory orientation the following week, he said he heard Holmes' voice mail greeting that was "bizarre - guttural, freakish at best."

It identified the number as belonging to "James," so Rotkovich said he left a message.

He left two other messages but eventually told his staff to watch out for Holmes at the July 1 orientation and not to accept him into the club, Rotkovich said. His comments were first reported by Fox News.

Holmes is being held without bond on suspicion of multiple counts of first-degree murder after a shooting rampage minutes into a premiere of the new Batman film "The Dark Knight Rises" early Friday that left 12 people dead and 58 wounded. He is scheduled for an initial hearing Monday and has been assigned a public defender.

President Barack Obama left Washington for Colorado on Sunday to visit with the families of victims. The city of Aurora planned a vigil to remember the dead and wounded in the shooting later in the evening.

The gunman's semiautomatic assault rifle jammed during the attack at the Aurora movie theater, forcing him to switch to another gun with less firepower, a federal law enforcement official told The Associated Press. That malfunction and weapons switch during the shooting rampage might have saved some lives.

As the investigation into the massacre continued Sunday, the University of Colorado said it was looking into whether Holmes used his position as a graduate student to order materials in the potentially deadly booby traps that police said they found in his apartment.

Holmes got deliveries over four months to his home and school, authorities have said. The university is looking into what was received at the school to assist police with their investigation, said spokeswoman Jacque Montgomery.

The suspect was described as a budding scientist, brimming with potential, who pursued a graduate program even as he planned the attack with "calculation and deliberation," police said.

Holmes' apartment was booby trapped with jars of liquids, explosives and chemicals that could have killed "whoever entered it," Aurora Police Chief Dan Oates said, noting it would have likely been one of his officers.

Inside the apartment, bomb technicians neutralized a "hypergolic mixture" and an improvised explosive device containing an unknown substance, said James Yacone, an FBI special agent. There also were containers of accelerants, creating "an extremely dangerous environment," he said.

Oates said on CBS television's "Face the Nation" that he had never seen a booby trap as elaborate as what was found in the apartment.

By late Saturday afternoon, all hazards had been removed from the apartment and residents in surrounding buildings were allowed to return home, police said.

The exception was Holmes' apartment building, where authorities were still collecting evidence. Authorities covered the windows of Holmes' apartment with black plastic to prevent anyone from seeing in. Before they did, a man in an Alcohol, Tobacco, Firearms agent T-shirt could be seen measuring a poster on a closet that advertised a DVD called "Soldiers of Misfortune." The poster showed several figures in various positions playing paintball, some wearing masks.

Police left the apartment building carrying a laptop computer and a hard drive about 8 p.m. Saturday.

Congregations across Colorado prayed for the shooting victims and their relatives. Churches sent out social-media appeals for neighbors who wanted to join in remembrance. Elderly churchgoers at an aging Presbyterian church within walking distance near Holmes' apartment joined in prayer, though none had ever met him.

Among the dead was a 6-year-old girl and a man who died on his 27th birthday and a day before his wedding anniversary. Families grieved and waited at hospitals, which reported at least seven people still in critical condition as of Sunday.

While authorities continued to refuse to discuss a possible motive for one of the deadliest mass shootings in recent U.S. history, details about Holmes' background as a student and would-be scientist trickled out.

He had recently withdrawn from the competitive graduate program in neuroscience at the University of Colorado Denver, where he was one of six pre-thesis Ph.D. students at its Neuroscience Program to be funded by a prestigious grant from the National Institutes of Health. The program of 35 students is dedicated to training outstanding neuroscientists and academicians who will make significant contributions to neurobiology, the university said in a statement.

In the first year of the five- to seven-year program, students take classes and complete three, three-month research rotations in the labs of different professors.

Professors who worked with him either did not return calls or declined to comment, saying police and university officials had told them not to speak to the media.

At one point in the year, Holmes was engaged in research about RNA and was to present a paper May 8 about RNA Biomarkers, according to a class schedule. It was unclear if he presented the paper.

Holmes recently took an intense, three-part oral exam that marks the end of the first year. Those who do well continue with their studies and shift to full-time research, while those who don't do well meet with advisers and discuss their options, including retaking the exam.

University officials would not say if he passed, citing privacy concerns.

The university said Holmes gave no reason for his withdrawal, a decision he made in June.

Individuals who commit acts of mass violence often have suffered some kind of loss and aren't able to bounce back from it, said Barry Spodak, a behavioral threat assessment consultant who has worked with the Secret Service and the U.S. Marshals Service.

"Individuals who carry out acts like this of mass violence tend to perceive themselves to have suffered significant losses or failures and the people around them have generally been worried about their ability to deal with it," Spodak said.

Holmes was not allowed access to the institution after his withdrawal, which was "standard operating procedure" because he was no longer affiliated with the school, Montgomery said. Holmes had no contact with university police, she said.

In a resume posted on the job search Website Monster.com, Holmes listed himself as an "aspiring scientist" and said he was looking for a job as a laboratory technician.

The resume, first obtained in Holmes' home state of California by The Press-Enterprise in Riverside, paints a picture of a brilliant young man brimming with potential: He worked as a summer intern at the Salk Institute for Biological Studies in La Jolla in 2006 and mapped the neurons of Zebra finches and studied the flight muscles of hummingbirds while an undergraduate at the University of California, Riverside.

He also worked as a cabin counselor to underprivileged children at a summer camp in Los Angeles in 2008. In a statement, Camp Max Straus confirmed Holmes had worked there for eight weeks. The camp provided no other details about Holmes but said such counselors are generally responsible for the care and guidance of roughly 10 children.

Ritchie Duong, a friend who has known Holmes for more than a decade, told the Los Angeles Times that in high school Holmes liked to play cards and video games. They both attended undergraduate school at the University of California, Riverside, where they saw each other once a week to watch the TV show "Lost."

Duong last saw Holmes in December when they met for dinner in Los Angeles and saw a movie together. His friend seemed fine, he told the newspaper.

Academics came easily to Holmes both at high school and at the UC Riverside, Duong said.

"I had one college class with him, and he didn't even have to take notes or anything. He would just show up to class, sit there, and around test time he would always get an 'A,'" said Duong, 24.

Holmes was being held in solitary confinement for his protection at a Denver-area county detention facility.

During the attack early Friday, Holmes set off gas canisters and used the military-style semiautomatic rifle, a shotgun and a pistol to open fire on the unsuspecting theater-goers, Oates said. Holmes had bought the weapons at local gun stores in the past two months. He recently purchased 6,000 rounds of ammunition over the Internet, the chief said.

The gun that jammed had a high-capacity ammunition magazine, according to the federal law enforcement official who spoke to The Associated Press on condition of anonymity in order to discuss the investigation. Police have said that a 100-round drum magazine was recovered at the scene and that such a device would be able to fire 50 to 60 rounds a minute.

Holmes also bought an urban assault vest, two magazine holders and a knife for just over $300 on July 2 from an online supplier of tactical gear for police and military personnel, according to the company. Chad Weinman, CEO of TacticalGear.com, said his company processes thousands of orders each day, and there was nothing unusual in the one that Holmes placed.

The Batman movie, the last in the trilogy starring Christian Bale, opened worldwide Friday with midnight showings in the U.S. "The Dark Knight Rises" earned $30.6 million in the midnight screenings, and, according to industry estimates, roughly $75 million on that day as a whole. That put it on track for a weekend total of $160 million.

That amount would surpass the $158.4 million debut of "The Dark Knight" in 2008 and give "Dark Knight Rises" the third-highest domestic weekend opening ever after the 3-D films "The Avengers" with $207.4 million and "Harry Potter and the Deathly Hallows - Part 2" with $169.2 million.

The shooting was the worst in the U.S. since the Nov. 5, 2009, attack at Fort Hood, Texas. An Army psychiatrist was charged with killing 13 soldiers and civilians and wounding more than two dozen others.

Across the street from the movie theater, a man who placed 15 crosses near Columbine High School after a 1999 massacre there has returned to Colorado with 12 crosses for the victims of Friday's shooting.