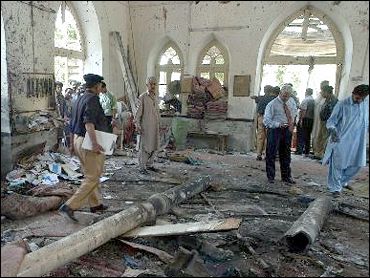 A powerful bomb exploded at a Shiite Muslim mosque packed with worshippers in the southern port city of Karachi on Friday, killing at least 14 people and wounding scores of others, hospital officials said.

The attack occurred shortly after 1 p.m. at a mosque inside a government-run religious school, shattering windows and pocking the walls with shrapnel and splattered blood. Bits of flesh and pools of blood lay all around as rescue workers tended to the wounded.

The school, which houses students aged 4-18, has separate mosques for Sunni and Shiite Muslim worshippers. Witnesses said the school had been let out early, as it normally does on Fridays. Most of the victims were adults who came to the mosque for prayers.

Sadir Durrani, a police explosives expert at the site, said he had found no timing or radio devices, indicating the blast may have been caused by a suicide bomber. But he said that more investigation was necessary.

Some reports said the explosion was a suicide bombing, said the BBC, but other witnesses said a man left a package among the rows of worshippers shortly before the blast.

One of the men injured in the blast described the devastation.

"I was inside the mosque for Friday prayers when a bomb exploded with a huge bang," Kalb e-Abbas, 23, told The Associated Press. "Something hit my arm, and I saw blood all over my body."

E-Abbas said he could hear the cries of the injured people around him before stumbling out of the building.

Aftab Sheikh, a senior politician responsible for law and order in Sindh province, where Karachi is located, blamed anti-state elements for the blast, but he would not elaborate.

Sheikh said "today's bomb attack was carried out by those people who were behind other terrorist attacks in Karachi."

"I condemn this attack, it was a barbaric act," he said.

Rescue officials piled blood-stained carpets outside the shattered mosque. Television footage from inside the nearby Karachi Civil hospital showed victims lying on the floor, bleeding and dazed, as doctors and nurses hurried between them.

Muslim clerics appealed for blood from mosque loudspeakers throughout the city.

Karachi, Pakistan's largest city and its business hub, has been hit by frequent acts of terrorism and sectarian violence. Police have been on alert in Karachi since April, when they found weapons and explosives in a raid on a building. It was not clear, however, if the mosque attack was linked to that weapons find.

About 80 percent of Pakistan's 150 million people are Sunni, and the rest Shiite. Most live together in peace, but radical groups on both sides are responsible for frequent deadly attacks.

In March, Sunni radicals attacked a procession in the southwestern city of Quetta, killing more than 40 people and wounding 150. Another bomb attack in Quetta injured two people on Friday, a day before Prime Minister Zafarullah Khan Jamali was scheduled to inaugurate an international investment conference at a nearby hotel.

Anger soared after the Karachi attack, with a mob of residents hurling abuse at police and rescue officials, apparently enraged by their inability to stop the violence.

Mirza Yousuf Hussein, a local Shiite leader, claimed terrorists based in a tribal region near the border with Afghanistan were behind the latest blast, although he offered no evidence to back up his claim. He blamed the government for giving amnesty to militants there after a military operation in March.

"Instead of giving them amnesty and relief they should be taken to task, otherwise the security agencies should be ready for such incidents elsewhere," Hussein said. "The government knows who is behind this gory act."