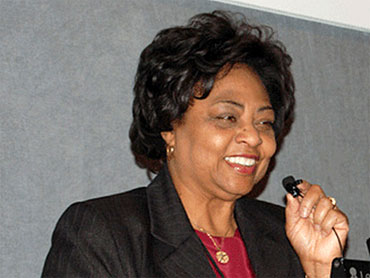 Former Agriculture Department official Shirley Sherrod said Thursday she wants to discuss racial issues with President Obama, who's "not someone who has experienced some of the things I've experienced in life."

But she also said on morning news shows she feels there is no need for Mr. Obama to apologize for her wretched week, which started with a conservative blogger posting controversial remarks she made, and led to her ouster as an Agriculture Department official and then, ultimately, apologies from both the White House and Agriculture Secretary Tom Vilsack.

The furor centered on a videotape on the Internet of Sherrod's remarks, recalling her reluctance 24 years ago to help a white farmer seeking government assistance. Blogger Andrew Breitbart said he posted it to illustrate that racism exists in the NAACP, an argument he was using to counter allegations by the civil rights organization of racism in the tea party.

"He was willing to destroy me ... in order to try to destroy the NAACP," Sherrod said Thursday of Breitbart, saying she still hasn't heard an apology from him. She had argued from the start that her talk was about racial moderation and reconciliation, and that the Internet posting took her speech out of context.

Sherrod told CBS' "The Early Show" she would consider legal action against Breitbart.

"He had to know what he was doing. I think he -- I'm certain he didn't think the other side of the story would come out, but he knew he was misrepresenting the facts," she said.

Sherrod also reiterated she isn't certain she'll return to the Agriculture Department, even though the Obama administration acknowledged she was done a disservice by being forced out, invited out, and then rendered cross-government apologies.

Speaking on NBC's "Today," Sherrod said she would be inclined to say no at this point, but hasn't seen an official offer.

"So before I say no totally, I would like to look at that to weigh in," she said.

The new position would involve improving race relations at the USDA, which Sherrod have been problematic in the department.

"I would not like to be the one person that this country is looking at to solve all of the problems of discrimination within the Department of Agriculture," she told "The Early Show." "They have been going on for years in terms of black farmers and now Hispanic farmers, Native American farmers, women farmers. There are many, many, many layers of issues there. And I don't know that the department is ready to deal with them."

Mr. Obama said nothing publicly about the developments while administration officials tried to both show his concern and to distance him from the original ouster.

Sherrod: I'd Like to Talk Race with Obama
Sherrod: I'd Consider Legal Action against Breitbart
Sherrod: Administration Too Sensitive to the Right
Sherrod Story Shows Ugly Side of 24-Hour News
Washington Unplugged: Analysis, Reaction
Vilsack: I Will Have to Live With My Mistake
Breitbart: Video Was Meant to Target the NAACP
Case Exposes Raw Wounds About Race
More Coverage in Hotsheet Blog

Sherrod said of Mr. Obama: "I'd like to help him see some of the things that he could do in the future."

"I really regret what they did. But as I said before, he's my president," Sherrod said. "When you get it down to where the rubber meets the road, I think you need to understand a little more what life is like. I'd love to talk to him, though, or people in his administration ... to help them understand."

"I can't say that the president is fully behind me. I would hope that he is," she added. "I would love to talk to him."

In offering a public apology Wednesday, Vilsack told reporters: "This is a good woman. She's been through hell. ... I could have done and should have done a better job." He addressed the media after speaking to her by phone.

And a new job offer was put on the table as the administration sought to keep the embarrassing events of this week from being more than a three-day distraction.

But will Sherrod want to return to the Agriculture Department?

"They did make an offer. I just told him I need to think about it," said Sherrod in a telephone interview with The Associated Press.

How much involvement was there from the White House? Was there White House pressure last Monday to push Sherrod out, when the snippet of remarks incorrectly suggested a racist bias?

"No," insisted Vilsack. He said he made the decision without knowing all the facts and regretted it. "I am accepting the responsibility with deep regret," Vilsack told a news conference.

White House Press Secretary Robert Gibbs also insisted the decision was one made at the Agriculture Department and he denied White House pressure for Sherrod's immediate resignation. He apologized to Sherrod "for the entire administration."

The president had been briefed, Gibbs said, and "he talked about the fact that a disservice had been done, an injustice had happened and, because the facts had changed, a review of the decision based on those facts should be taken."