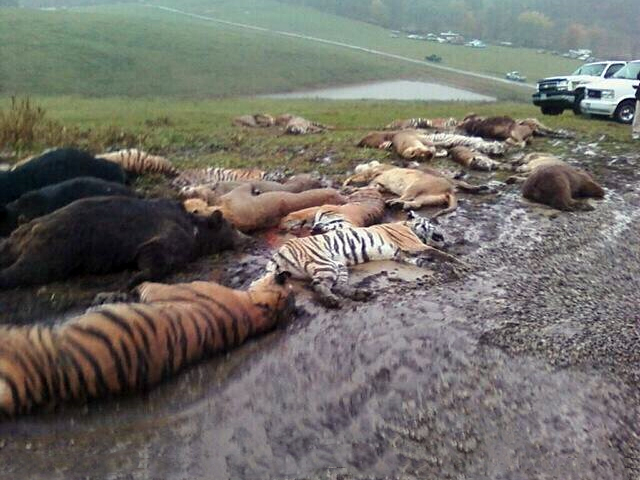 ZANESVILLE, Ohio - Amid expressions of horror and revulsion at the killing of dozens of wild animals in Ohio — and photographs of their bloody carcasses — animal rights advocates agreed there was little local authorities could have done to save the dangerous creatures once they began roaming the countryside after their owner released them before taking his own life.

Thompson died of a self-inflicted gunshot wound and also had a bite wound on the head that appeared to have come from a large cat, such as a Bengal tiger, county Sheriff Matt Lutz said Thursday morning.

It appeared the bite occurred quickly after Thompson shot himself and that his body had been dragged a short distance, Lutz said.

"What a tragedy," said veterinarian Barb Wolfe, of The Wilds animal preserve sponsored by the Columbus Zoo. "We knew that ... there were so many dangerous animals at this place that eventually something bad would happen, but I don't think anybody really knew it would be this bad."

The sheriff would not speculate why Thompson took his own life. "We don't know what he was thinking," said Lutz, who added that finding out the reasons why wasn't the focus on his investigation.

Neighbors made it clear that Thompson loved the animals and would not have wanted them hurt.

"He liked animals more than he did people. He really did," said Fred Polk, whose farm is within sight of Thompson's home.

As the hunt winded down on Wednesday, a photo showing the remains of tigers, bears and lions lined up and scattered in an open field went viral provoking visceral reactions among viewers, some of whom expressed their anger and sadness on social networking sites.

Some local townspeople also were saddened by the deaths. At a nearby Moose Lodge, Bill Weiser said: "It's breaking my heart, them shooting those animals."

Authorities said the slain animals would be buried on Thompson's farm.

Will Travers, chief executive of the California-based Born Free USA animal welfare and wildlife conservation organization, said police had no choice but to take the action they did.

"It's a tragedy for these particular animals, for no fault of their own they've been shot, and I can see how difficult that decision was for the police," he said.

The sheriff said he spoke with Thompson's wife and that she was distraught over the loss of her husband and the animals.

"You have to understand these animals were like kids to her," Lutz said. "She probably spent more time with these animals than some parents do spend with their kids."

Six — three leopards, a grizzly bear and two monkeys — were captured and taken to the Columbus Zoo. "We are happy to report they all seem to be doing very well," zoo spokeswoman Patti Peters said in a statement Thursday.

A wolf was later found dead, leaving a monkey as the only animal possibly still unaccounted for in the mostly rural community of farms, widely spaced homes and wooded areas about 55 miles east of Columbus.

While the sheriff's office said early Thursday that the search for the monkey was still active, Lutz said the animal may no longer be a concern. It's highly likely the monkey was killed by one of the big cats, Lutz said.

Officers were ordered to kill the animals instead of trying to bring them down with tranquilizers for fear that those hit with darts would escape in the darkness before they dropped and would later regain consciousness.

Veterinarian Wolfe had tried to save a tiger in a heavy bramble by using a tranquilizer dart, but the animal charged her then tried to flee. It had to be shot and killed by sheriff's deputies.

"I was about 15 feet from him and took a shot, and it didn't respond too much, and I thought we were OK, but within about 10 seconds he roared and started toward me," she said.

Sheriff's Deputy Jonathan Merry, among the first to respond on Tuesday, said he shot a number of animals, including a gray wolf and a black bear who charged him from 7 feet away. He said he's an animal lover and only took pride in knowing he was protecting the community.

"All these animals have the ability to take a human out in the length of a second," he said.

The Humane Society of the United States criticized Gov. John Kasich for allowing a statewide ban on the buying and selling of exotic pets to expire in April and called for an emergency rule to crack down on exotic animals until the state comes up with a permanent legal solution.

"Every month brings a new, bizarre, almost surreal incident involving privately-held, dangerous wild animals," Wayne Pacelle, president and chief executive of the Humane Society, said in a statement. "In recent years, Ohioans have died and suffered injuries. ... Owners of large, exotic animals are a menace to society, and it's time for the delaying on the rulemaking to end."

Activist group People for the Ethical Treatment of Animals also called for emergency regulations and pointed the finger at Gov. John Kasich, saying the incident should serve as his "wake-up call."

"Surely, after this latest incident, enough blood has been shed for the state to take action," the group said in a statement.

Ohio has some of the nation's weakest restrictions on exotic pets and among the highest number of injuries and deaths caused by them.

Born Free USA says it has tracked 1,500 attacks on humans or other animals, and escapes by exotic animals since 1990, with 86 being in Ohio. Travers said there's an urgent need for legislation that addresses the competency of Ohioans seeking to own exotic pets and owners' ability to provide for the animals' welfare as well as public safety.

Kasich spokesman Rob Nichols said Wednesday the governor had called on Lutz to commend the job he had done and to ask him to be part of the process of putting into law what the executive order failed to do.

"Clearly, we need tougher laws. We haven't had them in this state. Nobody's dealt with this, and we will. And we'll deal with it in a comprehensive way," Kasich said earlier in the day at a meeting of Dix Communications editors at which The Associated Press was present.

Thompson, 62, had had repeated run-ins with the law and his neighbors. Lutz said that the sheriff's office had received numerous complaints since 2004 about animals escaping onto neighbors' property. The sheriff's office also said that Thompson had been charged over the years with animal cruelty, animal neglect and allowing animals to roam.

The sheriff recalled being on the property once in the last three years to inspect the pens. "I never had a confrontational situation with Mr. Thompson," Lutz said.

Thompson had gotten out of federal prison just last month after serving a year for possessing unregistered guns.

He had rescued some of the animals at his preserve and purchased many others, said Columbus Zoo spokeswoman Patty Peters.

It was not immediately clear how Thompson managed to support the preserve and for what purpose it was operated, since it was not open to the public. But Thompson had appeared on the "Rachael Ray Show" in 2008 as an animal handler for a zoologist guest, said show spokeswoman Lauren Nowell.