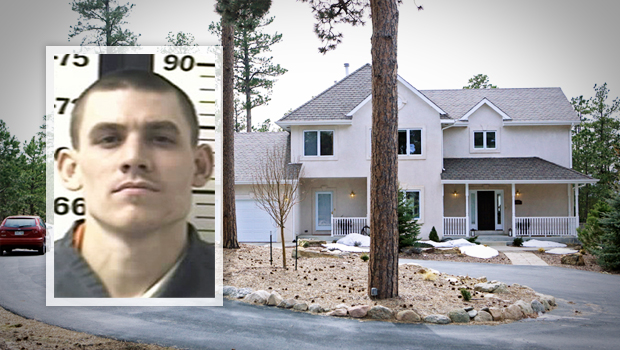 DECATUR, Texas Shell casings from a shootout with a white supremacist Colorado parolee in Texas are the same make and caliber as those found at the home of Colorado's prison chief after he was killed.

The information comes from an application to search the wrecked car of Evan Spencer Ebel, who was killed in Thursday's shootout with Texas law enforcement.

Authorities also say they found a Domino's pizza bag and a jacket or shirt in the car's trunk. Denver Police say Ebel is a suspect in Sunday's killing of pizza delivery man Nathan Leon.

Ebel fired at Texas authorities who tried to stop him Thursday. His car matched the description of the one that was spotted outside the home of Colorado Corrections director Tom Clements just before his death.

Ebel, 28, is a Colorado parolee with a long record of convictions since 2003 for various crimes including assaulting a prison guard in 2008. Denver police Friday said they were "confident" he was involved in the death of Leon, 27, the pizza man whose body was found Sunday.

Authorities also are trying to determine whether the black Cadillac Ebel drove was the same seen outside the home of Clements, the prison official, who was shot and killed when he answered the door Tuesday evening. Texas authorities spotted the car Thursday and gave chase after Ebel shot and wounded a deputy. They fatally shot him after he crashed into a semi and opened fire on his pursuers.

Wise County Sheriff David Walker in Texas spoke to CBS News correspondent Anna Werner about what the car could tell the authorities. "I think the vehicle will lead us to where he's been," he said. He also added that it is unknown why he was in Texas.

Colorado Bureau of Investigation Assistant Director Steve Johnson told Werner that until all questions are answered, security will be tightened for state officials. "This has shocked people and officials and rocked them to the core," he said. "The precautions that they're taking probably at this point are warranted."

Meanwhile, Kaufman, Texas police chief Chris Aulbaugh said Friday the FBI is checking to see if the January shooting death of Kaufman County Assistant District Attorney Mark Hasse is connected to Tuesday's killing of Clements. Hasse was killed about 100 miles away from where Ebel died.

Ebel, a parolee in the Denver metro area, was a member of a white-supremacist prison gang called the 211s, a.k.a. the Brotherhood of Aryan Alliance, according to KCNC. It was founded at Colorado's Denver County Jail by Benjamin Davis in 1995.

Ebel is not on the radar of the Southern Poverty Law Center, which tracks extremist groups, but the center rates the gang as one of the most vicious white supremacist groups operating in the nation's prisons, comparable to the Aryan Brotherhood of Texas. Founded in 1995 to protect white prisoners from attacks, it operates only in Colorado and has anywhere from between a couple hundred to 1,000 members, senior fellow Mark Potok said Friday.

The gang has grown into a sophisticated criminal enterprise where members are assigned military titles like "general" and extort money from fellow prisoners, regardless of race. Released members are expected to make money to support those still in prison, Potok said. He said members have to attack someone to get in and can only get out by dying.

In 2005, 32 members were indicted for racketeering and the gang's founder, Benjamin Davis, was sentenced to over 100 years in prison.

The killing of Clements, 58, shocked his quiet neighborhood in Monument, a town of rolling hills north of Colorado Springs, for its brutality: He answered the door of his home Tuesday evening and was gunned down. Authorities wouldn't say if they thought the attack was related to his job, and all Clements' recent public activities and cases were scrutinized.

The Texas car chase started when a sheriff's deputy in Montague County, James Boyd, tried to pull over the Cadillac around 11 a.m. Thursday, authorities there said. They wouldn't say exactly why he was stopped, but called it routine.

The driver opened fire on Boyd, wounding him, Sheriff Walker said at an afternoon news conference in Decatur. He then fled south before crashing into a semi as he tried to elude his pursuers.

After the crash, he got out of the vehicle, shooting at deputies and troopers who had joined the chase. He shot at Decatur Police Chief Rex Hoskins four times as the chief tried to set up a roadblock.

"He wasn't planning on being taken alive," Hoskins said.

Ebel was struck in the head. KTVT reports he was kept on life support for a short time for potential organ donation.

Boyd, the deputy who was shot, was wearing a bulletproof vest and was at a Fort Worth hospital, authorities said. Officials had said he wasn't seriously injured but later said his condition was unknown.

Legal records show Ebel was convicted of several crimes in Colorado dating back to 2003, including assaulting a prison guard in 2008. He apparently was paroled, but Colorado Department of Corrections spokeswoman Alison Morgan said she could not release information on prisoners because of the ongoing investigation into Clements' death.

Scott Robinson, a criminal defense attorney and media legal analyst, represented Ebel in 2003 and 2004. He said Ebel had been sentenced to a halfway house for a robbery charge in 2003 before he was accused in two additional robbery cases the following year that garnered prison sentences of three and eight years.

"I thought he was a young man who was redeemable, otherwise I wouldn't have taken the case," Robinson said, saying he didn't recall the details of the case.

Robinson said he knew Ebel before he got in trouble. He said Ebel was raised by a single father and had a younger sister who died in a car accident years ago.

Vicky Bankey said Ebel was in his teens when she lived across from him in suburban Denver until his father moved a couple of years ago. She remembers seeing Ebel once jump off the roof of his house. "He was a handful. I'd see him do some pretty crazy things," she said.

"He had a hair-trigger temper as a kid. But his dad was so nice," Bankey said.

Clements came to Colorado in 2011 after working three decades in the Missouri prison system. Missouri Department of Corrections spokeswoman Mandi Steele said Thursday the department was ready to help in the probe if asked.

The last public official killed in Colorado in the past 10 years was Sean May, a prosecutor in suburban Denver. An assailant killed May as he arrived home from work. Investigators examined May's court cases, but the case remains unsolved.