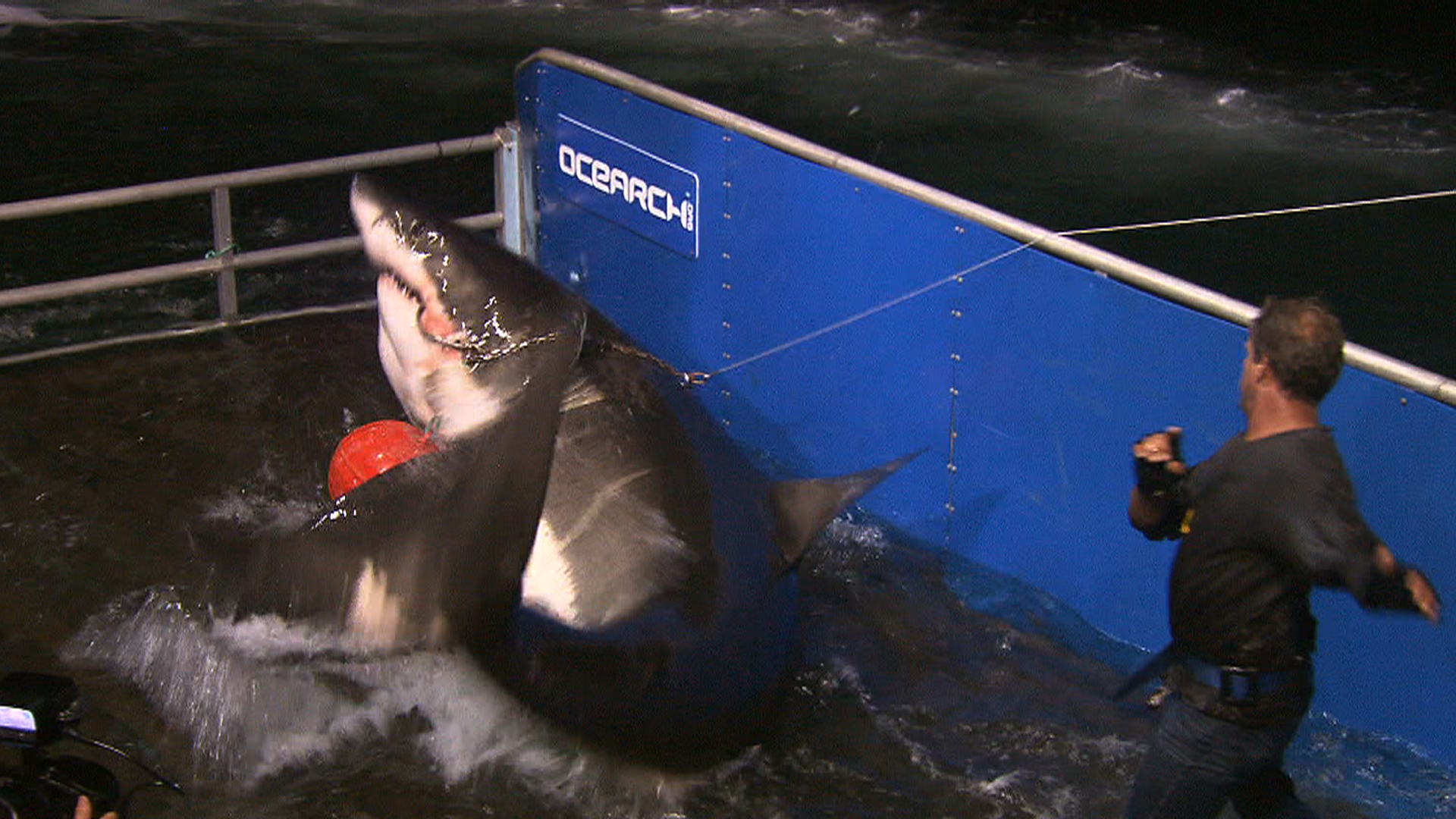 (CBS News) Last month, CBS News special correspondent, Jeff Glor, shared a look into the world of a group of fishermen and scientists as they attempted to tag white sharks with GPS trackers in order to reveal new information about their migration habits and breeding. The group, OCEARCH, conducts this work as part of a broader effort to to study and protect sharks.

For the first time ever in the North Atlantic, OCEARCH spot-tagged and released their first great white shark, named Genie, in September and OCEARCH founder, Chris Fischer and co-Captain, Brett McBride joined Glor and the "CBS This Morning" co-hosts on Tuesday to check in on the group's progress.

Since Glor's initial report, OCEARCH caught and released another great white shark, after affixing a satellite enabled tracking tag to the sharks' dorsal fin. Five day after catching Genie, a 15-foot, 2,000-pound shark, off the coast of Cape Cod, the OCEARCH team caught and spot-tagged an even bigger shark, a 3,500 pound female dubbed Mary Lee.

According to Chris Fischer, the group is using the information gleaned from the satellite tracking to determine "where they breed...where they feed...where they give birth" in order to "put policy in place to protect them and make sure they have a future." Fischer explained that the sharks mainly need protect from finning, a practice which kills up to 73 million sharks every year.

McBride explained the team's tactful maneuvering of Genie, saying the most important element is a sense of focus. "We're all just so focused on the health of the shark," he said.

And Fischer shared an update on the location of the sharks, as of Wednesday morning. "The big shocker is with Genie, she's off Nantucket...and Mary Lee, in just two weeks, has moved all the way down to North Carolina from Cape Cod. So, really surprising [to] the scientists [is] how far they're moving and how quickly."

Although OCEARCH does know yet why they are moving in these patterns, "the big key is to figure that out," Fischer said. "We don't even know how to effect policy to protect sharks, and there's a shark crisis in the ocean today, so we're trying to use this tagging and tracking to figure out where do they breed and where do they give birth to protect those vulnerable areas."

After the group has determined the answers to these questions, their goal is to "take it to politicians and get destructive gear types out of the nursery and the breeding areas," Fischer explained, before adding that they hope to ensure "a future for the sharks because they keep keep the system in balance. We must make sure there's a robust population in the future."

Responding to concerns that the tagging process might put undue stress on the sharks, Fischer said "our bloodwork and our accelerometer showed that they recovered quite quickly."

And as for the stress the expedition put on Jeff Glor, Fischer said "he hung in there for days and days. it was awesome," Fischer said of Glor joining the team on the trip.

Fischer reiterated his passion for OCEARCH's mission to "CTM" co-host Charlie Rose, explaining that great white sharks are "the lion of the ocean. They are the apex predator."

"If we remove them from the system," he said "the system will collapse...they're the balance keeper."

OCEARCH hopes to collect data quickly in order to reverse the fate of the millions of sharks that are killed annually for -- in Fischer's words -- "a bowl of soup."