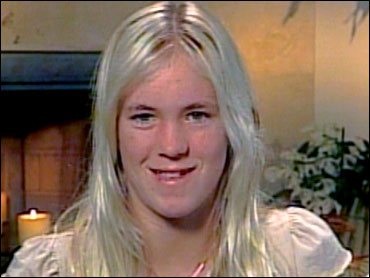 Even a shark attack couldn't stop Bethany Hamilton from pursuing her dreams. Just a few weeks after her arm was bitten off, she was back competing on her surfboard. Now she has found new mountains to conquer. Rick Sallinger from the CBS Denver station KCNC reports.

The 13-year-old has temporarily traded in her surfboard for a snowboard, the beaches of Hawaii for the slopes of Steamboat Springs, Colo.

"It's cool doing this, but I miss the water," she says.

Her never-give-up attitude has been quite an inspiration not just for her family. Since the shark attack, Bethany has received numerous letters from people who have been inspired by her.

Bethany says, "They didn't have any hope in living or something and after they saw me, they were, like, more happy, I guess."

If surfing with one arm is a challenge, fastening boots into snowboard bindings can be even tougher. But her deeply religious family believes what has happened has been for a purpose.

Wagner & I agreed on what to say: Captain

Her mother, Cheri Hamilton, says, "Actually, it seems like all different doors are opening now, and we're doing different things. I think it's going to be bigger and better."

Bethany says, "For me, I just look up to God. He gave me everything that I have, and I should be thankful I'm still alive."

Bethany still hopes to become a champion surfer. After Colorado, she'll be getting an artificial arm. Her road to recovery appears to be a smooth one.

In November, Deborah Norville, the anchor of "Inside Edition," interviewed the incredibly resilient teenager.

Norville says she was astonished by Hamilton's poise as she re-told her story. On Halloween, she was lying on her surfboard, taking a break after catching some early-morning waves, when the gray blur emerged near her left arm as it dangled in the Pacific.

The attack took place on Kauai's North Shore, and based on the teeth marks in a massive gash in her board, state wildlife experts estimated it was a tiger shark about 14 feet long. Hamilton says, "I saw, like, the grayness. I didn't really see it. I looked down after it went back down, and I knew my arm was gone. I didn't think twice about that. I saw all of the red water, and I just headed towards the shore. "

A competitive surfer, Hamilton had already secured sponsorships and was expected to go pro. But now that this has happened, her goals have a new challenge. To others who are facing similar adversity, she says, "If it's something bad, and you think it's bad, make sure that you keep a positive attitude or things won't be fun for you. And always try to look forward and not look back."

Asked if she has cried, she says, "I cried about four times or three times. I cried when my therapist came in, because he's a blind guy and that made me sad."

There is no doubt she is a remarkable kid. Her strength comes from her faith. Norville reports Hamilton comes from a faith-driven family. "She already believes the purpose in this accident has been realized because she's told me she's learned of two kids who've come to Christ through hearing about story. She had a big smile and said, 'So I know it's worth it.'"

In August, Hamilton won the Explorer Women's Division of the National Scholastic Surfing Association's Open and Explorer event on Kauai. In May, she won the Women's Division at the Local Motion-Ezekiel Surf Into Summer contest at Ala Moana on Oahu, beating out older surfers. "She is probably the best young surfer I have ever seen," said Bobo Bollin, who works at the Hanalei Surf Company, which sponsors a surf team that includes Hamilton. "She was going to be the women's world champion and I think she still will be."

Hamilton hopes to be fitted with prosthetics, allowing her to continue not only to surf but also to play the guitar.

Last fall, shortly after the shark attack, Hamilton told The Early Show co-anchor Hannah Storm, "I definitely want to get back to my same level and eventually get better. I want to do some more contests and I want to bring girls' surfing to a higher level. I just want to have a good time."