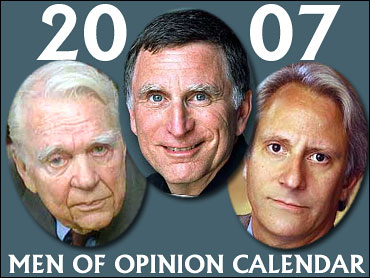 In recent years, there's been a new kind of sexy calendar — one showing people who usually don't take off their clothes in public posing naked or nearly naked. The calendars are then sold to raise money for charity. Often, the people posing are in heroic or sexy professions like athletes or firefighters. But not always. The latest calendar that's out there is called "Men Of Mortuaries."

Of course, the most famous example of these calendars didn't involve people in traditionally heroic or sexy professions, either. They even turned it into a movie called "Calendar Girls." It was based on a story in which women ranging in age from 45 to 65 posed tastefully in the nude and sold the calendars to raise money for charity.

These kinds of calendars create win-win situations: those who pose can say they are grinning and baring it for charity, and those who buy the calendars can say they're not buying them because of the sexy pictures, but because they want to contribute to a good cause.

The "Men of Mortuaries" calendar was the brainchild of mortician, Ken McKenzie. He wanted to raise money for KAMM Cares, a breast cancer charity. He also wanted to help change the image of morticians. He wanted to show the world that they're "not all Frankensteins." They're regular people who just happen to have a job that requires them to deal with dead bodies all day.

To round up morticians to pose for the calendar, McKenzie advertised in a trade journal. (Now, there's a magazine I can do without.) But morticians are used to looking so serious, that some problems came up during the photo shoot. Some of the undertakers looked too much like, well, undertakers. Two of them refused to crack a smile. And some of the guys just weren't as "buff" as McKenzie wanted them to be for the calendar.

But these were just minor setbacks. Remember what these guys do for a living. One of their jobs is to make dead people look good. So, changing the appearance of live folks must be just a, uh, walk in the cemetery for them. They didn't do it with makeup and whatever other secrets morticians use. This is the 21st century — the digital age, the age of Photoshop.

So, they digitally added some muscles here and there, and replaced the frowns with sexy smiles. You might think this was cheating, but nobody thought it was cheating in "The Godfather" when Don Corleone "asked" the undertaker to make sure that Sonny looked good after he was blasted with gunshots.

It might not turn you on, but some people will buy these calendars displaying good-looking, shirtless guys, lowering a casket into the ground, and not just because it's for a good cause.

London stock traders and some computer IT workers have recently put out sexy calendars. To some people, maybe a nude computer worker is sexier than a naked policeman or athlete because it's more like looking at the woman or man "next door."

So, I expect more and more of these "regular people, cheesecake/beefcake" calendars. Don't be surprised to see things like "Extreme Exterminators," "Accountants with Good Figures," and "Women Who Put You On Hold."

But if they ever ask me to pose with a group of opinion givers/columnists for a calendar, I won't do it. I'm a serious journalist, and I have to draw the line somewhere. I won't do it even if Andy Rooney himself is in the front row, holding a bowl of fruit in a strategic location.

Of course, if they hire that McKenzie guy and digitize the photo, I guess they could make me look pretty good. They could get rid of the gray hair, add some muscles where they belong, and maybe even knock off a few years. Come to think of it, they could probably make me look great! All right, I'd do it. But only for a good cause.

Lloyd Garver writes a weekly column for SportsLine.com. He has written for many television shows, ranging from "Sesame Street" to "Family Ties" to "Frasier." He has also read many books, some of them in hardcover, and owns a few calendars.