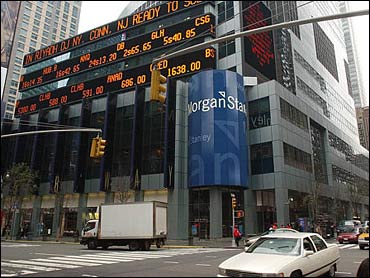 In its lawsuit, the EEOC alleged a pattern of discrimination that denied scores of women promotions and gave higher salaries to less productive men.

The CEO of Morgan Stanley and the chairperson of the EEOC, which brought the suit in 2001, had personally become involved in settlement talks over the weekend, Berman said.

He said the settlement would include $12 million for Allison Schieffelin, the former Morgan Stanley bond seller who was the lead plaintiff.

Morgan Stanley is to implement "far-reaching" measures — including agreeing to oversight by an outside monitor — to enhance the role of women in its work force. In addition, a retired federal judge is to oversee a $40 million claims fund for women alleging discrimination at the firm, Berman said. Also, $2 million will go to gender diversity programs.

"The court is not ruling upon the merits of any party's allegations," Berman said.

Schieffelin hugged her father and mother after the settlement was announced in Manhattan federal court. She said she would comment later.

Other high-profile bias complaints against brokerages have been settled out of court. Talks in the Morgan Stanley case had collapsed last year.

The EEOC had been expected to call about two dozen women to testify. Some told the EEOC that the firm withheld raises and desirable assignments from women who took maternity leave.

Schieffelin said Morgan Stanley condoned a hostile workplace where men made sexist comments and organized trips to topless bars and strip clubs. Women were excluded from the outings, which sometimes included her clients, Schieffelin said. She eventually filed a complaint with the EEOC, which sued the firm.

Schieffelin, who made $1.35 million in 1998, was fired in 2000 after claiming she was passed over for a promotion to managing director.

Morgan Stanley contended Schieffelin was fired after initiating "an abusive confrontation" with her boss, a woman who got the job over which Schieffelin sued. Company officials also deny any pattern of gender bias, saying "mutual respect and nondiscrimination are core values here."

Shares in Morgan Stanley were up 38 cents at $50.38 on the New York Stock Exchange.