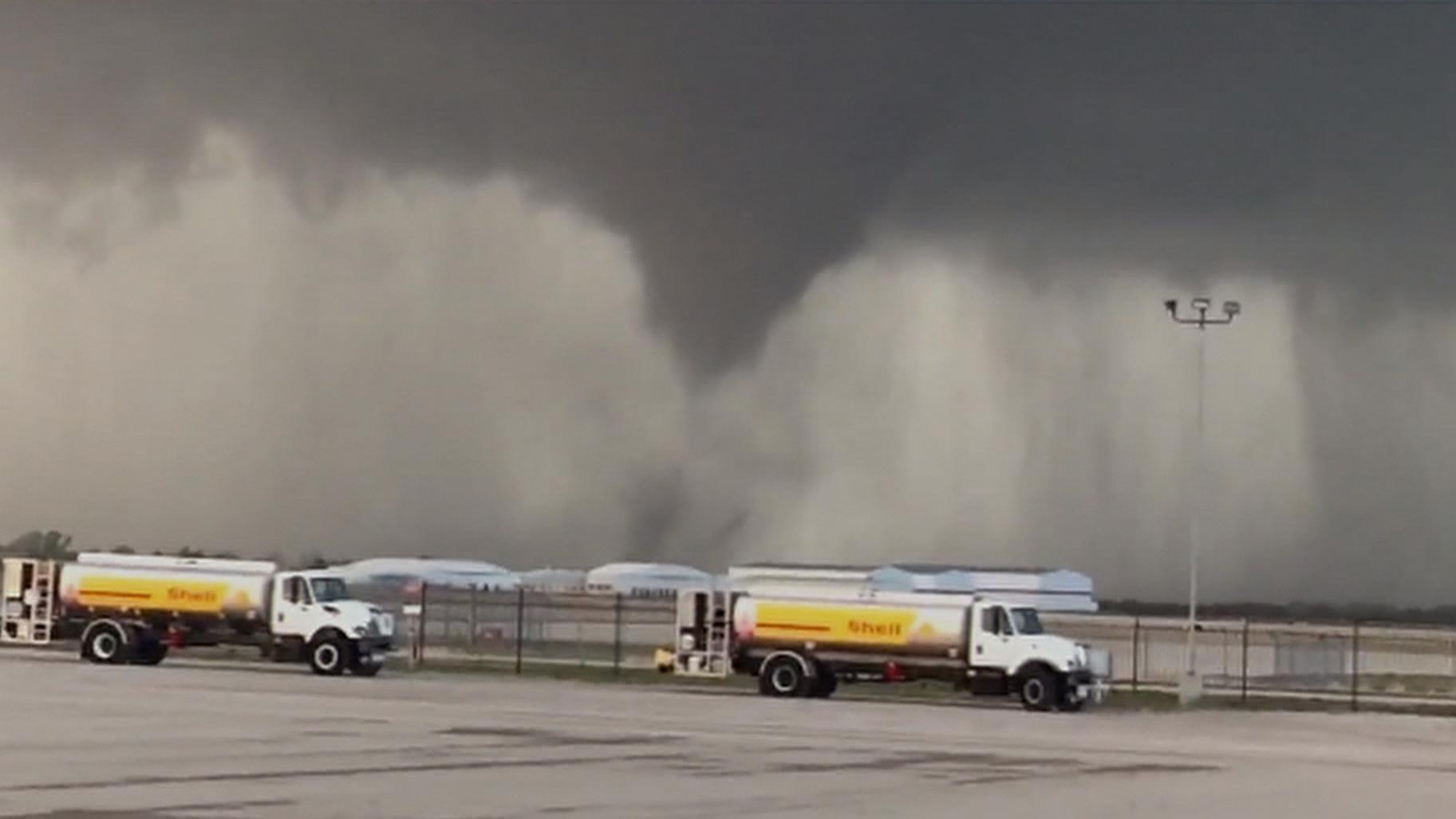 CBS Tulsa affiliate KOTV reported multiple tornadoes were spotted in Tulsa County, causing damage to buildings and trees. The station's helicopter captured images of a funnel cloud near Owasso and transformers sparking as the weather system passed over power lines.

National Weather Service meteorologist Amy Jankowski said a tornado touched down and lifted up numerous times as it swept through the northern Tulsa and Owasso areas.

The City of Tulsa said in a statement that several roads were closed and police and fire crews were canvassing the city. The Streets and Water Departments are assisting with road barricades and debris removal.

Jankowski said the weather service received reports of lofted debris, trees down and some structural damage.

A man who huddled in his above-ground safe room with his family described the sound of the twister ripping off his home's roof as surreal.

One family told KOTV they were lucky not to have been hurt after a tree fell on their vehicle. Another family found a street sign in their yard that was uprooted from a mile away.

Nearly nine million people in parts of Texas, Oklahoma, Louisiana and Arkansas were in an enhanced area of risk Wednesday, putting them in the bull's-eye for some of the strongest storms, the national Storm Prediction Center said earlier Wednesday. The area of highest risk included the Dallas-Fort Worth metropolitan area.

In Louisiana, the National Weather Service issued a flash-flood watch for northern parts of the state until 7 p.m. Thursday. Forecasters say multiple rounds of strong to severe thunderstorms will produce two to four inches of rain, and perhaps six inches in some parts of the state.

"Heavy rain from waves of storms could renew flooding over north Louisiana," said Cynthia Palmer, a forecaster at the weather service's office in Shreveport, Louisiana.

The ground remains saturated in that part of the state, which saw record flooding earlier this month, Palmer said.

In northern Mississippi, forecasters said thunderstorms would bring rainfall amounts of two to four inches. A flash-flood watch was in effect through Thursday evening.

As the system moves east, strong storms were expected to develop early Thursday over Alabama, where forecasters say the main threats will be tornadoes, winds of up to 70 mph, quarter-sized hail and heavy rains.

In Georgia, forecasters said more than four inches of rain could fall in western parts of the state.

The possibility of additional tornadoes remained from the storms that hit Oklahoma, Jankowski said. She said that while the system wasn't as strong as when it passed through the Tulsa area, it still has the structure to produce tornadoes.